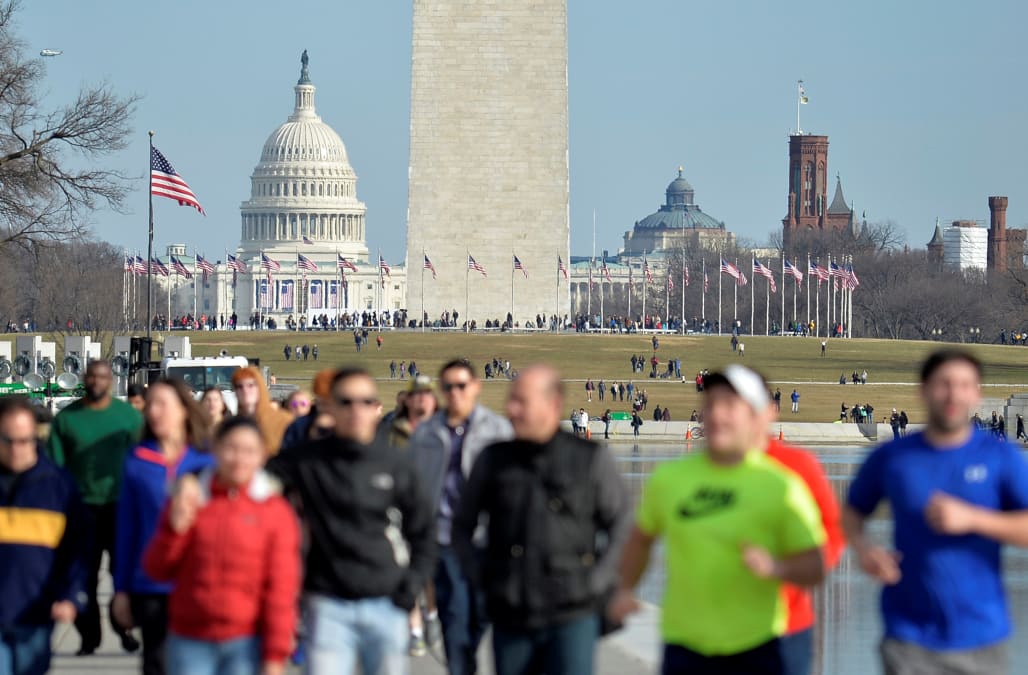 Donald Trump's voice won't be the only one heard at this year's inauguration.

Tens of thousands of people are preparing to hit the streets of Washington D.C. during the 45th president's inaugural week. While some will march in support of the president or various causes, a growing number will be on hand to show their opposition to the newly elected president and his administration.

The National Park Service has provided 22 permits for First Amendment events that will take place over inauguration week on park service land that includes the National Mall and the White House. Each protest ranges in size from 50 people to 200,000, however, any protest less than 25 people does not require a permit.

Related: 'Soft Sensuality': What to Know About Donald Trump's Inauguration

"The permit applications we received this year are a considerable uptick," Mike Litterst, public affairs officer of the National Mall and Memorial Parks, said, adding that they typically have only provided about a half dozen for past inaugurations.

D.C.'s Department of Homeland Security and Emergency Management has been preparing for the protests and the inauguration crowds since April. They're expecting 800,000 - 900,000 people to attend overall, which is significantly less than Obama's inauguration in 2009 that drew 1.8 million and forced the city into gridlock.

And the DHS will continue to examine hotel occupancy rates, buses and social media sites to try to gain a better understanding of the crowd's potential size as initial estimates could change.

Christopher Geldart, the director of the D.C. Department of Homeland Security and Emergency Management, said that 3,200 police officers from across the country will be on the parade route to provide security. Obama's first inauguration had 2,500, and his second had 3,000. Inauguration security expenses are expected to exceed $100 million this year.

The largest protest is expected to come the day after Trump's inauguration. According to the permit they acquired for 200,000 demonstrators and the responses they've received via social media, the Women's March on Washington is predicted to draw hundreds of thousands of protesters in the nation's capital on Jan. 21, although there will be corresponding protests across the country.

"It's quite noteworthy. If they get those kinds of numbers, it will far exceed any previous inaugural protest," said Inaugural Historian Jim Bendat, author of "Democracy's Big Day: The Inauguration of Our President, 1789-2013."

Related: Immigrant Groups Rally Around Country as Message to Trump

Bendat noted that the women's march reflects a similar demonstration in the early 20th century. A day prior to the first inauguration of Woodrow Wilson, 5,000 to 8,000 suffragists got a parade permit and marched down Pennsylvania Avenue demanding the women's right to vote.

"If you think about it, that's a lot of people for that era given transportation difficulties," Bendat said.

Ben Becker, an activist helping to organize the ANSWER Coalition's two prominent protests along the inaugural parade route, said it is unsurprising that there is this much interest in demonstrations opposed to the incoming administration.

While he said his organization applied for permits a year ago and planned to protest no matter the victor, entire communities were energized to share their disapproval of Trump.

"Trump has triggered a wave of protest and outrage across the country," Becker said. "His election has itself become a point of protest for women, Muslim communities, for immigrants, for people who care about education, social security, Medicare — the list is almost limitless in terms of the people who feel threatened by what a Trump presidency would mean."

Like many protest organizations, ANSWER wanted to have a prominent position at the inauguration because, according to Becker, they wanted the world, international media and Trump himself to see their opposition.

Related: All the Performers Confirmed for Donald Trump's Inauguration

But some protesters don't think being seen is enough.

DisruptJ20 is a new organization that started organizing six months ago in preparation of the inauguration. Curated by local D.C. activists, the group aims to use direct intervention to interrupt the inaugural process.

"The idea is to shut down access to the parade as much as possible and slowing it down to a crawl," said DisruptJ20 organizer Legba Carrefour. "Then there's the broader goal of shutting down the entire city around it and creating a sense of paralysis that creates a headline that says, 'Trump's inauguration creates chaos.'"

Interim D.C. Police Chief Peter Newsham said that the police were prepared for potential disruptions at the Inauguration and mentioned the size of the security presence, which will include 5,000 National Guardsman.

But groups like DisruptJ20 are aware of this and continue to run their "Action Camps" with names like "What's Race Got to Do With It? Things White Activists Need to Know" and "How to Talk to a Nazi: Protection and Preparation for a Fascist Society."

Their hope is that they can engage potential activists and teach them how to effectively protest during the inauguration and in the future.

"It's kind of a limp thing just walking in the street rather than taking direct action in what is exactly going on. Then again, we are still marching in the street with a permit," Carrefour explained, citing how effective civil disobedience was during the Civil Rights Movement. "We really embrace all tactics."

Boris Epshteyn, the director of communications for Trump's inaugural committee, has stated in multiple interviews that protesters are well within their rights to demonstrate as long as they follow the applicable laws, rules and regulations, but the largest group demonstrating in support of Trump have a slightly stricter view.

Bikers for Trump have a permit for 5,000 individuals, and, though the organization did not respond to calls for comment from NBC News, their president Chris Cox told Fox & Friends on Friday that they planned to put their bodies in the way of anti-Trump protesters.

"In the event we are needed, we certainly will form a wall of meat," Cox told the Fox News anchors about his organizations, which he said had grown as large as 200,000 members since it first formed 15 months ago.

"We'll be shoulder-to-shoulder with our brothers and toe-to-toe with anyone," he added.

Trump and his supporters have often dismissed demonstrations like the ones Carrefour and Becker are organizing, claiming that they are filled with professional protesters who are being paid to appear.

Both Carrefour and Becker roundly rejected this accusation, which was made throughout the campaign by Trump and others with no evidence.

"In my work as an activist, I have been accused of being funded by the following people: George Soros, George Michael, ancient aliens, the Catholic Church and ancient aliens who have since founded the Catholic Church," Carrefour said, noting that he and his fellow activists scrape by and would reject any kind of financial backing. "It's absurd and it's not true."

"There are people who have given a lot of their lives to fight for the communities that have been consistently under attack whether it's under a democratic or republican administration," he said. "To deride or dismiss people who are fighting for a better world is the height of cynicism."

All anti-Trump protesters shared the belief that inauguration day would only be the beginning, as they trust that the incoming administration will continue to take a hostile tone toward minorities and various other stakeholders.

The goal is to start big and then take the organizing outside of Washington D.C. to smaller communities across the country.

"It's not a one day event," Becker said. "It's day one of a larger resistance."