CBO: The GOP's Obamacare repeal could leave 27 million people without health insurance and cause premiums to skyrocket 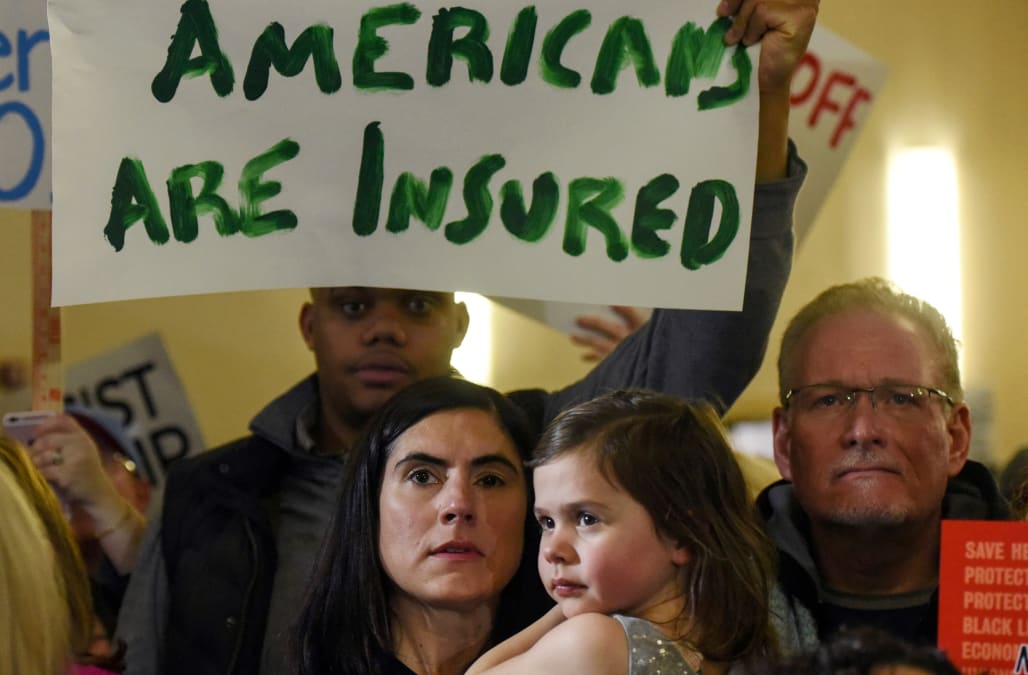 The Congressional Budget Office (CBO), the nonpartisan office within the legislature that provides research on the impact of possible policies, said in a report on Tuesday that the partial repeal of the Affordable Care Act (ACA), better known as Obamacare, would have huge effects on the US healthcare system.

According to the report, the partial repeal proposed by Republicans would lead to a huge increase in the number of uninsured Americans and skyrocketing premiums for those in the individual insurance market.

SEE ALSO: Trump promises 'insurance for everybody' with his Obamacare replacement

The report expands on an analysis done last year by the CBO that analyzed the effects of a GOP-led repeal of various provisions of the ACA. Currently, Republicans have proposed rolling back the individual mandate, Medicaid expansion, and subsidies for people purchasing insurance in the individual marketplace.

The CBO analysis also accounts for the fact that, as Republicans have promised, the repeal will leave intact provisions such as adult children being able to stay on their parents' insurance through the age of 26 and the inability of insurers to deny coverage based on a pre-existing condition.

Of note, the CBO projections are based on the 2015 ACA repeal bill that was vetoed by President Obama. A new repeal bill is currently being drafted and could have some differences, though the GOP's message on its goals have been roughly the same. Additionally, congressional Republicans and President-elect Donald Trump have promised to quickly create a replacement for the health care law, and these projections do not take the possible effects of such a bill into account.

In terms of coverage, the CBO projects that the increase in the number of uninsured under a partial repeal would be dramatic.

"The number of people who are uninsured would increase by 18 million in the first new plan year following enactment of the bill," said the report. "Later, after the elimination of the ACA's expansion of Medicaid eligibility and of subsidies for insurance purchased through the ACA marketplaces, that number would increase to 27 million, and then to 32 million in 2026."

In addition to the effects on insurance coverage from a repeal, the CBO report estimates that premiums would increase 20-25% more than they would if the ACA were kept in place over the next year. If a full repeal occurs, this would hit 50% over current projections of premium increases under the ACA. One of the main Republican complaints about Obamacare is the increase in premiums for 2017.

"The majority of that increase would stem from repealing the penalties associated with the individual mandate. Doing so would both reduce the number of people purchasing health insurance and change the mix of people with insurance—tending to cause smaller reductions in coverage among older and less healthy people with high health care costs and larger reductions among younger and healthier people with low health care costs. Thus, average health care costs among the people retaining coverage would be higher, and insurers would have to raise premiums in the non-group market to cover those higher costs."

The CBO also projects that a partial repeal while keeping the popular provisions of the ACA would lead insurers to ditch the individual marketplace at a rapid pace.

"After weighing the evidence from prior state-level reforms and input from experts and market participants, CBO and JCT estimate that about half of the nation's population lives in areas that would have no insurer participating in the non-group market in the first year after the repeal of the marketplace subsidies took effect, and that share would continue to increase, extending to about three-quarters of the population by 2026," said the report.

Essentially, this would create what Republicans themselves have called the "death spiral." With no incentive from the individual mandate for younger and healthier Americans to stay in the insurance marketplace, the pool of people covered would become dominated by sicker people that need the coverage.

The increasing cost of covering these people would cause more and more insurers to ditch the individual market, leaving fewer choices and even higher prices.

While the concerns raised by the CBO may be addressed by a replacement plan through block subsidies and other proposals, the possibility of a repeal without a plan to replace would be a disaster for the individual marketplace based on the CBO report.

Politicans of either saide of the aisle were quick to jump on the report. Democratic lawmakers used the report as a sign that repeal is dangerous, while the GOP was quick to dismiss the findings.

Paul Ryan spokesperson AshLee Strong responded to the report in a statement, saying "This projection is meaningless, as it takes into account no measures to replace the law nor actions that the incoming administration will take to revitalize the individual market that has been decimated by Obamacare."

Additionally, House Majority Whip Rep. Steve Scalise tweeted that the CBO report "assumes no Obamacare replacement" and that the replacement will actually "provide people with coverage that they want and can actually use."

On the other hand, Democratic Senate Minority Leader Chuck Schumer tweeted that the report showed the dangers of repeal.

"CBO report says premiums will skyrocket under GOP's plan," tweeted Schumer. "Why are they raising costs & taking us from #CaretoChaos? #MakeAmericaSickAgain."

NOW WATCH: A new study just blew a hole in one of the strongest arguments against global warming

SEE ALSO: This is what could happen if Obamacare is repealed