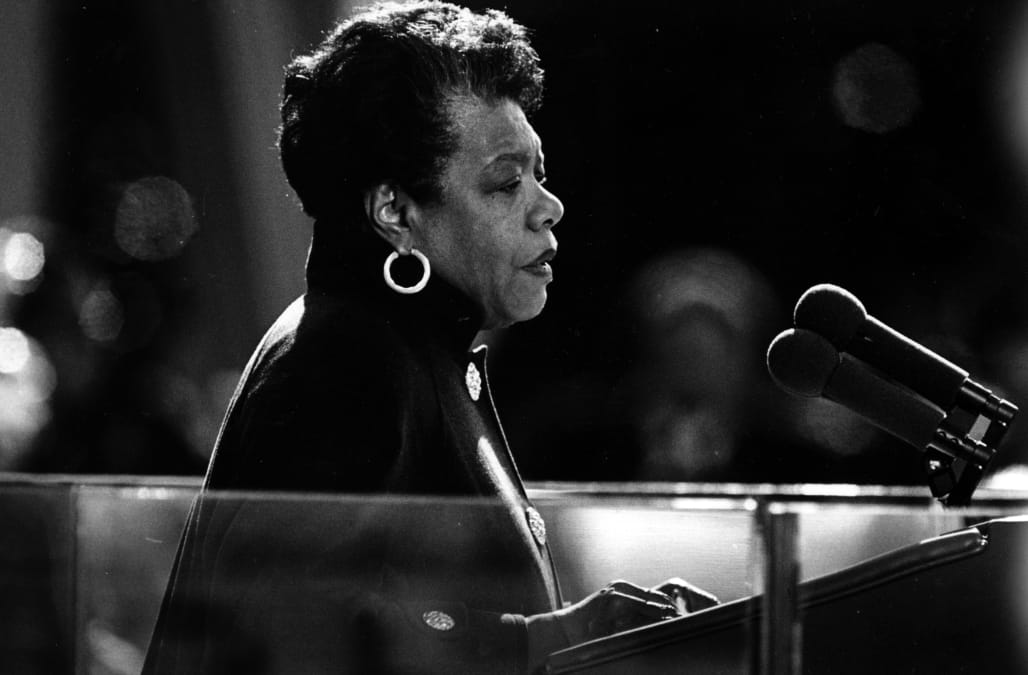 A high school in Pennsylvania is under fire for asking about the childhood sexual assault of Maya Angelou in an assignment, reports CBS News.

Students at Pennridge High School were given questions which included a mix of math and reading comprehension from Angelou's book 'I Know Why The Caged Bird Sings.'

A tweeted screenshot of the page shows a math problem followed by a statement that reads, "Angelou was sexually abused by her mother's [blank] at age 8, which shaped her career choices and motivation for writing."

Poet and activist Dr. Maya Angelo gives a thumbs up to the delegation after her speech during the second night of the Democratic National Convention at the FleetCenter in Boston, July 27, 2004. Democratic presidential candidate Senator John Kerry is expected to formally accept the party's nomination July 29.

Publisher and talk show host Oprah Winfrey rests her head on the shoulder of poet and author Maya Angelou during a photo opportunity May 5, 2001 before the two participated in a one-on-one dialogue at the Simmons Graduate School of Management Leadership Conference in Boston.

Oprah Winfrey laughs with poet Maya Angelou during the taping of "Oprah's Surprise Spectacular" in Chicago May 17, 2011. Winfrey kicked off one of her last-ever national talk shows on Tuesday with hugs from Tom Hanks, Tom Cruise and Madonna in a packed Chicago arena.

Poet and activist Maya Angelou speaks before delegates during the second night of the 2004 Democratic National Convention at the FleetCenter in Boston, July 27, 2004. More than 4,000 delegates to the convention will nominate John Kerry to challenge President George W. Bush in a November battle for the White House that is essentially a dead heat.

Below it is another pair of equations then the statement, "Trying to support her son as a single mother, she worked as a pimp, prostitute and [blank]."

Students would solve the math problems then learn the corresponding answers to the English questions.

After parents complained, Jacqueline Rattigan, Pennridge Superintendent, issued a statement, saying that "We apologize to anyone who was offended by the content of the assignment and have taken steps to avoid such occurrences in the future."

She is also quoted as explaining, "The homework worksheet in question was downloaded from a website that allows teachers around the world to share educational resources. It is not part of our approved curriculum."

More from AOL.com:
A 1,000-foot-thick ice block about the size of Delaware is snapping off of Antarctica
Winter storm hits US South with rare snowfall
20 best family movies of 2016