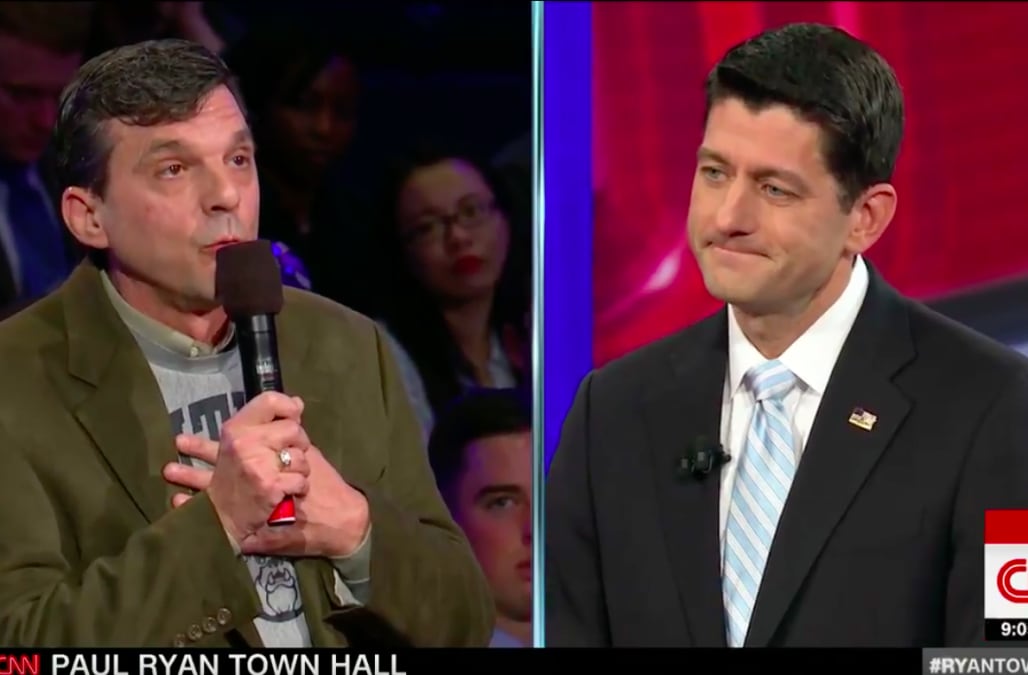 Jeff Jeans, a cancer survivor who owns a small business in Arizona, confronted House Speaker Paul Ryan during a CNN town-hall event Thursday night over the future of the Affordable Care Act, the healthcare law better known as Obamacare.

Jeans said he was a lifelong Republican who worked on the campaigns of Ronald Reagan and George H.W. Bush and that he disliked the ACA when it was passed.

"Just like you, I was opposed to the Affordable Care Act," Jeans told Ryan. "When it was passed, I told my wife we would close our business before I complied with this law."

But then he said the law saved his life. Soon after it passed, he said, he learned he had cancer and was given six weeks to live. He said he was able to get insurance, which allowed him to receive treatment, through the Affordable Care Act.

As Ryan began his answer, saying the GOP planned to replace the law when repealing it, Jeans interrupted to add a message onto his question.

"Can I say one thing?" Jeans said. "I want to thank President Obama from the bottom of my heart because I would be dead if it weren't for him."

SEE: Protests for and against Obamacare:

Ryan said Republicans planned to replace Obamacare with high-risk pools, which had been used by states before the ACA was passed, so that Jeans and others could continue to get coverage. Health-policy experts have been wary of this plan because of the low enrollment and prohibitively high costs in previous state-level pools.

While Republicans have been pushing for the law to be repealed and replaced, Democrats and the Obama administration have been highlighting the positive effects of the law — using stories much like Jeans' to try to get the GOP to preserve some of the more popular provisions of the law.

The first legislation that would advance a repeal of the ACA was passed by the Senate early Thursday morning and was scheduled to be voted on by the House on Friday.

Watch the exchange from CNN below:

#RyanTownHall attendee: "I want to thank Pres. Obama from the bottom of my heart" because Obamacare saved my life https://t.co/uZSKCadyfDpic.twitter.com/gqZzKR3qfo

NOW WATCH: These are Stratfor's chilling predictions for 2017

More from Business Insider:
The GOP is pumping the brakes on repealing Obamacare
The Senate is about to kick off its repeal of Obamacare
Despite the looming threat of repeal, more people than ever are signing up for Obamacare