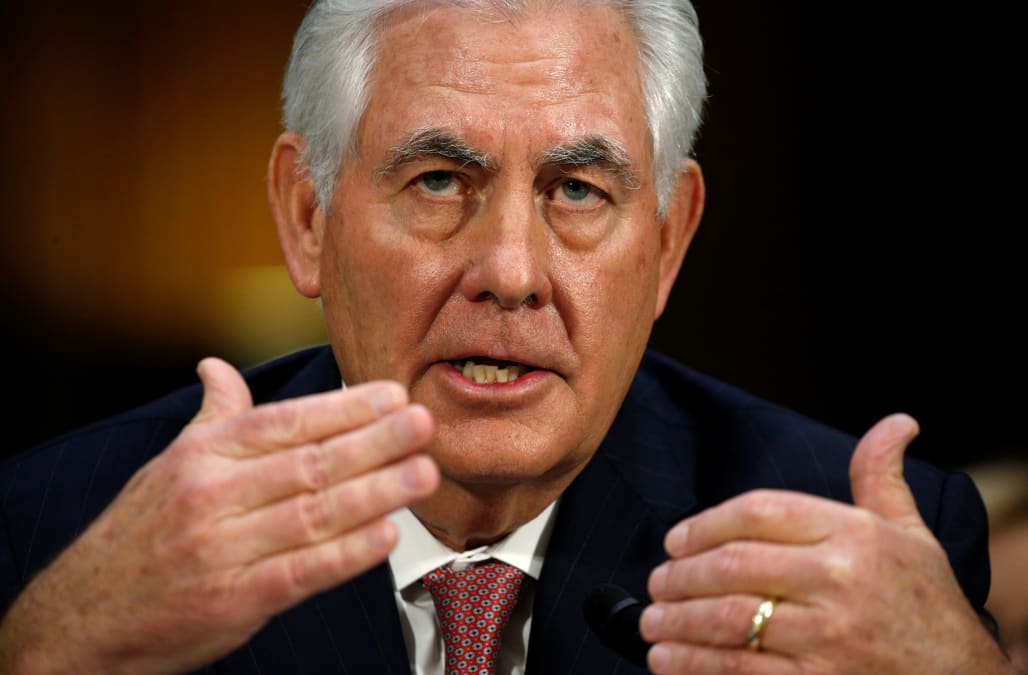 ExxonMobil CEO Rex Tillerson was grilled by the Senate Foreign Relations Committee on Wednesday about his qualifications to be secretary of state — a process which shined a bright light on some major policy schisms Tillerson has with his would-be boss, President-elect Donald Trump.

Tillerson disagreed with Trump on some of the president-elect's key issues, including a ban on Muslims immigrating to the United States and nuclear proliferation.

The disagreements are unusual, given that cabinet members are expected to be an extension of the president they serve, tasked with carrying out a president's goals and agenda in their respective policy arenas.

Here are the major policy disagreements between Tillerson and Trump revealed in Wednesday's confirmation hearing.

Trump has a pretty scary fascination with nuclear weapons. Last month, he tossed aside years of nuclear weapons policy and called for the U.S. to increase its nuclear capability. "Let it be an arms race," he added later.

Yet, on Wednesday, Tillerson said he disagreed with Trump's call for an arms race, saying one of the State Department's "vital goals" is to pursue nuclear nonproliferation.

"Do you agree with Mr. Trump when he said it wouldn't be a bad thing if Japan, South Korea or Saudi Arabia acquired nuclear weapons?" Sen. Ed Markey (D-Mass.) asked Tillerson at the hearing.

"Senator, I don't think anyone advocates for more nuclear weapons on the planet," Tillerson responded, adding that he did not agree with Trump's believe that it's OK for those three countries to develop nuclear weapons.

Tillerson: It's one of the "vital roles" of @StateDept to pursue nuclear nonproliferation.

One of the defining moments of the campaign was Trump's call for a ban on Muslim immigration to the United States. Trump released a statement declaring Muslim immigration should be "shut down" until "representatives can figure out what is going on."

Trump's top staff say Trump no longer holds that policy, instead saying he'd employ "extreme vetting." But Trump himself has never explicitly backed away from the plan, telling reporters at Mar-a-Lago in December, in reference to the Muslim ban, "You know my plans all along and I've been proven to be right, 100% correct."

Asked about past plan to ban Muslims from entering US, Trump: "You know my plans. All along it's proven to be right. We're 100% correct"

When asked about that during the confirmation hearing, however, Tillerson said he disagreed with Trump's plan.

"No, I do not support a blanket-type rejection of any particular group of people," Tillerson said in response to a line of questioning from New Hampshire Democratic Sen. Jeanne Shaheen.

Donald Trump has called global warming a "hoax invented by the Chinese."

The concept of global warming was created by and for the Chinese in order to make U.S. manufacturing non-competitive.

But Tillerson said at his confirmation hearing "the risk of climate change does exist," and added "the consequences of it could be serious enough that actions should be taken" — a break from his would-be boss.

Trump also said he wanted to "cancel" the Paris Climate Agreement, which nearly 200 countries signed in 2015 to reduce carbon emissions. Since then, Trump has said he has an "open mind" about the deal, but has never unequivocally said he would keep it.

Tillerson, however, said Wednesday he is against the U.S. pulling out of the deal.

Tillerson on Paris climate agreement: "We're better served by being at that table than leaving that table."

"We're better served by being at that table than leaving that table," the lifelong oil company executive told the Senate panel.

Trump caused an uproar during the campaign in July when he said he would have to look at whether a NATO ally had "fulfilled its obligations" before deciding to come to its rescue.

Tillerson, in his confirmation hearing, said he would "not recommend that."

Trump centered much of his campaign around renegotiating trade deals, denouncing the Trans-Pacific Partnership in particular and promising to kill the trade deal once he took the office.

"On trade, I'm going to issue a notification of intent to withdraw from the Trans-Pacific Partnership, a potential disaster for our country," Trump said in a video announcement in November, shortly after winning the White House.

"I do not oppose" TPP, Tillerson said, according to CNN.

More from Mic.com:
Rex Tillerson will make another $180 million if confirmed as Trump's secretary of state
Takeaways from Senate confirmation hearings: The latest on Rex Tillerson and Jeff Sessions
Top intel officials say Russia has compromising info on Donald Trump