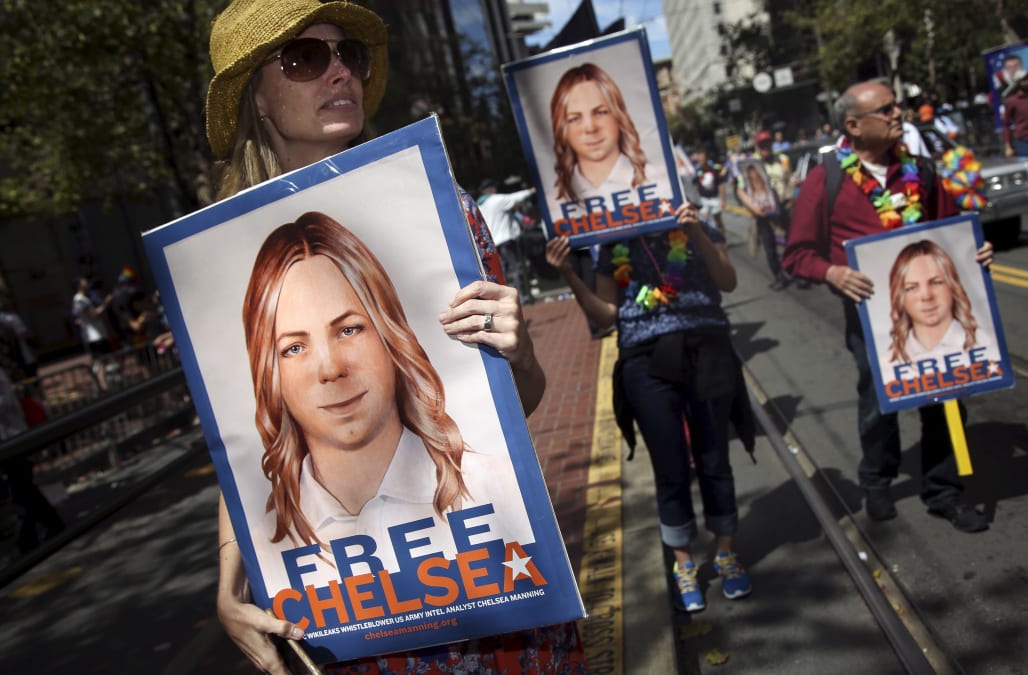 A decision could come as soon as Wednesday for Manning, who has tried to commit suicide twice this year and went on a hunger strike in a bid for gender reassignment surgery.

"I have more hope right now than I have the entire time since she was sentenced," Manning's aunt, Deborah Manning, told NBC News.

"I do think it's the last hope for a while."

Chelsea Manning
A combination photo shows U.S. soldier Chelsea Manning, who was born male Bradley Manning but identifies as a woman, imprisoned for handing over classified files to pro-transparency site WikiLeaks, being escorted by military police at Fort Meade, Maryland, U.S. on December 21, 2011 (L) and on June 6, 2012 (R) respectively. U.S. soldier Chelsea Manning, imprisoned for passing classified files to WikiLeaks, now stands accused of misconduct stemming from her suicide attempt earlier this month and could land in solitary confinement indefinitely, her lawyers said on July 28, 2016. REUTERS/File Photos
Up Next

Manning — then known as Bradley — was locked up in 2010 after swiping 700,000 military files and diplomatic cables and giving them to Wikileaks.

Prosecutors branded Manning a "traitor" seeking notoriety in the world of hackers and anarchists. Manning's lawyers painted their client as a naive whistle-blower who caused little more than mortification.

Manning pleaded guilty and before the sentencing delivered an apology to the court — and the nation. A recording of that statement is being broadcast for the first time by NBC News.

"I understand that I must pay the price for my decisions and actions," Manning added.

Those words of contrition did not sway the military judge, who gave Manning a sentence about 10 times longer than those of recent whistle-blowers.

Manning — who announced she was a transgender woman named Chelsea the day after the verdict — didn't seem to process what the sentence meant for her, her aunt said.

"I don't think it really sunk in," Deborah Manning said. "Thirty-five years is just a long thing to try to imagine, especially when you're just in your early 20s."

Manning's supporters believe the harshness of the sentence can be traced to another leaker; the scandal around former NSA contractor Edward Snowden was erupting around the same time.

"I really believe the judge felt she needed to send some sort of message," the aunt said. "I think in a way she was a scapegoat for Edward Snowden."

Snowden, who has asked Obama for clemency, tweeted his support of Manning shortly after NBC News' report about the commutation decision aired on TODAY on Wednesday morning.

Four former and current Army intelligence officers told NBC News the documents leaked by Manning pale in significance to highly classified top secret material released by Snowden. The officers, who would not allow their names to be used, said the Manning sentence seems excessive.

The Manning leak included video of a deadly 2007 air strike in Baghdad in which the U.S. helicopter crew could be heard laughing about the casualties and State Department cables with blunt comments from American diplomats.

"I don't think any harm was done," Coombs said of the disclosures. "A lot of embarrassment, certainly."

Alexa O'Brien, a freelance journalist, covered the trial and sat in the courtroom every day. She said she believes Manning did not mean to harm the U.S. and that the pre-sentence apology was genuine.

"Everything she said in that statement is completely morally and ethically consistent with what she said when she pled to 10 lesser or included offenses," O'Brien said.

Last month, more than 100,000 people signed an online petition seeking commutation of Manning's sentence, meeting the threshold for a White House response within 60 days. The American Civil Liberties Union and gay-rights groups have also been lobbying for a reprieve.

In their petition to President Obama, Manning's legal team cited the need for better medical care for gender dysphoria, a condition that includes severe distress or anxiety by some transgender people.

Manning has been receiving hormone therapy at the Leavenworth military prison and is allowed to wear women's undergarments, but a military doctor recently refused to change her gender on her Army records.

"I would say this is someone who's never had a chance in life, who is extremely bright, who became extremely emotionally distressed as some point, who made a bad decision, who paid for that bad decision," Deborah Manning said.

"And it's time to let her go out and try to make a positive contribution in the world."

More from NBC News:
He has her on the 'short list,' but will Obama free Chelsea Manning?
Eric Holder hired for California's legal battles against Trump
105-Year-Old Cyclist Sets New World Record