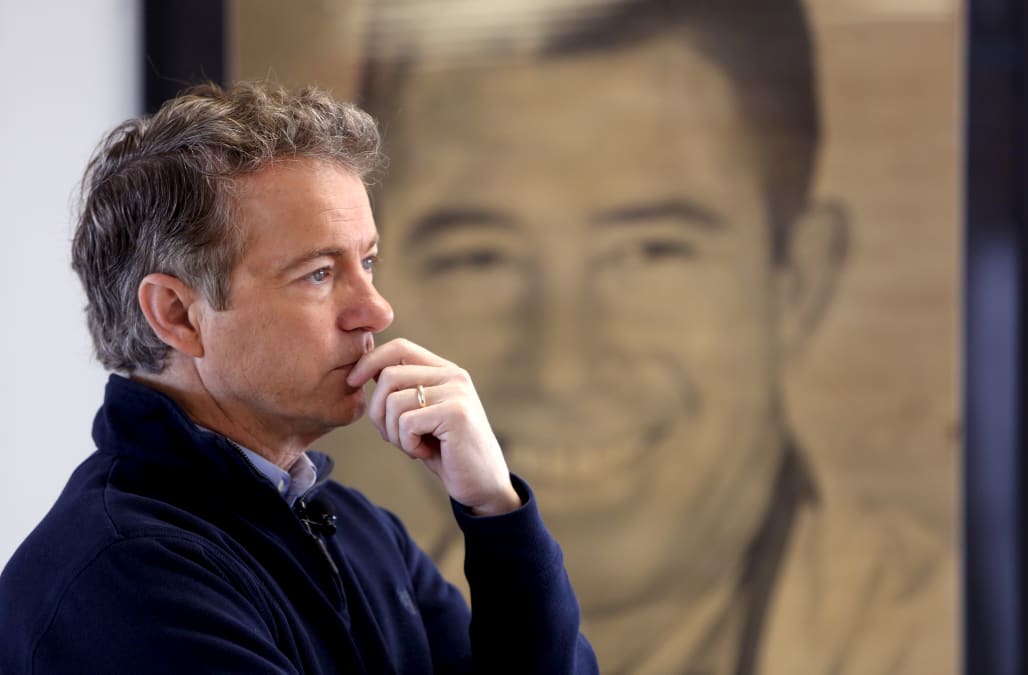 Sen. Rand Paul (R-KY) may have just derailed congressional GOP leaders' efforts to swiftly repeal the Affordable Care Act without a clear replacement plan in hand. He did it by apparently enlisting the support of President-elect Donald Trump in concocting an alternative health insurance program that could garner widespread support within their party.

Paul and a small handful of other Senate Republicans have raised concerns about GOP leaders forging ahead with a budget "reconciliation" bill that would repeal key provisions of Obamacare -- including premium subsidies and new taxes to finance the program– without immediately addressing the impact on more than 20 million Americans enrolled in plans and insurers likely incur huge losses.

"We should repeal Obamacare, but partial repeal will only accelerate the current chaos and may eventually lead to calls for a taxpayer bailout of insurance companies," he wrote recently.

Now Paul, 53, a libertarian who ran an unsuccessful campaign for president last year, is attempting to thrust himself in the middle of the GOP debate over how best to keep a solemn campaign pledge to obliterate Obamacare within weeks of Trump taking power -- but without triggering an angry backlash from millions of people who likely would lose their coverage.

Paul says he is working on a replacement plan of his own. It is one made up of some of the best ideas floated by Republicans in recent years, and he hopes to have it ready for Trump's consideration early this week.

He told Politico Monday that Trump called him last Friday night after seeing an interview in which Paul said that Congress should vote on an Obama replacement at the same time it repeals the law.

Related: Obamacare Repeal Could Push Rural Hospitals to the Brink

"He said he was in complete agreement with that," Paul told Politico, after tweeting out the news last week.

I just spoke to @realDonaldTrump and he fully supports my plan to replace Obamacare the same day we repeal it. The time to act is now.

Trump told CBS's "60 Minutes" shortly after the Nov. 8 election that he would like to see repeal and replacement of Obamacare handled simultaneously, although he subsequently backed away from any specific timetable.

Yesterday, Trump told reporters in New York that he's "not even a little bit worried" about how Republicans will replace Obamacare, and that in the end everything will work out. Senate Majority Leader Mitch McConnell of Kentucky said over the weekend that Congress would follow up Obamacare repeal legislation with a replacement program "very quickly," but without setting a timetable. House Speaker Paul Ryan (R-WI) said last week that he was confident a replacement plan could be approved by the end of this year.

But this is no simple task. Getting all the stakeholders—hospitals, doctors, insurance companies, governors of states that expanded Medicaid—to agree on a framework is like holding a tenant's meeting in a New York City apartment building.

Related: Obamacare Repeal Is a Fiscal Minefield for the GOP

Senior Republican lawmakers, including Sen. Lamar Alexander of Tennessee, the chair of the Health, Education and Labor Committee, has warned that it could take as long as two years before Congress finally sorts out a replacement for the Affordable Care Act that could garner some needed Democratic support.

Paul says he's not trying to be the fly in the ointment but a catalyst for speeding up the process by pressing for simultaneous consideration of repeal and replacement legislation. Senate and House GOP Leaders are determined to stage votes this week and next on the preliminary budget action required to authorize committees in both chambers to draft the specific language for repealing Obamacare subsidies, taxes and mandates. That process could take weeks or months before a final plan is stitched together and approved by the House and Senate.

RELATED: A look back at Obama's tenure in office


Democrats and other critics say it's reckless of Trump and his GOP allies on Capitol Hill to rush to repeal the 2010 law before they can agree on a comprehensive replacement plan that preserves coverage for millions of Americans who signed up for Obamacare and prevents the insurance markets, health care providers and the pharmaceutical industry from falling into a financial death spiral.

Paul is not alone in his effort to forestall a vote on repealing Obamacare until a consensus emerges on replacement legislation. Others including Sens. Susan Collins of Maine, Tom Cotton of Arkansas, Bob Corker of Tennessee and Bill Cassidy of Louisiana have also voiced support for a coordinated approach. And with a relatively modest 52 to 58 seat majority, McConnell can't afford more than two to three defections to achieve his goals.

Related: Republicans Are Having Second Thoughts About Scrapping Obamacare Taxes

Paul didn't offer any details yesterday concerning what he would include in his healthcare bill. He wrote in an op-ed recently that Obamacare should be replaced with "freedom" to choose inexpensive insurance free of government dictates. He also said he favors allowing unlimited savings in health savings accounts and authority for major insurers to sell policies across state lines – proposals that Trump has also endorsed.

Health and Human Services Secretary Sylvia Mathews Burwell delivered a farewell address on Monday warning of a looming chaotic situation in which tens of millions of Americans could lose their coverage.

"I think we haven't seen a real [Republican] proposal for replacement," she said in responding to a question about whether any of the GOP proposals being floated might be acceptable to the Democrats. "We have not seen a plan that can be measured or scored" or that adequately addresses the need for broad coverage and access, affordable premiums and quality of health care.

Last night, Senate Democrats planned to deliver floor speeches and Facebook Live broadcasts denouncing the Republicans' efforts to unravel Obamacare and push for cuts in Medicare, Medicaid and Planned Parenthood, according to Huffington Post. Senate Democratic Leader Chuck Schumer of New York and his members also are preparing to slow Senate action on a budget "reconciliation" package to repeal key elements of Obamacare by offering scores of "poison pill" amendments late this week in a "Vote-a-Rama" that could last a day or more.

"If the Affordable Care Act is repealed without a replacement, the damage to the country's individual insurance market will begin this spring," Burwell said in her speech. "If health insurance companies don't know what the market will look like going forward, many will either raise prices or drop out. That means more Americans won't be able to afford coverage, and others won't be able to find it at all."

While estimates vary on the potential adverse effect of a repeal of Obamacare, a recent Urban Institute study concluded that as many as 30 million Americans could lose their coverage. The share of non-elderly people lacking insurance coverage would increase from 11 percent to 21 percent – a higher rate of uninsured than before the advent of Obamacare.

"If Congress never enacts a comprehensive replacement, the consequences for American health care would be stark. We would not just go backwards – we would fall far behind where we started."