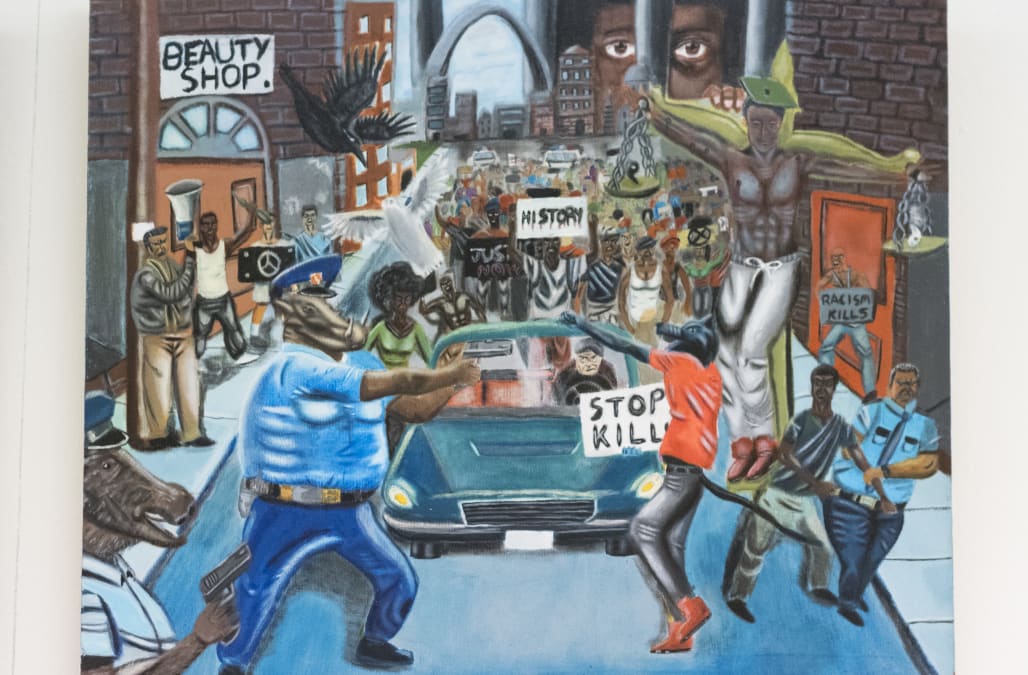 Democratic lawmakers are feuding with Republicans over a painting that is on display in the Capitol Building. The clash began last week after some GOP members criticized the artwork as discriminatory towards police.

Rep. William Lacy Clay, D-Missouri, filed a report against Rep. Duncan Hunter, R-California, on Tuesday after Hunter personally unscrewed the painting from the Cannon tunnel, arguing that its depiction of police as pigs in the picture was anti-police.

Controversial Capitol painting
SHAME on every member of the racist, anti-police @OfficialCBC for supporting hate in proudly displaying a hate painting. #BlueLivesMatter
Democratic messaging c. 2017: Make America Sick Again If not for us you’d have to watch football Re-hang the cops as pigs painting!
202 225 2460. Lacy Clay Congress Cop hater re-hangs painting depicting cops as pigs. Call this Democrat and let your feelings be known!
Democrat Rep. Lacy Clay (MO) hangs painting depicting police as pigs in US Capitol. Democrats, REALLY!! #Pathetic
@LacyClayMO1 You are a disgusting racist and should be censored! Take down that disgusting painting! #BlueLivesMatter #BlueLivesMatter
Put the frickin painting back on the wall, don't confirm that horrible racist, and get your kids vaccinated. I've had it .
Reminder that Republicans aren't concerned about the statues honoring racist white dudes in the Capitol, just a pai… https://t.co/QLoz5NhaN9
Thank you for removing racist painting from the Captiol, @Rep_Hunter. However, it's back on display. Make that painting a Hoffa. #SemperFi
Today is #LawEnforcementAppreciationDay & @LacyClayMO1 proudly displays anti-cop racist painting in capital. @thebestcloser #Closernation
@cvpayne Burn it. If they can burn the flag, we can burn their racist painting.
Lacey Clay one of the most racist politicians ever has hung a painting of police with pig heads in Capital. Getting out of hand. Hate crime.
@Rep_Hunter Thank's so much for taking down the disgusting anti cop painting in Capitol. Dems hanging it back up is equally disgusting.
As someone suggested, in addition to the anti-police painting at Capital Hill, I'm offering an anti-Islam Mohammad cartoon to be hung there.
Up Next

Clay was joined by members of the Congressional Black Caucus in pressing theft charges against Hunter after removing the artwork on Friday.

"He had no right to take that picture down," Clay told the Washington Post. "It's thievery."

"The rehanging of this painting for public view represents more than just protecting the rights of a student artist, it is a proud statement in defense of the 1st Amendment to the U.S. Constitution which guarantees freedom of expression to every American," the CBC said in a press statement.

The painting, created by high school student David Pulphus, earned its spot in the Capitol earlier this year after winning Clay's congressional art competition. However, neither Clay nor other U.S. representatives participated in the approval of the artwork, which was judged by an panel of art professionals.

"As it came down -- it can go back up," Hunter's chief of staff Joe Kasper stated in a email sent on Friday. "There's nothing appropriate about a painting that depicts police officers at pigs. Representative Hunter removed the painting and returned it."

The controversial painting was removed later on Tuesday by Rep. Doug Lamron, R-Wisonsin, who reportedly stated, "It doesn't belong here."

Photo had been hanging just an hour ago. Clay said @DougLambornCD5 took it back to his office saying "It doesn't belong here."

As of now, the painting has been restored to its post in the Cannon tunnel.

Related: Images of the Capitol through history