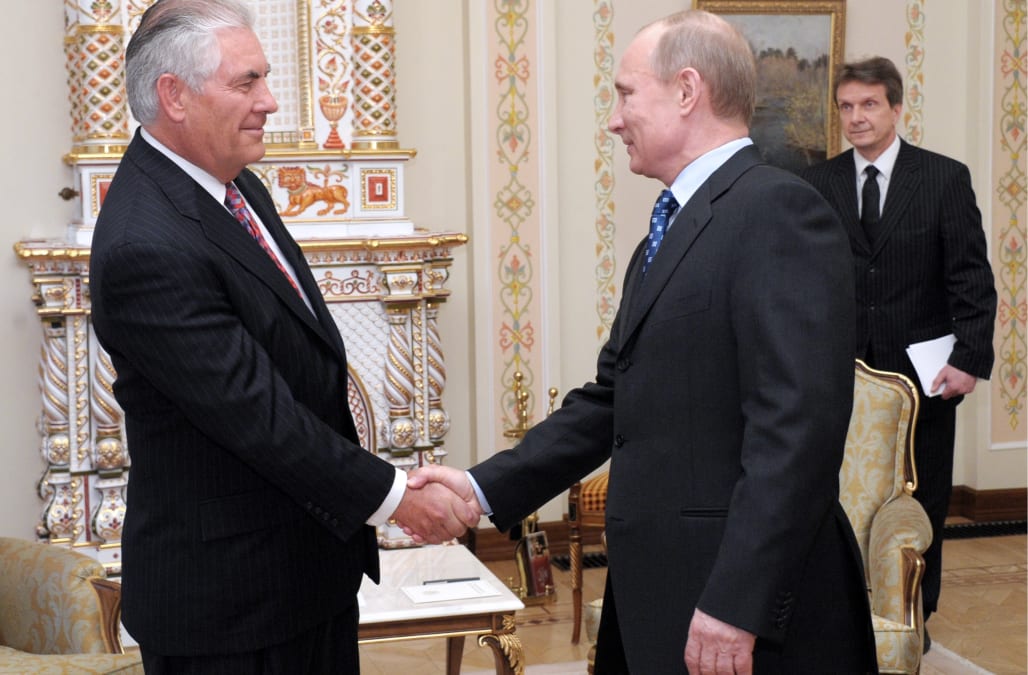 Members of President-elect Donald Trump's transition team appear to have widely disparate views on whether Russia poses a serious threat to American democracy and national security.

The divergence has emerged amid a public discussion — and Trump's skepticism — about the role of Russian hacking in the election.

Trump's pick to lead the CIA, Rep. Mike Pompeo, for one, is known for his hawkish stance on Russia and criticism of Russian President Vladimir Putin.

Putin "is heck-bent on changing the geopolitical future," Pompeo said at a forum in October 2015, shortly after Russia intervened in Syria on behalf of President Bashar Assad.

Pompeo criticized Secretary of State John Kerry's reaction to the Russian intervention as too weak. He said Kerry's decision to "deconflict airspace when the Russians attack in the Middle East" was "a change from consistent US policy — Democrat and Republican presidents alike — that said that the Soviets and now Russians will not have a foothold" in the region.

Trump's pick to succeed Kerry as secretary of state, meanwhile, is Rex Tillerson, the CEO of Exxon Mobil, who received the Russian Order of Friendship from Putin in 2013 and signed lucrative deals with Russia's state-owned oil company, Rosneft, to drill in the Arctic's Kara Sea.

Tillerson has come under fire from more hawkish members of the Republican Party. When asked on Wednesday if he would support Tillerson's nomination to lead the State Department, Arizona Republican Sen. John McCain, who has called Putin a "thug," replied, "Sure. There's also a realistic scenario that pigs fly."

In a speech at the conservative Heritage Foundation in May 2015, Mattis said Russia's aggression in eastern Ukraine and Crimea was "much more severe" and "more serious" than how it was being treated by either Washington or Europe, adding that the most dangerous near-term security threat facing the US "might be Russia."

Egyptian Chief of Staff of the Armed Forces Sami Anan shakes hands with US Commander of the Central Command James Mattis during a meeting in Cairo on March 29, 2011.

Kuwait Major General James Mattis, a high ranking Marine commander who also led troops into Afghanistan, visits Living Support Area one in Kuwait near the Iraqi border where troops are poised to begin a war against Iraq if called to do so by the President of the United States.

'We are already at war with Russia'

Trump's pick to lead the Department of Homeland Security, John Kelly, told Congress in 2015 that "we have seen a clear return to Cold War tactics" under Putin, and that Russia " is using power projection in an attempt to erode US leadership and challenge US influence in the Western Hemisphere."

Flynn, who led the Defense Intelligence Agency from 2012 to 2014, has appeared on and been interviewed by Russia Today network more than once. He has said he absolutely agrees that the US and Russia need to work together to defeat ISIS.

Pompeo has said Russia's claim that it intervened in Syria to fight ISIS was "a false narrative."

Trump's pick for deputy national security adviser, former Reagan administration official and Fox News commentator K.T. McFarland, said in late October, "We are already at war with Russia. We're at cyberwar with Russia." She suggested Washington could retaliate via new sanctions against the Kremlin, which President Barack Obama imposed in late December.

Trump's incoming press secretary, Sean Spicer, said on Sunday that the White House may have disproportionately punished Russia with the sanctions and expulsion of 35 Russian diplomats and that "there is zero evidence" the hacking changed the outcome of the election.

Related: Vladimir Putin through the years

In August, meanwhile, Pompeo said that Russia was among the "bad actors" using its "active cyber programs to steal emails" from the Democratic National Committee and former Secretary of State Hillary Clinton's private email server.

But Pompeo and Flynn apparently "share Trump's view that the intelligence community's position — that Russia tried to help his campaign — is an attempt to undermine his victory or say he didn't win," The Wall Street Journal reported, citing a transition official.

One of Trump's senior advisers, former CIA director James Woolsey, told CNN this week that "it is probably not always a good idea to say in these days and times that we know it was Russia, it was only Russia," that engaged in election-related hacking.

"I think the Russians were in there," Woolsey said, "but it doesn't mean other people weren't."

US intelligence agencies have concluded that senior Russian officials were involved in election-related hacking. The agencies provided no evidence that any other nation-states had hacked the emails along with the Russians.

Three intelligence officials told Reuters on Thursday that they have conclusive evidence that Russia not only orchestrated the DNC hacks, but also gave the stolen documents to the self-described transparency organization WikiLeaks.

"We assess that only Russia's senior-most officials could have authorized the recent election-focused data thefts and disclosures, based on the scope and sensitivity of the targets," the nation's top intelligence officials said in a statement to Congress on Thursday.

Julian Assange, the founder of WikiLeaks, told Fox earlier this week that "our source is not the Russian government and it is not a state party" — a claim Trump echoed on Twitter.

"Julian Assange said 'a 14-year-old could have hacked Podesta' – why was DNC so careless?" Trump tweeted. "Also said Russians did not give him the info!"

From the top down, it remains to be seen how the tensions both between members of Trump's team and between his administration and the intelligence community will play out once he takes office.

"I don't think they will need to or be able to reconcile all of their differences in the confirmation hearings," said Boris Zilberman, a Russia expert at the conservative Foundation for Defense of Democracies. "As with other administrations, you will have a number of natural tensions when it comes to world views and the tactics that should be undertaken to carry those views out."

More from Business Insider:
Trump to hold his first official press conference since July
It's time for Trump to come to his senses on nuclear weapons
WikiLeaks founder Julian Assange says he is 1,000% certain hacked emails didn't come from Russia