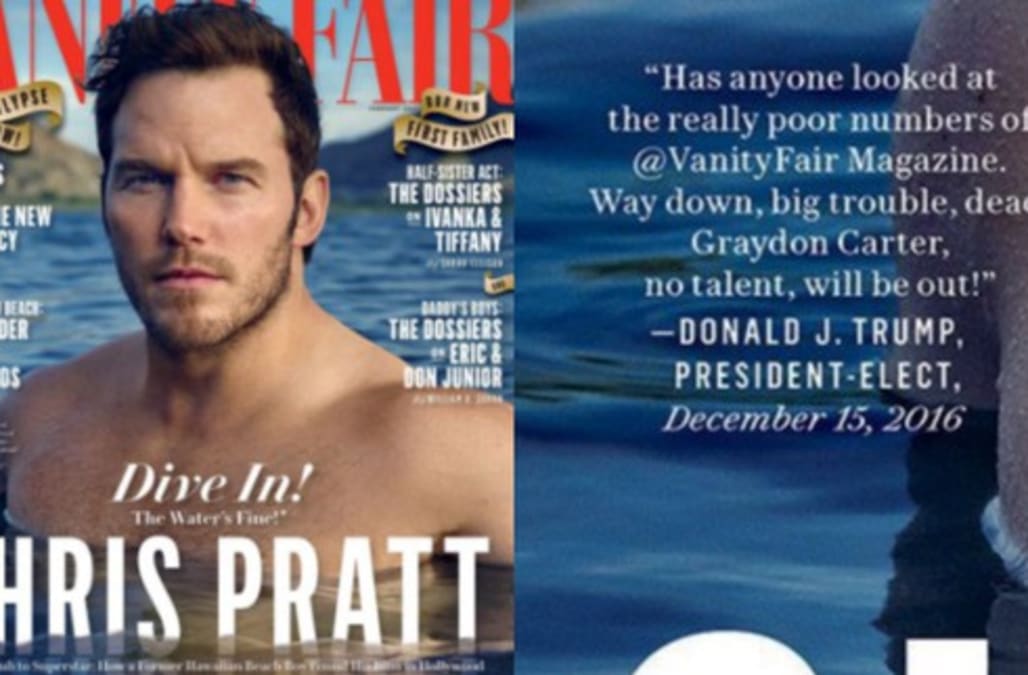 Vanity Fair, perhaps tied with the New York Times as the publication Donald Trump maligns the most, has featured one of Trump's insults on its February cover.

The tweet, which Trump fired off on Dec. 15 after Vanity Fair published a negative review of Trump Grill, is slightly to the left of cover star Chris Pratt's armpit — as honorable a position as any.

"Has anyone looked at the really poor numbers of @VanityFair Magazine," the tweet reads. "Way down, big trouble, dead! [Vanity Fair editor] Graydon Carter, no talent, will be out!"

The magazine made a similar move last year, plopping a Trump tweet stating that it had "lost almost all of it's [sic] former allure" on its May cover. That time, it was under Amy Schumer's armpit,

Vanity Fair goes with the "unexplained Trump tweet under @amyschumer's armpit" for this month's cover pic.twitter.com/AJGBgKGers

Donald Trump has made no secret of his dislike for Vanity Fair over the years, repeatedly calling the magazine "failing," "failing badly" and a "third rate stalker." He's referred to Carter with even more disdain, calling him a "loser with bad food restaurants." (Carter owns several eateries in NYC.)

Indeed, Trump's beef with Vanity Fair might be more personal than political. In the '80s, Eater reports, Carter began referring to Trump as a "short-fingered vulgarian" in SPY magazine, and kept up the epithets when he moved to Vanity Fair in the '90s.

And we all know Trump doesn't take well to insults.

Regardless, Vanity Fair seems to be coming out on top. The day after Trump's Dec. 15 tweet — the one now featured on the cover — subscriptions to the magazine increased 100-fold.

More from Mashable:
YouTuber dives deep to examine the madness that is Trump's Twitter
Mr. No Fun Paul Ryan shuts down kid who tries to dab
Dog owner perfectly demonstrates the best way to stop a snorer