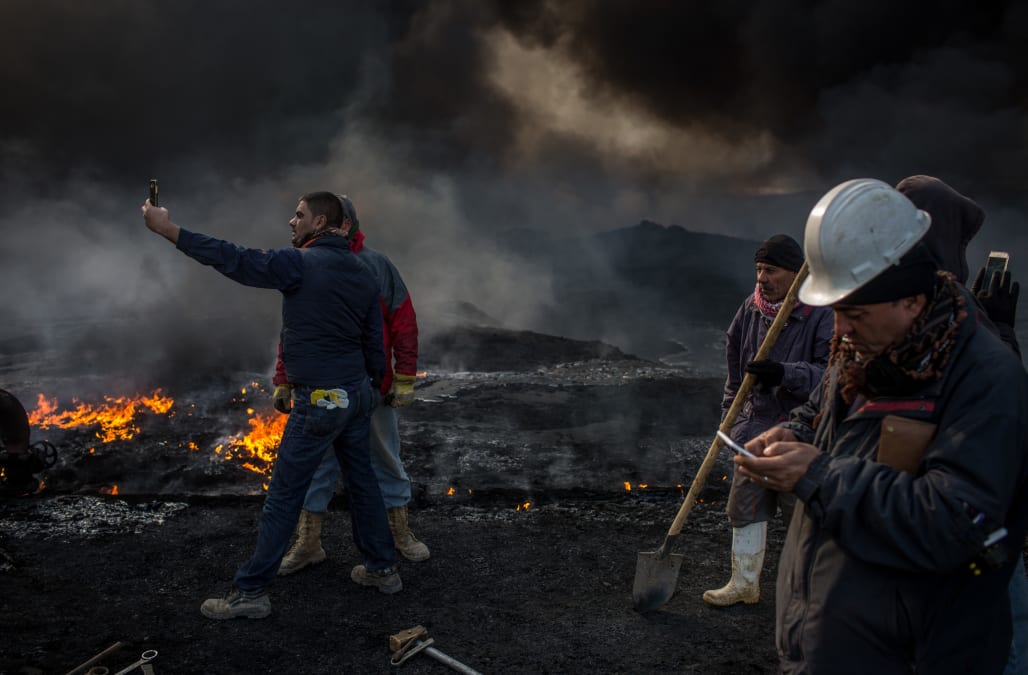 In 2016, people went to extreme measures for the perfect selfie. Whether it was an oil fire in Iraq, a protest in France, or on a ledge atop a Hong Kong skyscraper, dare-devils had plenty of opportunities to take self-portraits from the edge.

Take a look at other strange selfies from the past 12 months:

9 PHOTOS
Some of 2016's most questionable selfies
See Gallery

Some of 2016's most questionable selfies
2016 Rio Olympics - Swimming - Lituania's Olympic Team Training - Olympic Aquatics Stadium - Rio De Janeiro, Brazil - 30/07/2016. Lituania's Danas Rapsys takes a selfie in a practices. REUTERS/Edgard Garrido FOR EDITORIAL USE ONLY. NOT FOR SALE FOR MARKETING OR ADVERTISING CAMPAIGNS.
A man takes a selfie in front of placard with a picture of Melania Trump in her hometown Sevnica, Slovenia, December 1, 2016. Banner reads "Welcome in hometown of first lady of U.S.".REUTERS/Srdjan Zivulovic
Shi'ite fighters take a selfie while firing artillery towards Islamic State militants near Falluja, Iraq, May 29, 2016. REUTERS/Alaa Al-Marjani TPX IMAGES OF THE DAY
A tourist takes a selfie next to the carcass of a dead whale on a beach along the Arabian Sea in Mumbai, India, January 29, 2016. REUTERS/Danish Siddiqui
Football Soccer - Romania v Poland - World Cup 2018 Qualifiers - National Arena Stadium, Bucharest, Romania - 11/11/16. A Polish fans snaps a selfie with a Romanian gendarme at the end of the match. Inquam Photos/Octav Ganea/via REUTERS ATTENTION EDITORS - THIS IMAGE WAS PROVIDED BY A THIRD PARTY. EDITORIAL USE ONLY. ROMANIA OUT. NO COMMERCIAL OR EDITORIAL SALES IN ROMANIA.
Iraqi soldiers take a selfie during a fighting with Islamic State fighters near the front line in the Shahrazad district of eastern Mosul, Iraq November 4, 2016. REUTERS/Zohra Bensemra
Palm Springs resident Benito Almojuela takes a selfie near a thermometer sign which reads 125 degrees in Palm Springs, California, U.S. June 20, 2016. REUTERS/Sam Mircovich TPX IMAGES OF THE DAY
Movistar team rider Nairo Quintana (C) of Colombia takes a selfie during a training session in Sopo, near Bogota, Colombia, before the 103rd Tour de France cycling race, June 10, 2016. REUTERS/John Vizcaino
A couple takes a selfie on the glass sightseeing platform on Shilin Gorge in Beijing, China, May 27, 2016. Picture taken with a fisheye lens. REUTERS/Kim Kyung-Hoon
Up Next

The post 2016: The Year In Extreme Selfies appeared first on Vocativ.

More from AOL.com:
The best celebrity autobiographies of 2016
The 35 most bizarre photos of 2016
Amazon says 2016 holiday season 'best-ever'