These 2 presidents ignited the 4 most protested Inauguration Days 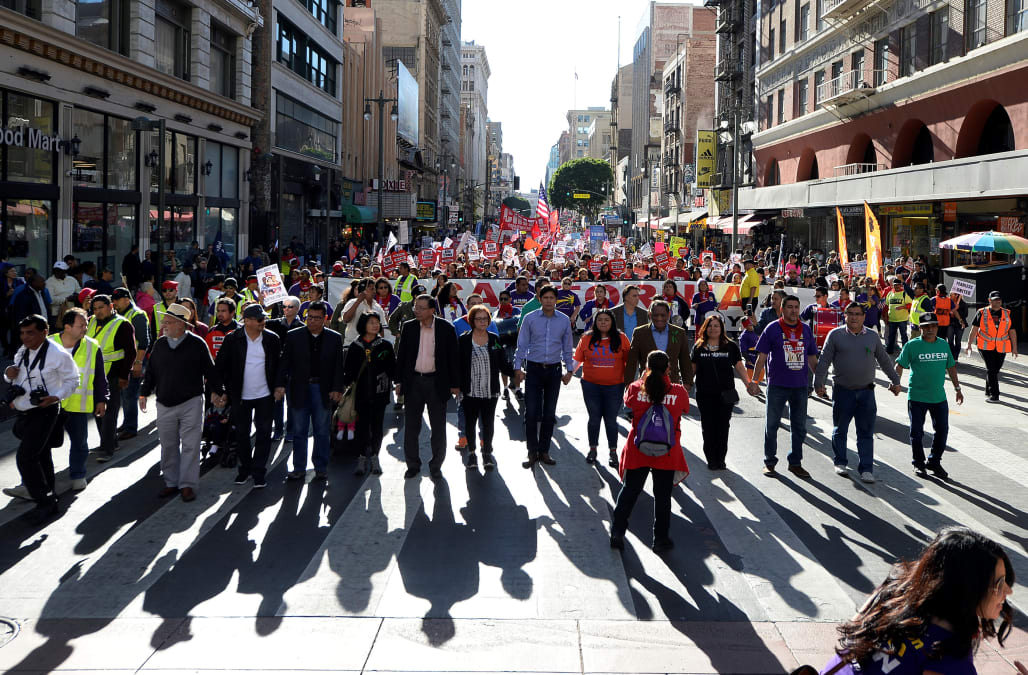 Donald Trump promised a peaceful transition. On Inauguration Day, some protestors have a mind to disturb that peace.

Tens of thousands of people are pledging to show up to protest on Jan. 20, either with anti-war groups and grassroots organizations, or just on their own as rogue agitators. Over a dozen groups have requested permits, and local organizers are coordinating communal sleeping spaces in churches to accommodate hecklers and dissidents from across the country.

This doesn't happen every four years. In fact, Donald Trump will begin his presidential legacy by joining a pair of presidents mired by controversy and scorned by history.

"There've really only been two presidents who stand out from all of the others in terms of the vastness of the protests against them, either against them personally or against the wars that were taking place during their administrations," Jim Bendat, an inauguration expert and author of Democracy's Big Day: The Inauguration of Our President, said.

These two presidents, it turns out, were protest magnets: Both served two terms — and both drew noteworthy protests for each of their inaugurations. So two presidents are responsible for the four most notable Inauguration Day protests.

Have you figured out who they are yet?

Richard Nixon ran as a Republican in 1968 with a supposed "secret plan" to end the Vietnam War, which American public opinion had slowly soured on during the course of several presidential administrations. Nixon's campaign had the support of Washington's war hawks of the time, and anti-war protestors heckled him along the campaign trail.

Things came to a head on Inauguration Day, when Nixon took over the White House from Lyndon Johnson. There were days of protests leading up to Jan. 20, 1969, organized mostly by a group called MOBE — the National Mobilization Committee to End the War in Vietnam. The heads of MOBE didn't want the confrontations to get physical, but it ended up being a messy few days.

There were marches in the mud, clashes with neo-Nazis and even fistfights among demonstrators who had differences about how the protests should go down.

On Inauguration Day itself, rocks, bottles and improvised smoke bombs were thrown at Nixon's motorcade as Secret Service agents battled to intercept flying objects. Flags burned, police were attacked and dozens were arrested.

Nixon, still having failed to secure an end to the war amid growing public opposition, ran for and won a second term in 1972. But the American people were not about to let him off the hook; Nixon's second inauguration saw a second round of protests. Anti-war demonstrators threw more rocks at the motorcade and threw up "sieg heil" salutes to mock Nixon.

Things didn't turn out well for Nixon, but not because of Vietnam. He resigned instead of facing impeachment as part of the Watergate scandal, where journalists revealed that his administration had harassed political opponents, broken into the Democratic National Committee headquarters and bugged the place.

As for that secret plan? Turns out, Nixon was secretly sabotaging peace talks, an act that President Lyndon Johnson later called "treason."

Then there was the other president who drew massive Inauguration Day protests: George W. Bush.

Unlike Nixon, the protests against Bush's first inauguration weren't based on opposition to a war. Instead, throngs of demonstrators gathered in Washington to protest against the fact that Bush was taking over the White House at all.

Like Donald Trump, Bush didn't win the popular vote. At first the race was too close to call, then Democratic nominee Al Gore conceded — but then retracted his concession at 3 a.m. on the night of the election. Legal wrangling over recount efforts quickly went to the Supreme Court, which eventually reached a decision ending those efforts and giving Bush the presidency — a decision with a one-vote margin.

"Gore: 500,000 — Bush: 1," signs at the protests read, making accusations that the Supreme Court stole the election for the Republicans.

Inauguration Day 2005 found the U.S. in the throes of the Iraq War. The U.S. had invaded Iraq in the spring of 2003, with American ground troops deployed to the Middle East to disarm what turned out to be Saddam Hussein's non-existent weapons of mass destruction arsenal. Two years into the war, Bush was facing an expanding insurgency in Iraq — and a rising tide of opposition to the war at home.

More than 10,000 demonstrators are estimated to have come out to protest Bush's second inauguration. The ANSWER Coalition — an anti-war group that plans on bringing tens of thousands to Trump's inauguration — protested in the along the parade route, and the DC Anti-War Network hosted a mass rally at Meridian Hill Park. Some protestors, who had split off from the permitted marches, were even beaten and pepper sprayed by cops.

Bush's presidency ended only marginally better than Nixon's, in that Bush finished his second term. Otherwise, Bush is largely blamed for embroiling the U.S. in foreign conflicts that still occupy our military today, and also for leaving the economy in tatters.

So, Nixon and Bush: Two presidents who gave us the four most contentious Inauguration Days in modern American history. If Trump draws the sorts of massive protests many are expecting in Washington, he'll be following in some troubled footsteps.

More from Mic.com:
Here are the protests planned for Inauguration Day — permitted or not
Inauguration Day 2017: Protest, latest updates and everything else you need to know
These Trump inauguration cartoons perfectly capture this year's political absurdities