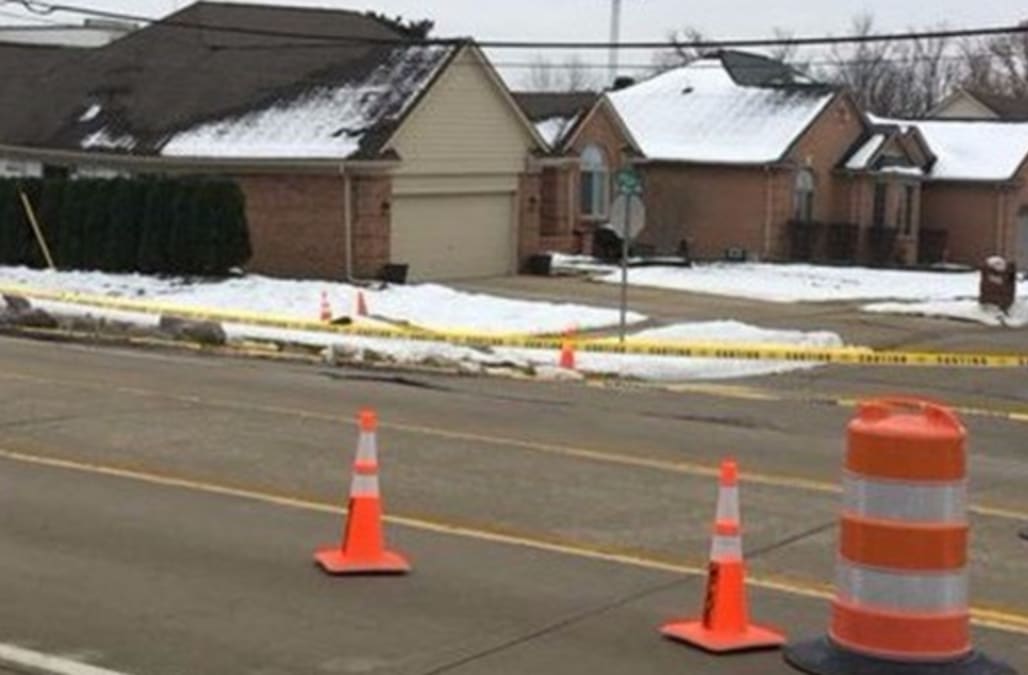 A massive sinkhole in Michigan is threatening homes and forcing officials to pump sewage into a nearby river as they race to prevent the sludge from filling residents' basements.

The 250-foot-long, 100-foot-wide sinkhole erupted in Fraser, Michigan, a suburb of Detroit, on Christmas Eve morning. Authorities believe it formed after an 11-foot-wide sewer pipe burst 55 feet below ground.

Fraser Mayor Joe Nichols declared a state of emergency on Saturday and ordered 22 homes, all on one street, to be evacuated. There have been no deaths or injuries, but three homes have been deemed uninhabitable because of damage from the sinkhole.

"One is halfway down [the sinkhole] and the other two are leaning that direction," Bob Cannon, supervisor of neighboring Clinton Township, told NBC News.

Power and gas have been shut off in the area as engineers redirect sewage into the Clinton River after rainfall threatened to send it cascading into basements. The river isn't connected to any sources of drinking water for the area, and will "correct itself over a number of months" and filter out the sewage, Cannon said.

"It's a bad choice, but a better choice than having it go into our basements," he said.

The hole is still growing and authorities say the ground won't be safe enough for residents to return for at least two weeks. Gas and water have been shut off as engineers work to steady the sinkhole and start filling it back in.

This isn't the first time a sinkhole has struck the area: The same road caved in in 2004. That collapse took more than $50 million and 10 months to fix, according to The Detroit News.

"My heart goes out to you," Nichols, the mayor, told residents at a packed City Hall meeting on Monday, The Detroit News reported. "I know that people here are very upset and understandably so. We are upset for you. We are looking for answers. If we stay strong, we will get through this ... and we will get home."

The sinkhole runs along 15 Mile Road, which divides the two communities of Fraser and Clinton Township. It's expected to shut down 15 Mile for several months — a problem for an area that's home to more than 100,000 people.

Engineers with civil engineering firm Anderson, Eckstein and Westrick are working to secure the area. The firm did not return a call from NBC News on Tuesday but told The Detroit Free Press it was considering building a temporary roadway while 15 Mile is compromised.