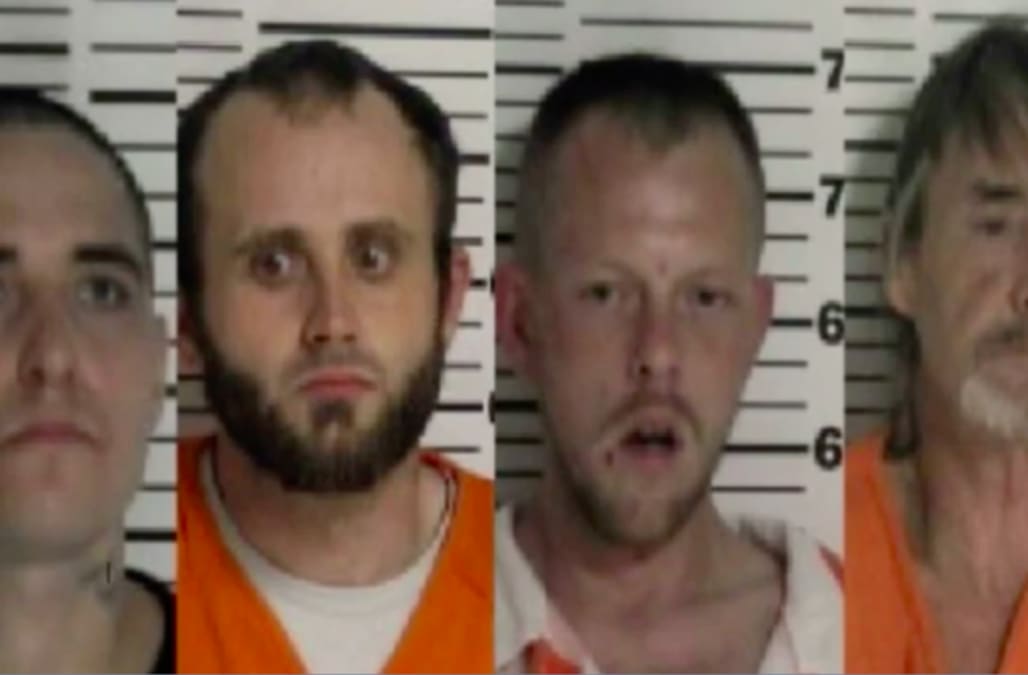 A Christmas Day jailbreak saw six men escape a Tennessee jail through a hole behind a damaged toilet and four of those men remain on the run as of Monday morning.

Authorities said the escape was made possible by some leaking and rusty pipes behind a steel toilet in the Cocke County Jail Annex.

More from Inside Edition: Woman Escapes Cops Twice Before Being Tased In Bizarre Police Chase

Around 1:30 a.m., the six inmates removed the toilet and then climbed through the hole left in the wall, authorities said.

Prison inmates Richard Matt, 48, (L) and David Sweat, 35, are seen in a combination of enhanced pictures released by the New York State police June 17, 2015, showing how they might look after escaping 12 days ago. After more than 1,200 tips from the public, authorities on Wednesday expanded a manhunt for two killers whose brazen escape from the maximum-security Clinton Correctional Facility in Dannemora, New York, on June 6.

Lionel Clah, right, and Joseph Cruz escaped while being transported to a New Mexico prison.

Mug shots of three prisoners that made a rare escape from Alcatraz Island. From left to right: Clarence Anglin, John William Anglin, and Frank Lee.

John Dillinger, desperado, Public Enemy No. 1, as he looked while being taken from Tucson, Arizona to Crown Point, Indiana, where he later escaped.

Convicted Chardon High School gunman TJ Lane was one of three inamtes who escaped the Allen Oakwood Correctional Institution in Ohio in 2014. He was quickly captured.

"Apparently the bolts holding the unit rusted out and there was prior damage to the concrete due to plumbing repairs," the sheriff told WVLT. "The inmates vandalized the lavatory removing it from the wall and gained access to a hole which led outside of the facility."

Two of the inmates, John Mark Speir and Steven Edward Lewis, were captured separately hours after the escape.

Speir was captured Sunday "at a residence in the Cosby community," according to police. Lewis was captured after a foot chase by officers in Cocke County.

More from Inside Edition: Couple Leads Cops on Wild Chase With 4-Year-Old Girls in the Back Seat: Cops

Two men have been charged with harboring a fugitive in connection with Speir's capture.

Watch: The Terrifying Moment a Driver Uses a Crowbar on a Window During a Case of Road Rage