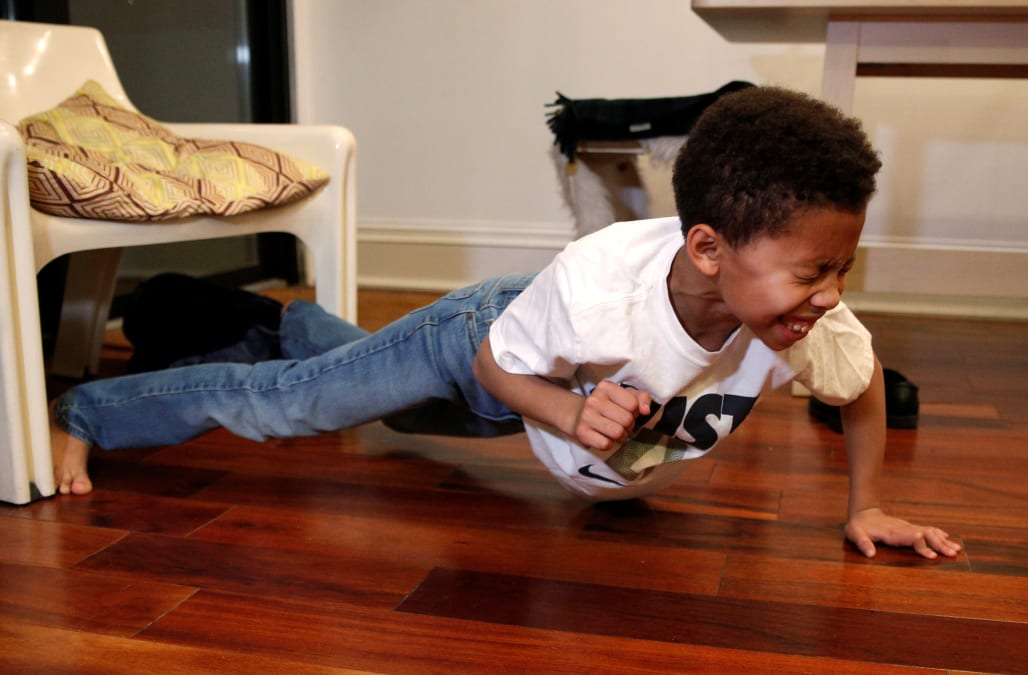 NEW YORK (Reuters) - Jodie Patterson's 3-year-old, Penelope, was brooding and angry until one day she asked her child what was wrong.

Penelope, who was assigned female at birth, was upset "because everyone thinks I'm a girl," but he said he was really a boy.

"I said, 'However you feel inside is fine.'" Patterson recalled from their home in Brooklyn, New York. "And then Penelope looked at me and said, 'No mama, I don't feel like a boy. I am a boy.'"

Penelope Patterson does a one-handed push up at his home in Brooklyn, New York, U.S. December 13, 2016.

Penelope Patterson plays a game on his phone at his home in Brooklyn, New York, U.S. December 13, 2016.

Penelope and his mother Jodie Patterson give an interview at their home in Brooklyn, New York, U.S. December 13, 2016.

Penelope Patterson plays with his brother Cassius at their home in Brooklyn, New York, U.S. December 13, 2016.

Jodie Patterson speaks with Penelope during an interview at their home in Brooklyn, New York, U.S. December 13, 2016. \

Jodie Patterson (L) and Penelope give an interview at their home in Brooklyn, New York, U.S. December 13, 2016

Penelope Patterson jokes with his brother at their home in Brooklyn, New York, U.S. December 13, 2016.

Almost immediately, Patterson embraced the reality that Penelope was a transgender boy, and by age 5 he was going to school as a boy. Today, at age 9, Penelope is happy and healthy as a boy who loves karate and super heroes and decided to keep his birth name.

Increasingly across the United States, doctors and parents of transgender children are embracing their identity as soon it starts becoming obvious, sometimes around age 3. Many say they are finding much greater chances of happiness and well-being when children are nurtured in their new gender identity at such a young age.

Although there is not a consensus on the issue, some clinicians who work with transgender children have concluded that when children persistently identify as the nonconforming gender, the best course is to socially transition, or live as the other gender, even at age 3.

"No mama, I don't feel like a boy. I am a boy." Penelope Patterson

Other specialists in the field advocate a more cautious approach because the long-term psychosexual results for young children can vary widely and unpredictably.

Whatever the age, parental support is crucial.

Fifteen percent of transgender Americans say they ran away from home or were kicked out of the house, according to a survey released on Dec. 8 of nearly 28,000 transgender adults.

But transgender people with supportive families were far less likely to attempt suicide, be homeless or experience serious psychological distress - by nearly 20-point margins compared with those who lacked family support, the survey said.

With better education, today's transgender children generally receive much more support than those surveyed adults did in their youth.

The question remains, though, around embracing gender nonconformity: How young is too young?

Researchers have long established that children acquire gender identity starting around 3 years old, and for the vast majority who are not transgender, or cisgender, such an identity is unremarkable.

While transgender people may realize their identities at any age, some firmly establish a transgender identity in early childhood, even by age 3.

Some of the pioneering research on transgender issues has come from psychiatrists at VU University Medical Center in the Netherlands, sometimes called "the Dutch group."

Advocating "watchful waiting," the Dutch group urges caution in leading pre-adolescent children into a social transition, in part because a significant though not precisely established percentage will revert back to the natal gender, or gender assigned at birth. Experts say further study is needed to determine how many children make such a reversion in their transgender identity.

The Dutch group sees potential harm in putting a teenager through a second gender transition. They also raise concerns that transition at a young age can distort a child's sense of reality, requiring later treatment.

But some Americans psychiatrists who work directly with transgender youth have argued that those who are consistent in their gender identity be allowed to transition because they are suffering in the natal gender.

"I support a social transition for a kid who is in distress and needs to live in a different way. And I do so because I am very focused on what the child needs at that time," said Johanna Olson-Kennedy, medical director of the Center for Transyouth Health and Development at Children's Hospital Los Angeles, the largest transgender youth clinic in the United States with some 750 patients.

A social transition to the other gender helps children learn, make friends, and participate in family activities. Some will decide later they are not transgender, but Olson-Kennedy says the potential harm in such cases may be overstated.

Because prepubescent transgender children require no more physical change than a new hairstyle and clothes, the initial transition is completely reversible, Olson-Kennedy said.

Of some 1,000 patients she has dealt with, only one switched back to the natal gender, and without any harm, she said.

David Breland, who works with transgender adolescents as director of the Gender Clinic at Seattle Children's Hospital, offers simple advice for parents: "Listen to the child."

"They tell us who they are. We don't force anything on them," Breland said. "By affirming who they are, there's definitely better evidence that they do well mentally and physically. So, how could that be wrong?"

One long-term study under way by the University of Washington's TransYouth Project is attempting to establish the stability rates of transgender identity among youth and the correlation between family acceptance and well-being.

Led by psychology professor Kristina Olson, the study aims to follow 350 transgender kids for 20 years, starting from the ages of 3 to 12.

Moreover, observation of a group of 5- to 12-year-olds who were allowed to transition found that they tended to be clear about their gender identity and maintained it as deeply held. A third look at 9- to 14-year-olds concluded that "We found remarkably good mental health outcomes in socially transitioned children." The long-term study continues, but Olson's team has published these initial findings in research papers.

DeShanna Neal, a mother of four from Delaware, can attest to the benefits of embracing her young child's transgender identity.

Her child Trinity, now 13, was determined to be a boy at birth but began identifying as female by age 3. By 4, Trinity was living as a girl at home, but when she started school she went dressed as a boy.

Still, she identified as a girl at school, troubling her teachers and leading to stress for Trinity. A school psychologist determined she suffered from depression.

Neal found a therapist who told her and her husband to fully embrace Trinity's female identity. She said that the therapist also gave strikingly blunt advice.

"She said, 'Your daughter already knows who she is. Now you have to decide. Do you want a happy little girl or a dead little boy?'"

They went straight from the therapist to the store to buy Trinity a dress and pink pajamas, and they noticed an immediate change. Their depressed child became happy.

"She saw her dress and she put it on immediately. And she would not take it off," Neal said. "We never swayed in our love and support for her."