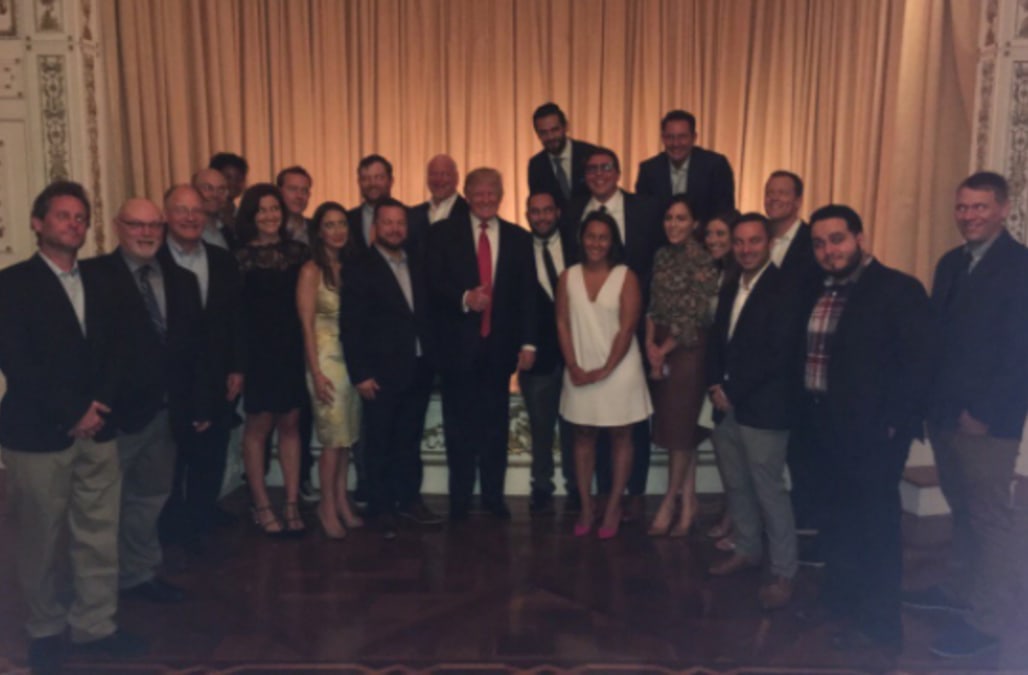 An off-the-record gathering between President-elect Donald Trump and members of the media earned criticism and sparked debate over whether journalists were pushing Trump enough to make himself available on-the-record.

On Sunday, some high-profile reporters and 2016 presidential campaign embeds schmoozed with Trump and members of his transition team at Trump's Mar-a-Lago resort in Florida, drinking and posing for individual and group pictures with the president-elect, who attended for a half-an-hour.

The online backlash to the meeting was swift after Mike Allen, former Politico reporter and founder of Axios, posted a photo from the party:

Though it is hardly uncommon for the president or their staff to meet with reporters off-the-record, many observers took issue with journalists attending the meeting despite Trump's refusal to hold a traditional press conference.

Reactions to Trump's off-the-record cocktail party with reporters
@xeni @tdopp @MichaelLinhorst @mikeallen when journalists kowtow the most powerful it shows how little they care to hear from powerless
@mikeallen lol in all seriousness though this is terribly embarrassing for you & everyone in this photo should be ashamed. happy holidays!
The 2017 cast of The Authoritarian Apprentice https://t.co/asA7AgiTB5
Reminder that some people are journalists because they worship power in any form and need to be adjacent to it https://t.co/NhF1l5R4EQ
Reporters shouldn't pal around off-the-record with Trump until he agrees to have a public, on-the-record news confe… https://t.co/21d79mvd9f
Trump hasn't had a press conference in 143 days. But he's now had a private press confab. https://t.co/ju05fC3dkw
for those keeping score at home: it's been 143 days since trump's last press conference. https://t.co/NvkggjjnSa
And who don't answer questions on the record. https://t.co/6GQrTUutMx
Obama did OTRs, too. Problem is if Trump isn't also answering questions on the record. And he hasn't held a press c… https://t.co/pjbE1VxpqA
Up Next

Despite criticizing Hillary Clinton the campaign trail for refusing to speak to reporters, Trump himself has not held a press conference in 144 days, breaking the custom for presidents-elect to hold press conferences several days after the election.

The New York Times' Maggie Haberman did not criticize the meeting, but pointed out that a similar off-the-record dinner in 2015 hosted by Hillary Clinton's campaign chair John Podesta drew the ire of a number of Trump supporters and Trump-friendly media outlets.

Others lamented Trump's frequent demonization of the press, noting how he often uses the traveling press pool as a punchline or a target at rallies.

More from Business Insider:
Kanye West just unexpectedly arrived at Trump Tower for a meeting with Trump
Trevor Noah: Donald Trump is finally telling the truth about his 'lying'
GLASS HALF FULL: Trump signals approval of DNC hack for the information it revealed