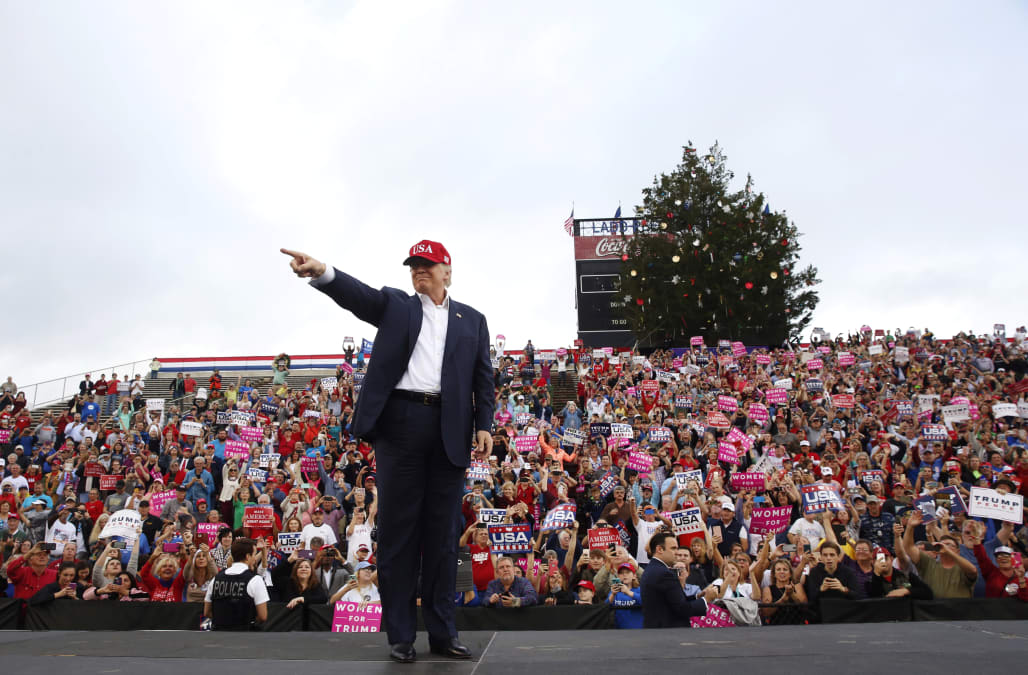 President-elect Donald Trump wrapped up the last of his rowdy victory rallies in Mobile, Alabama, on Saturday, thanking his supporters and launching into lengthy rundowns of his Election Day successes.

Trump ran through a list of the states he had won, boasting about his improbable victory, criticizing the polls and pundits who had cast doubt on his chances, and repeating his usual criticisms of the "very dishonest" media that covered his campaign.

At one point, Trump noted that there were multiple points throughout his campaign when he "should've given up."

Trump also praised the Electoral College system, which handed him a decisive victory over his Democratic opponent Hillary Clinton, despite her substantial lead in the nationwide popular vote.

Trump spent the latter part of his speech repeating some of his campaign promises on defeating ISIS, funding infrastructure, renegotiating trade deals, and creating jobs.

"My administration will follow two very simple rules: Buy American and hire American," he said to raucous cheers from the crowd.

Trump also addressed some of the negative response to his victory, bringing up recent comments made by first lady Michelle Obama about the aftermath of the election. In an interview that aired on CBS on Friday, Obama told Oprah Winfrey that "we're feeling what not having hope feels like."

The crowd at Trump's rally booed when he mentioned the first lady's name and referred to her comments, but Trump said he believed Obama had meant the statement "in a different way than it came out."

"I assume she was talking about the past, not the future, because I'm telling you, we have tremendous hope," he said.

"This is truly an exciting time to be alive. The script is not yet written. We don't know what the page will read tomorrow," he added.

The rally was expected to be Trump's last public event before heading to his Mar-a-Lago estate in Palm Beach, Florida, for the holiday season.

More from Business Insider:
Kanye West just unexpectedly arrived at Trump Tower for a meeting with Trump
This is what's it's really like at Trump Tower — which is disrupting life in NYC
Trudeau on Trump and globalization: 'There is an alignment there on our concerns'