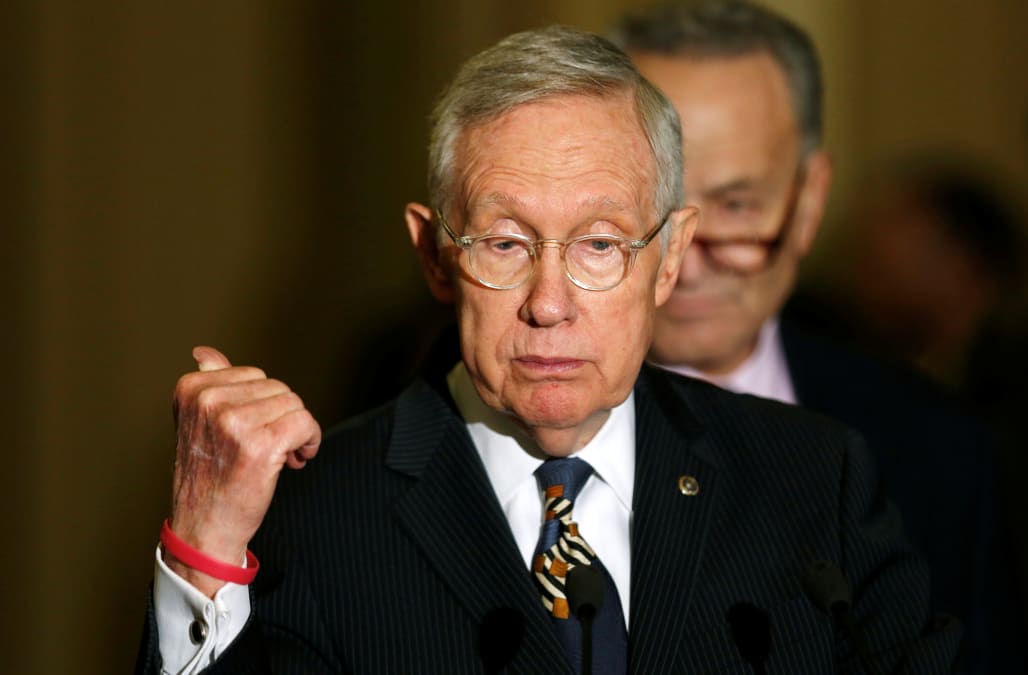 Comey had released a letter to congressional leaders less than two weeks ahead of the election announcing that authorities had discovered additional emails related to the investigation into her use of a private server. The agency then announced days before the election that the additional emails would not alter its initial decision to not bring forth charges against the former secretary of state.

"Had he not written that letter a week or so before the election, she would've won," Reid said. "We would've picked up at least two more Senate seats."

Harry Reid
Senate Democratic Leader Harry Reid (D-NV) speaks on the third day of the Democratic National Convention in Philadelphia, Pennsylvania, U.S. July 27, 2016. REUTERS/Mike Segar
Senate Minority Leader Harry Reid, a Democrat from Nevada, stands next his official portrait during a ceremony on Capitol Hill in Washington, D.C., U.S., on Thursday, Dec. 8, 2016. Reid, the tart-tongued ex-boxer known for pugilistic rhetoric about Republicans, is marking the end of his 34-year career in Congress with the unveiling of his official portrait that was painted by former Senate staffer Gavin Glakas. Photographer: Andrew Harrer/Bloomberg via Getty Images

Senate Minority Leader Harry Reid, a Democrat from Nevada, speaks during a news conference in Las Vegas, Nevada, U.S., on Saturday, Feb. 20, 2016. Hillary Clinton pulled out a victory over Bernie Sanders in Nevadas Democratic caucuses that will help right her campaign as both candidates head into a 10-day blitz of crucial contests starting next Saturday in South Carolina.

The Nevada Democrat also criticized Comey for not taking a stronger stance against reported Russian meddling in the US election, of which the Washington Post and New York Times reported Friday that an assessment by the CIA concluded that Russia interfered in the election to help Trump's presidential bid.

"They ignored it," said Reid, who wrote a letter to Comey regarding Russian intervention ahead of the election. "The FBI director didn't have the decency, the courtesy, to even respond to my letter."

He said the response he got from a lower-level official "said they were looking into it," but "they looked into nothing."

Calling Comey a "partisan," Reid doubled-down on his assertion that Comey "ignored" intelligence that pointed toward Russia's involvement in the hacking of emails from members of the Democratic National Committee and Clinton's campaign from WikiLeaks.

RELATED: Presidents in their younger days:

"It was obvious," Reid said. "There is information out there, he had it ... and he ignored it."

The effort from WikiLeaks was "all directed to hurt Clinton" and "they certainly didn't leak any information" regarding Republican organizations and campaigns.

Asked about his past intense criticism of Trump, Reid said he stood by all of his prior statements, asking "what's wrong" with any of them. But, he said, Trump "doesn't appear to be as bad as I thought he would be.

"Well, he said he's going to try and help the Dreamers, he has shut up about the fence, he appears to be somebody who's trying to not be as crazy as his election," he said, adding, "He's still bad, but not as bad as I thought he would be."