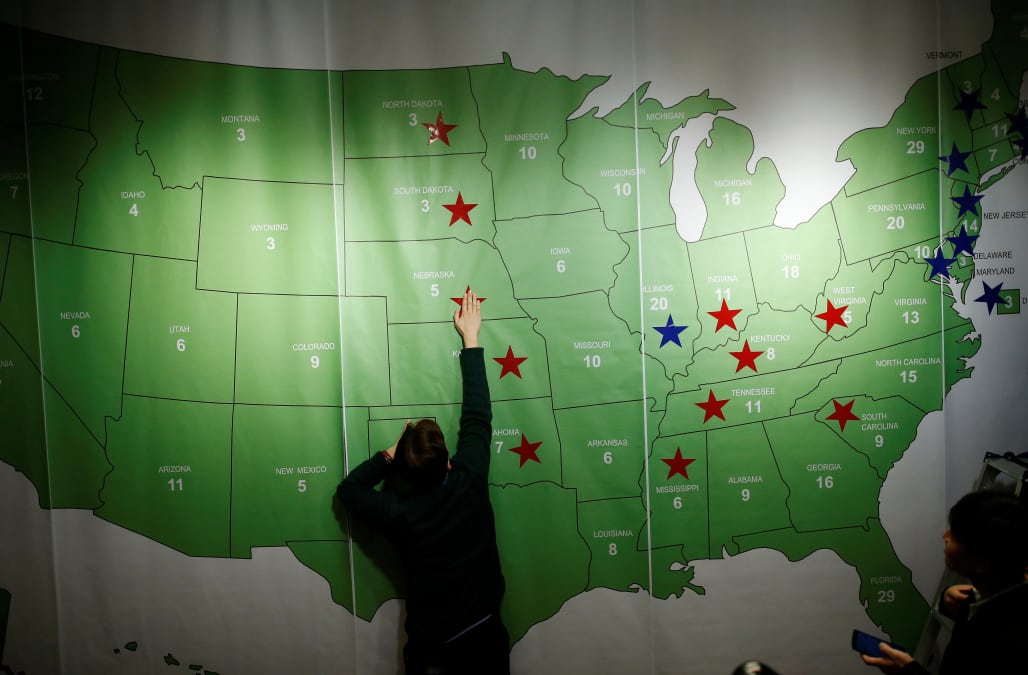 Hillary Clinton's campaign has thrown its support behind an effort to provide members of the Electoral College with intelligence briefings on Russian breaches of U.S. political organizations before the College formally votes to elect Donald Trump president next week.

"The bipartisan electors' letter raises very grave issues involving our national security. Electors have a solemn responsibility under the Constitution and we support their efforts to have their questions addressed," Clinton campaign chairman John Podesta said Monday, responding to a request for briefings by a group of electors.

Podesta's strongly worded statement signals a clear shift in strategy from Clinton and her team, who have until now shown no interest in questioning the legitimacy of last month's election. And it could crack the door to further challenges or give succor to some Democrats' long-shot hope that Trump's election could be upended when the Electoral College convenes December 19.

A large trove of Podesta's emails were released by WikiLeaks late in the campaign, and intelligence officials believe the emails were provided to the organization by the Russians.

More on this story

Trump defeated Clinton in the general election by an electoral vote margin of 306-232. Since then, Clinton has pulled ahead of Trump by a popular vote margin of nearly 3 million.

"We now know that the CIA has determined Russia's interference in our elections was for the purpose of electing Donald Trump. This should distress every American. Never before in the history of our Republic have we seen such an effort to undermine the bedrock of our democracy. This is not a partisan issue and we are glad to see bipartisan support in the Congress for an investigation into Russia's role," Podesta said in his statement.

Trump and his campaign have vehemently denied any Russian intervention on their behalf, accusing the intelligence agencies he will soon head of being politicized and misinformed. Some allies, including John Bolton, a potential senior Trump State Department nominee, have even accused the Obama Administration without evidence of hacking the Democratic National Committee and Podesta's personal Gmail account in a "false flag" operation.

Earlier Monday, a group of 10 Electors, including some well known Democrats and one Republican, sent an open letter to James Clapper, the Director of National Intelligence, requesting briefings on alleged Russian meddling in the election.

"The Electors require to know from the intelligence community whether there are ongoing investigations into ties between Donald Trump, his campaign or associates, and Russian government interference in the election," their letter reads. "We further require a briefing on all investigative findings, as these matters directly impact the core factors in our deliberations of whether Mr. Trump is fit to serve as President of the United States."

The signatories include Christine Pelosi, a California Democratic strategist and daughter of House Minority Leader Nancy Pelosi, New Hampshire Representative-elect Carol Shea Porter, Washington, D.C. Councilwoman Anita Bonds, along with other respected Democrats, all of whom are members of the Electoral College.

The Democratic signatories were joined by Republican Chris Suprun of Texas, who wrote an op-ed explaining why he won't cast his Electoral College vote for Trump.

The 538 members of the Electoral College will meet next Monday in each state capital to cast the votes to will formally elect Trump president. They are bound to vote for the popular vote winner in their states, but some so-called "Faithless Electors" have vowed to refuse to cast a ballot for Trump.

Technically, this is the only vote that matters, so some Democrat and Republican critics have prayed that a last-minute intervention by the Electors could prevent Trump from becoming president. Their dreams are highly unlikely to become reality for a host of legal and political reasons, not least because Trump has a fairly wide 74-vote margin.

Clinton's campaign and most other prominent Democrats have declined to give credence to efforts to reverse the results either through a recount or Electoral College vote, refusing to undermine faith in an electoral system they defended against Trump's attacks throughout the campaign. Without the support of the defeated candidate and — until recently — party leader, the other efforts foundered, though they had little hope of succeeding anyway.

But the remnants of Clinton's team has been closely watching these efforts from the sidelines, and even received briefings from a team of computer scientists about alleged voter machine hacking. Now, Podesta signaled the campaign may move off the bench.

"Each day that month, our campaign decried the interference of Russia in our campaign and its evident goal of hurting our campaign to aid Donald Trump. Despite our protestations, this matter did not receive the attention it deserved by the media in the campaign," Podesta said. "Never before in the history of our Republic have we seen such an effort to undermine the bedrock of our democracy."