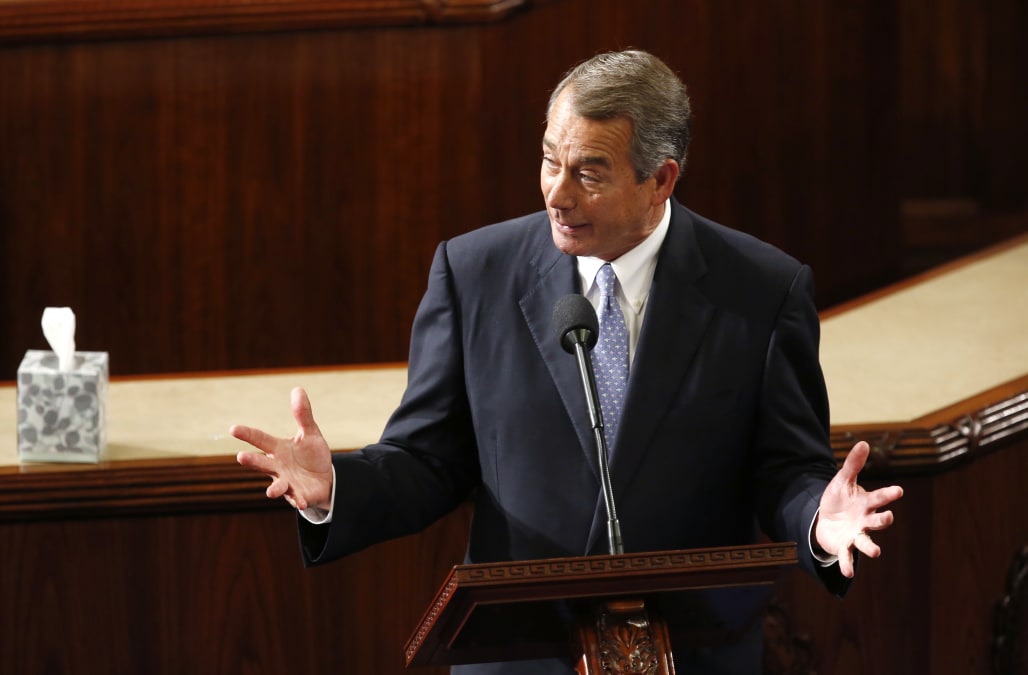 Former Speaker of the House John Boehner has made it known how much he misses working in government. (Hint: He doesn't.)

Since he was forced out by members of his own party in the House, Boehner has been watching from the sidelines and seems to be enjoying it.

"Every day I'd watch it and was like, 'Thank God I'm not in the middle of this,'" Boehner said.

RELATED: John Boehner throughout the years
​​​​

John Boehner during his time as speaker
WASHINGTON, DC - SEPTEMBER 24: Speaker of the House John Boehner (R-OH) (R) speaks with Pope Francis (L) in the U.S. Capitol building before the Pontiff speaks to a joint meeting of Congress September 24, 2015 in Washington, DC. Pope Francis will be the first Pope to ever address a joint meeting of Congress. The Pope is on a six-day trip to the U.S., with stops in Washington, New York City and Philadelphia. (Photo By Bill Clark-PoolGetty Images)
WASHINGTON, DC - MARCH 19: Speaker of the House John Boehner (R-OH) arrives for his weekly press conference at the U.S. Capitol on March 19, 2015 in Washington, DC. Boehner answered questions on the Republican budget, Hillary Clinton's emails, and other topics during the press conference. (Photo by Win McNamee/Getty Images)
Up Next

Boehner also talked about his expectations for the new president, who he likened to President Theodore Roosevelt: "Donald Trump isn't there to kind of trim around the edges and occupy the White House."

Boehner's cold shoulder to his old career makes a lot of sense. His attempts at compromise turned the House Freedom Caucus, the most conservative members, against him, making it impossible for him to actually do his job presiding over the House. He ended up resigning in October last year.

But despite his experience, Boehner is telling president-elect Donald Trump that reaching across the aisle still matters. He believes Trump should garner as much bipartisan support he can as the incoming president works to implement an agenda.

"One of the things I learned growing up on my dad's barb was to disagree without being disagreeable," Boehner said.

But Trump may not need that advice if things work out the way the GOP hopes. Both the president-elect and his party have been pushing the idea of a unified GOP, and controlling both chambers of Congress and the White House makes that a whole lot easier.

More from Newsy:
White House In Favor Of Women Registering For Draft
The US Birth Rate Is Dropping, But Other Countries Have It Much Worse
A Homeland Security Council Rejected Advice To Keep For-Profit Prisons