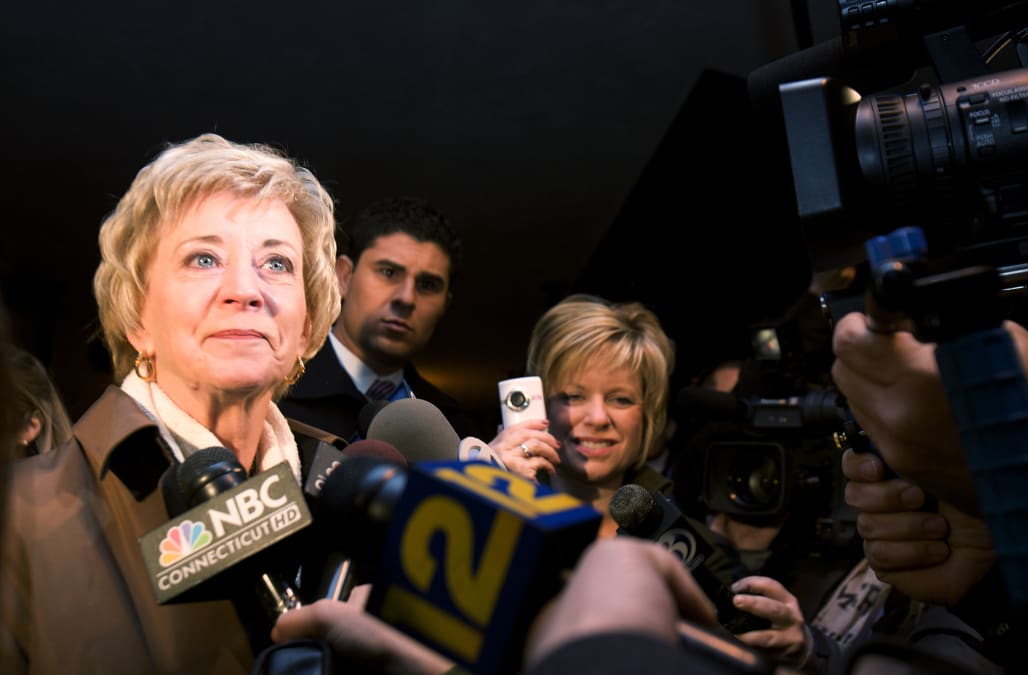 McMahon previously served as CEO of the World Wrestling Entertainment, which is based in Stamford, Connecticut.

Linda McMahon through the years

Linda McMahon, President and CEO of the World Wrestling Federation poses for a portrait with the federation posters in the background,December 12,1999 in Connecticut.

WWE CEO Linda McMahon attends a Smack Down your vote! news conference February 2, 2003 in Washington, DC. The group released a National Voter Issues paper which asks questions every candidate should answer to win 20 million 18 to 30-year-old votes in 2004.

World Wrestling Entertainment (WWE) professional wrestler Trish Stratus speaks on a panel as WWE CEO Linda McMahon listens during the 'Professor For A Day' event at Nassau Community College March 3, 2003 in Garden City, New York. Stratus acted as an assistant professor to McMahon, who lectured a group of sports marketing majors on the marketing and promotional strategies that have made the WWE a long-term success.

Linda Mcmahon, Stephanie Mcmahon and Triple H at the premiere of 'Blade Trinity' after party held at the Level 7 club Hollywood and Highland on December 7, 2004 in Hollywood, California.

Vince McMahon with his wife Linda infront of the St. Regents hotel on September 30, 2006 in New York City.

WWE Chairman Vince McMahon and his wife Linda McMahon attend a ceremony honoring him with a star on the Hollywood Walk of Fame at Hollywood and Highland on March 14, 2008 in Hollywood, California.

Former CEO of World Wrestling Entertainment Linda McMahon looks over at Attorney General Richard Blumenthal as he answers a question during their debate for the U.S. Senate on October 4, 2010 at the Belding Stage at the Bushnell in Hartford, Connecticut. Blumenthal and McMahon faced off in their first debate Monday, discussing topics from Health care to Bush-era tax cuts.

Republican candidate in the 2010 race for U.S. Senator from Connecticut Linda McMahon, former World Wrestling Entertainment CEO, meets with Rachel Kilcullen and her son Sean outside a polling location in Stamford, Connecticut August 10, 2010.

U.S. Senate Republican candidate Linda McMahon of Connecticut arrives to vote in Greenwich, Connecticut, November 2, 2010. Popular Democratic state attorney general Richard Blumenthal has opened a comfortable lead after facing an unexpectedly tough race against big-spending former World Wresting Entertainment chief executive McMahon. McMahon pumped millions out of her own pocket into the race, but Democrats have hammered her role in the sordid world of professional wrestling.

Linda McMahon addresses supporters, surrounded by family and friends, after conceding to Richard Blumenthal in the race for the U.S. Senate seat being vacated by Chris Dodd, at the Connecticut Convention Center in Hartford, Connecticut, on Tuesday, November 2, 2010.

Linda McMahon, former chief executive officer of World Wrestling Entertainment Inc., left, and actor Gary Sinise, founder of Gary Sinise Foundation, attend the 16th annual âSalute to Service: Statesmanship Awards Dinner' at the Ritz-Carlton in Washington, D.C., U.S., on Tuesday, March 19, 2013. Sinise is one of the honorees of the event, organized by the U.S. Association of Former Members of Congress.

Robert Irvine and Linda McMahon attend the grand opening of the USO Warrior and Family Center on April 1, 2014 in Bethesda, Maryland.

Linda McMahon, former chief executive officer of World Wrestling Entertainment Inc., smiles while speaking to the media in the lobby of Trump Tower in New York, U.S., on Wednesday, Nov. 30, 2016. Trump said Wednesday he plans to leave his business 'in total' to focus on the White House and will discuss the matter at a news conference Dec. 15 in New York with his children, some of whom are business associates.

In a statement from his transition team, Trump said he tapped McMahon because she "has a tremendous background and is widely recognized as one of the country's top female executives advising businesses around the globe. She helped grow WWE from a modest 13-person operation to a publicly traded global enterprise with more than 800 employees in offices worldwide."

In the statement from the transition team, McMahon is quoted as saying, "Our small businesses are the largest source of job creation in our country. I am honored to join the incredibly impressive economic team that President-elect Trump has assembled to ensure that we promote our country's small businesses and help them grow and thrive."

Reaction to Linda McMahon's appointment to Small Business Administration
Congratulations Mom, I am so proud of you! President-Elect @realDonaldTrump made an excellent choice for the head o… https://t.co/IBmW64VKcy
Congrats @Linda_McMahon on your nomination. I’m very proud and know you’ll do an excellent job. #SBA
Congrats to @Linda_McMahon on being chosen to lead the #SBA! I know she'll provide the same insight and dedication that helped build @WWE.
Thank you, @MCS4Biz -- I look forward to following in your footsteps in support of our nation's small businesses at… https://t.co/2gIZduCLL4
@Linda_McMahon congratulations on your nomination. Small business just got a huge shot in the arm as did our country
Linda McMahon's first act as head of the Small Business Administration: Rename it the Cruiserweight Business Administration. #WWE
Linda McMahon of WWE named by @realDonaldTrump to head SBA. Great choice. Let Senate "wrestle" with THAT confirmation!
Great choice by @realDonaldTrump by picking @Linda_McMahon to help small business. https://t.co/uqiB0Yjqso
Great selection by @realDonaldTrump as LEM was a great boss for over 20+ years to me. @WWE https://t.co/b6zGvTB1lE
Up Next

McMahon ran for Senate in Connecticut twice, but lost to both current Connecticut U.S. senators, Richard Blumenthal and Chris Murphy. She now advises global businesses with APCO Worldwide's International Advisory Council. She is also a co-founder and CEO of Women's Leadership LIVE LLC., a company that utilities live events and memberships to inspire women to launch their own businesses.

"Linda is going to be a phenomenal leader and champion for small businesses and unleash America's entrepreneurial spirit all across the country," Trump said in the release of his pick.

Trump has been a major supporter — and participant — in World Wrestling Entertainment since the late 1980s, when the company held matches at Trump Plaza in Atlantic City.

With reporting by CNN.