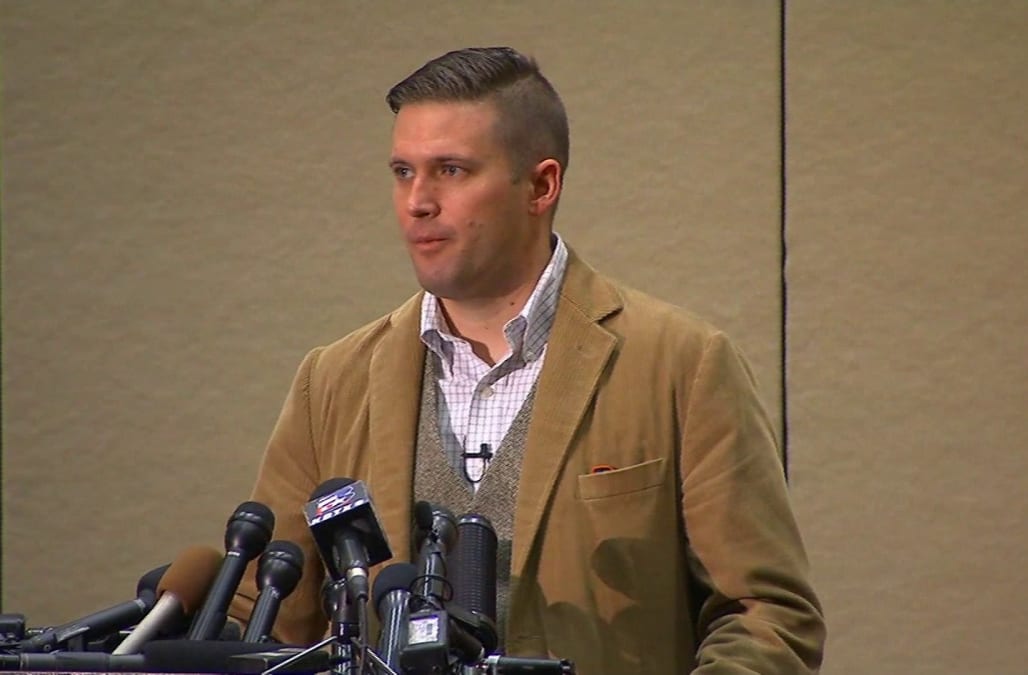 COLLEGE STATION, Texas (KIAH) — "We won. And we got to define what America means," controversial speaker Richard Spencer said in a speech on campus at Texas A&M. "America, at the end of the day, belongs to white men."

Spencer is known as a radical leader of the Alt-right movement and a white supremacist.

"I am here, first and foremost, to talk to students," Spencer said. "I am very curious about what life is like for them in 2016."

The university did not want the Spencer event to happen on campus, but because A&M is a public university they could not ban Spencer's visit.

The university stated that Spencer's views are "in direct conflict with our core values."

Activists from across the Lone Star State joined forces with Aggie students to protest the controversial white nationalist on campus.

"I'm here today to protest the presence of Richard Spencer and the Alt-right movement on our campus," Caitlyn Miles said. "I'm here to demonstrate that the Bryan-College Station and Texas A&M community is a united community through our differences-- and that we respect people of different socio-economic backgrounds, cultural backgrounds, religious backgrounds...people of different races and ethnicities-- and that we will not tolerate messages of hate."

"Today is about taking a stand against white supremacy and calling the Alt-eight out for what it really is: returning neo-Nazis and white supremacists who hate people of other races and other faiths," protester Jane Thrardi said.

There were multiple protest areas on campus including a silent protest in a courtyard and even a graduate student protest.

One protest is called 'Beat The Hell Out of Hate.'

While the protesters pledge to keep their outrage peaceful, they all stand united against the Alt-right.

RELATED: See how children are affected by political protests:

Children caught up in race relations, political protests
Eight year-old Angelo Estes Jr. calls for the arrest of Officer Betty Shelby, who shot dead unarmed motorist Terence Crutcher, with other protesters outside the Tulsa Police headquarters in Tulsa, Oklahoma, U.S. September 20, 2016. REUTERS/Nick Oxford TPX IMAGES OF THE DAY
Nyla Joseph, 9, a daughter of a U.S. military veteran demonstrates with veterans outside U.S. Republican presidential candidate Donald Trump's news conference outside Trump Tower in New York, U.S., May 31, 2016. REUTERS/Shannon Stapleton
Malakai McCoy, age 3 years, gets a touch-up from his mother Maybelline McCoy as he and his sister Amayah McCoy hold a sign next to their baby stroller during the 'Our Generation, Our Choice' protest in downtown Washington November 9, 2015. The Monday march to highlight race, climate, and immigration issues was timed to mark exactly one year until the 2016 U.S. presidential election, according to protesters. REUTERS/Jonathan Ernst
UNITED STATES - JULY 25: A boy bikes with a march made up of mostly Sen. Bernie Sanders, I-Vt., on Broad St., en route to the security perimeter of the Wells Fargo Center in Philadelphia, Pa., on the first day of the Democratic National Convention, July 25, 2016. The march ended near FDR Park and featured demonstrators supporting a variety of issues. (Photo By Tom Williams/CQ Roll Call)
MANHATTAN, NEW YORK CITY, NEW YORK, UNITED STATES - 2015/11/22: Kids with Tamir Rice signs. Stop Mass Incarcerations Network sponsored a children's march demanding accountability on the one year anniversary of Tamir Rice's death at the hands of the Cleveland police. (Photo by Andy Katz/Pacific Press/LightRocket via Getty Images)
BROOKLYN, NEW YORK CITY, NEW YORK, UNITED STATES - 2016/01/18: Trio of young protesters with hand-lettered sign. Hundreds of Brooklyn residents gathered in Bay Ridge at the site of an alleged bias attack for a march entitled 'Muslims Our Neighbors' in support of Bay Ridge's Islamic community. (Photo by Andy Katz/Pacific Press/LightRocket via Getty Images)
BROOKLYN, NEW YORK CITY, NEW YORK, UNITED STATES - 2016/02/20: Asian girls with hand-lettered signs in support of Peter Liang. Dozens of activists associated with Black Lives Matter demonstrated in opposition to a massive rally staged by the coalition against Asian discrimination in support of convicted NYPD officer Peter Liang. (Photo by Andy Katz/Pacific Press/LightRocket via Getty Images)
MANHATTAN, NEW YORK, NY, UNITED STATES - 2016/01/15: A child among the demonstrators waives an Oromian flag. Several hundred Ethiopian-American demonstrators from around the U.S. gathered opposite United Nations Headquarters in New York City to express their anger over the recent deaths of over 140 protesters in Ethiopia at the hands of government security forces sent to contain the protests over the Addis Abba 'master plan.'. (Photo by Albin Lohr-Jones/Pacific Press/LightRocket via Getty Images)
STATEN ISLAND, NEW YORK, NY, UNITED STATES - 2016/07/17: Eric Garner's infant daughter Legacy Garner holds a sign bearing the name of Officer Panataleo. On the second anniversary of the death of Eric Garner during his attempted arrest by NYPD officer Daniel Pantaleo, Black Lives Matter coalition members and supporters gathered at the site of his death on Bay Street and then marched on to the 120th Precinct of the NYPD intermittently practicing civil disobedience as NYPD Community Affairs officers attempted to regulate the march, in Tompkinsville, Staten Island. (Photo by Albin Lohr-Jones/Pacific Press/LightRocket via Getty Images)
BROOKLYN, NEW YORK CITY, UNITED STATES - 2016/02/25: Little protester with elephant sign. Animal care activists gathered in front of Barclay's Center to protest on the opening night of Ringling Brothers' circus against the circus use and treatment of animals in the show. (Photo by Andy Katz/Pacific Press/LightRocket via Getty Images)
DAG HAMMARSKJOLD PLAZA, NEW YORK, NY, UNITED STATES - 2016/05/01: Members of the metro-area Syrian-American community rally for the ouster of Bashar Al-Assad. An ad hoc collective of Syrian-Americans and supporters from New York and New Jersey held a rally in Dag Hammarskjold Skjold Plaza near United Nations Headquarters in solidarity with similar protests worldwide on May Day to draw attention to as-yet failed attempt to impose a ceasefire in Syria and demand the immediate ouster of the Syrian Arabic Republic's President Bashar Al-Assad. (Photo by Albin Lohr-Jones/Pacific Press/LightRocket via Getty Images)
Up Next