Imagine that call: Al Gore and Hillary Clinton commiserated over the election 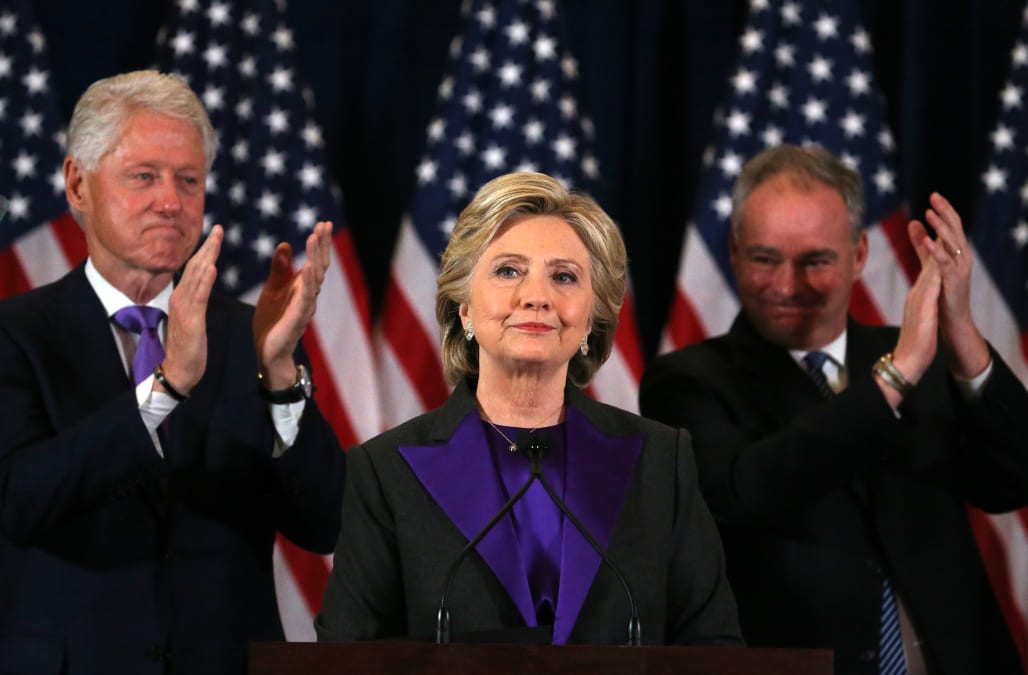 Imagine being a fly on this wall: Former vice president Al Gore commiserated with Hillary Clinton about her unexpected presidential election loss, he told Mashable in a recent interview.

On the election, if there is anyone who can empathize with Clinton's predicament, it's Gore—the only other living person who earned more popular votes while also losing the Electoral College, and therefore, the presidency, when he ran in 2000 against George W. Bush.

"I spoke to her in general terms after the election, just because of our relationship, and just commiserated with her," Gore told Mashable in an interview on Sunday. The former vice-president, a vocal proponent of Clinton during the 2016 election, also campaigned for her in Florida, Colorado and other key states over the last year.

"But I'm not sure she needs advice from me on how to deal with it," Gore continued. "She'll be fine."

Here's @algore on his Trump Tower meeting, per the pool: pic.twitter.com/b9ix49tccX

Gore also, to the surprise of many, met with Donald and Ivanka Trump today at Trump Tower. The meeting is part of a wait-and-see approach that he is taking with the incoming administration on the climate issue, despite the president-elect's long record of making statements on climate change that show he denies the reality of human-caused global warming.

It's unclear if Gore can convince the incoming Trump administration to abandon its "default position," as incoming chief of staff Reince Preibus recently put it, that global warming is largely "bunk." Trump has said the U.S. should pull out of the Paris Climate Agreement and focus more on developing domestic fossil fuels.

Gore's optimism stands in contrast to the approach of many environmental groups, since activists are preparing for armageddon when it comes to fights over oil, gas and coal development as well as efforts to rollback the Obama administration's climate regulations.

For example, Mary Boeve, the executive director of the environmental group 350.org, released a statement in the wake of the Dakota Access Pipeline decision announced on Sunday evening that said in part:

When asked about his attitude as the inauguration approaches, Gore said he's holding out hope that climate change will be one of the many issues that Donald Trump changes his mind on.

"Well I think all of us involved in the effort to solve the climate crisis have felt to some degree of angst if not shock over some of the statements that were made during the campaign about climate," he said.

"The evidence on the climate crisis is so overwhelming that I have to believe there still is some chance that he will take a fresh look at some of the positions he articulated during the campaign," Gore said.

"Maybe I'm wrong, but I'm gonna wait and see whether I'm wrong or not."

Gore said the president-elect is going through a period of adjusting to the reality of assuming office, which he and Bill Clinton went through in 1992.

"I think that any new incoming president has to go through a period of reconciling campaign positions with the reality that he or she finds after the election when new information is available and when the campaign pressures have subsided," he said.

In his interview with Mashable, Gore discussed the pernicious effects of fake news in the 2016 election, emphasizing that this isn't an entirely new phenomena, but that it seems to have reached a new level.

"The fake news meme provides a fresh lens through which to look at this phenomena and it is of course a very serious problem, it is not new, and historians remind us that even in the age of America's founders there was fake news," Gore said.

"And perhaps it's always been a weapon in the arsenal of some ambitious politicians and others seeking to influence public policy, but it does seem to be out of control when you have fake news getting more attention on the Internet during the closing weeks of the campaign that news from the New York Times, Washington Post and Wall Street Journal."

"That is kind of a wakeup call that tells us we need to do more to police the accuracy and integrity of the democratic discourse."

Fake news has even permeated the federal government. Last week, for example, the House Science Committee's Republican majority staff tweeted a link to a false Breitbart story purporting to show evidence that the world is cooling overall, earning a swift rebuke from environmentalists, climate scientists, Democratic politicians and others.

Gore says he thinks that tools will be developed to combat fake news online, perhaps by social networks, the news media or others. Facebook CEO Mark Zuckerberg, for example, has tasked his company with figuring out ways to minimize the spread of fake news stories in the platform's newsfeed.

"I, for one, am confident that over time the internet discourse has a self-healing quality that may eventually yield tools for minimizing the damage done by fake news, and the kinds of things that the House Science Committee majority puts out," Gore said. "But it is a serious problem."

He said that young people, ages 30 and younger, may be more resistant to fake news, as seen in the fact that they overwhelmingly voted for Clinton.

"If you look at the vote totals among Americans 30 and under, the generation that is digitally native, the outcome of the election was overwhelmingly in the other direction," he said.

"It may be a mistake to read too much into that statistic, but I do think that the more digitally savvy people are, the less vulnerable they're likely to be to the kinds of abuses that we saw in [the form of] fake news during this last election," Gore said.

"Many people assume that because young people are fluent in social media, they are equally perceptive about what they find there," Stanford education professor Sam Wineburg, the lead author of the study, said in a statement. "Our work shows the opposite to be true."

Gore's name has long been synonymous with the issue of climate change, and on Monday and Tuesday he is holding a "24 Hours of Reality" event to showcase climate science and solutions.

The event, which is being streamed online and broadcast on television in more than 75 countries, features appearances by celebrities including Gisele Bundchen and Julia Louis-Dreyfus, as well as musicians like Jon Bon Jovi and PJ Harvey.

This year's 24 Hours of Reality marathon kicks off at 6 p.m. ET, and can be seen at this website.

This year, each hour of the broadcast will showcase the circumstances of the climate crisis in one of the 24 largest emitting countries, including the U.S., China, Brazil and India. The event will focus on moving the Paris Climate Agreement, which went into effect last month and is the first global agreement in which all countries of the world have committed to reducing global warming pollution, toward more ambitious implementation.

The event will be shown on DirectTV, Facebook Live, Telemundo, FOXTEL and more.

The inaugural 24 Hours marathon, featuring Gore delivering a relentless barrage of slideshows interspersed with celebrity appearances and musical performances, was in 2011. Since then, the Climate Reality Project has fine-tuned the marathons to provide a unique balance between hard science and entertainment.

This year's event will even feature an original performance by Cirque de Soleil.

"We've got some terrific performances along with the climate content," Gore said, plugging the appearance by several of "the hottest K-Pop" acts from South Korea.

RELATED: Presidents in their younger days: