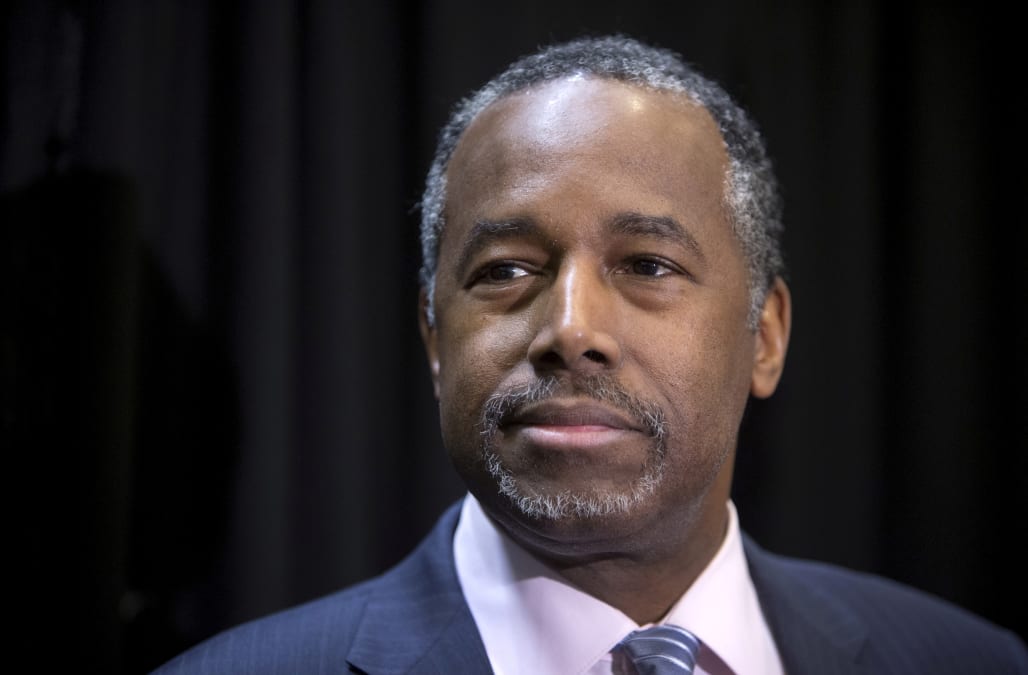 YOUR MAMA'S NOTES: Celebrated neurosurgeon turned unlikely, always sleepy seeming politico Ben Carson has his ornately turned out mock-Mediterranean mini-mansion in an upscale guard-gated golf community in West Palm Beach available on the open market with an asking price of $1,200,000. The former republican presidential hopeful, who was just this week nominated by president-elect Donald Trump to be the next secretary of the Department of Housing and Urban Development despite not having a shred of experience in urban planning, is looking to turn a healthy profit on the property he purchased note quite three years ago for $775,000. It seems that most of Mister Carson's personal belongings have been removed from the house — the much snickered about portrait of the good doctor with Jesus Christ standing behind him is nowhere to be seen — and online marketing materials show the two-story residence has five bedrooms and 4.5 bathrooms in 6,155 square feet of exceptionally high-ceiled and mostly beige ersatz opulence.

A columned double-height portico marks the main entrance to the house through double glass doors set into a towering wall of glass. The stone-floored foyer, which features faux-stone trompe l'oeil walls and a double-height rotunda ceiling, steps down to a formal living room with a couple of arched and lighted display niches, a 22-foot-high coffered with hand-painted insets, and an impressively tall picture window with remote-controlled window treatments that, let's be honest, might just as well be at home in a Nevada bordello or Victorian funeral parlor. The adjoining formal dining space also has a meant-to-impress double-height ceiling as does the adjacent kitchen, an irregularly shaped space that looks to have been fairly recently renovated with custom cabinets, granite counter tops and high-end stainless steel appliances. The kitchen opens to a breakfast area grandly set into a double-height circular bay lined with windows as well as to an also double-height family room with column-accented built-ins and two walls of floor-to-ceiling windows hung with matronly floral-print draperies tied back with over-sized tassels.

Etched glass doors just off the living room open to a small office/library wrapped in painted paneling and the nearby main floor master suite features a bizarrely long, mirror-backed built-in console that incorporates a bar sink and angles around to a not-quite properly octagonal sitting room with floor-to-ceiling windows and glass doors that lead to the pool. A mirrored dressing hall flanked by a pair of custom-fitted walk-in closets leads to a spacious bathroom with twin vanities and a jetted circular bathtub placed in front of an etched glass window. Just off the kitchen area a discrete bedroom wing has two en suite bedrooms along with a laundry room and garage access and upstairs two more guest/family bedrooms share a ceramic-tiled Jack 'n' Jill-style bathroom wallpapered in a blue and green palm leaf pattern. Also upstairs is a small den with built-in media center that incorporates multiple televisions and a gigantic window that looks not to the outdoors but, rather bizarrely, down in to the family room below.

The palm tree-dotted front yard is large enough to accommodate a semi-circular drive that arches up to a three-car garage but the backyard is a fairly compact space that manages to squeeze in a small built-in grilling station, a free-form swimming pool and spa, and a double-height loggia with a view over a series of carefully clipped hedges to the verdant greens of the golf course to which the property backs up.

Doctor Carson and his wife, Candy, have already purchased their next home, a nearly 9,000-square-foot similarly ersatz mock-Med mansion in Palm Beach Gardens that they picked up for $4.375 million, and they continue to own a 47.75-acre spread in rural Upperco, MD, about 25 miles northwest of The Johns Hopkins Hospital in Baltimore where until his 2013 retirement Dr. Carson was the esteemed head of pediatric surgery, that was acquired, per property records, in September 2001 for $1.5 million.