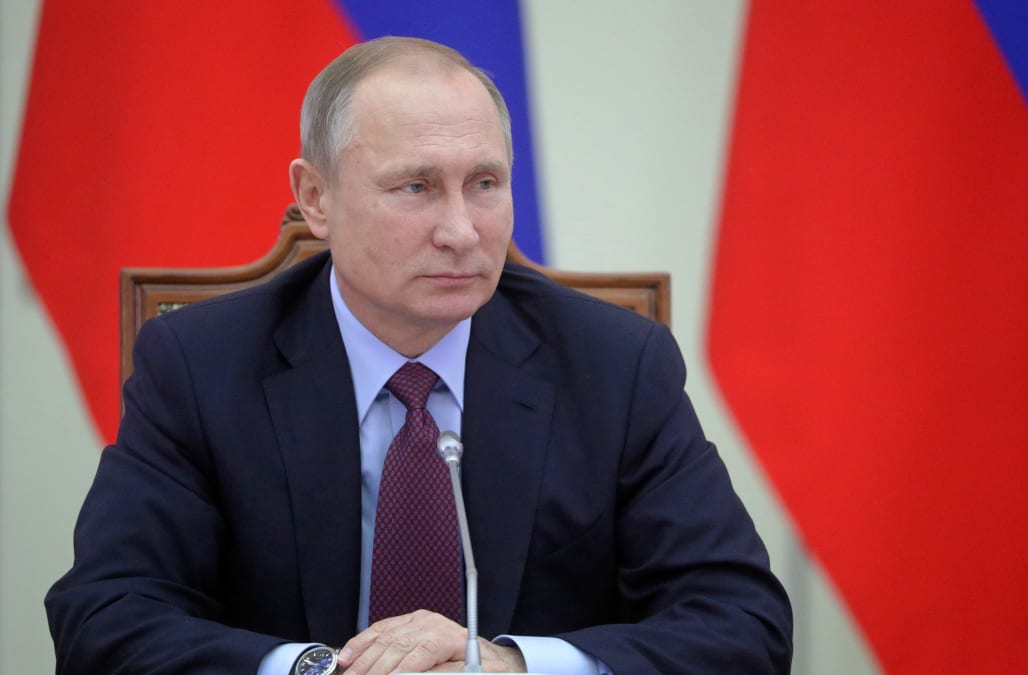 "Let's not kid anybody," said Panetta, who also served as CIA director and White House chief of staff. "Putin's main interest is to try to restore the old Soviet Union. I mean that's what drives him."

Panetta added of the current security environment, "This is a dangerous moment."

Panetta's comments Thursday, at the Center for Strategic and International Studies in Washington, D.C., are an escalation of what he has said publicly previously, arguing that the Russian president wants restoration of the former Soviet arrangement.

Obama and Putin's awkward meetings through the years
BEIJING, CHINA - NOVEMBER 10: U.S. President Barack Obama (L) and Russian President Vladimir Putin (R) attend a family photo ceremony during the APEC Leaders meeting November 10, 2014 in Beijing, China. The APEC Summit hosted 1500 economic leaders in Beijing to deliberate key issues facing the Asia-Pacific economy. (Photo by Sasha Mordovets/Getty Images)
SAINT PETERSBURG - SEPTEMBER 05: U.S. President Barack Obama (R) greets Russian President Vladimir Putin at the G20 summit on September 5, 2013 in St. Petersburg, Russia. The G20 summit is expected to be dominated by the issue of military action in Syria while issues surrounding the global economy, including tax avoidance by multinationals, will also be discussed during the two-day summit. (Photo by Sasha Mordovets/Getty Images)
Russias President Vladimir Putin (L) walks past US President Barack Obama as he arrives to pose for the family photo during the G20 summit on September 6, 2013 in Saint Petersburg. World leaders at the G20 summit on Friday failed to bridge their bitter divisions over US plans for military action against the Syrian regime, with Washington signalling that it has given up on securing Russia's support at the UN on the crisis. AFP PHOTO / JEWEL SAMAD (Photo credit should read JEWEL SAMAD/AFP/Getty Images)
ENNISKILLEN, NORTHERN IRELAND - JUNE 18: Leaders (L-R) Russia's President Vladimir Putin, Britain's Prime Minister David Cameron, US President Barack Obama stand for the 'family' group photograph at the G8 venue of Lough Erne on June 18, 2013 in Enniskillen, Northern Ireland. The two day G8 summit, hosted by UK Prime Minister David Cameron, is being held in Northern Ireland for the first time. Leaders from the G8 nations have gathered to discuss numerous topics with the situation in Syria expected to dominate the talks. (Photo by Matt Cardy/Getty Images)
Up Next

Panetta, a Democrat, served as a U.S. Representative from California before serving in both the Clinton and Obama administrations.

He also condemned Russia's 2014 annexation of Crimea, during the forum.

"The United States has to make very clear we're not going to stand for that kind of new aggression to invade independent countries. Those are countries are that ought to be able to determine their own future," Panetta said.

According to Russian officials, the vast majority of those living in Crimea backed union with Russia in a referendum vote in 2014. Some have criticized traditional U.S. policy as contradictory with its democratic values, for that reason.

Panetta's comments also come after a long political campaign season, in which President-elect Donald Trumpsuggested the U.S. accept Russia's annexation of Crimea, and argued the U.S. should work with Russia, if possible.

Rep. Mac Thornberry, R-Texas, chairman of the House Armed Services Committee, echoed Panetta's remarks, arguing for an increase in defense spending and noting that there are "some particular areas of weaponry Russia is making investments in" that should be of concern to the United States.

More from US News:
How Donald Trump Could Normalize Relations With Russia and Vladimir Putin
Why There's a Globalization Backlash
Leon Panetta: Not ‘That Worried’ About Donald Trump Tapping Too Many Generals