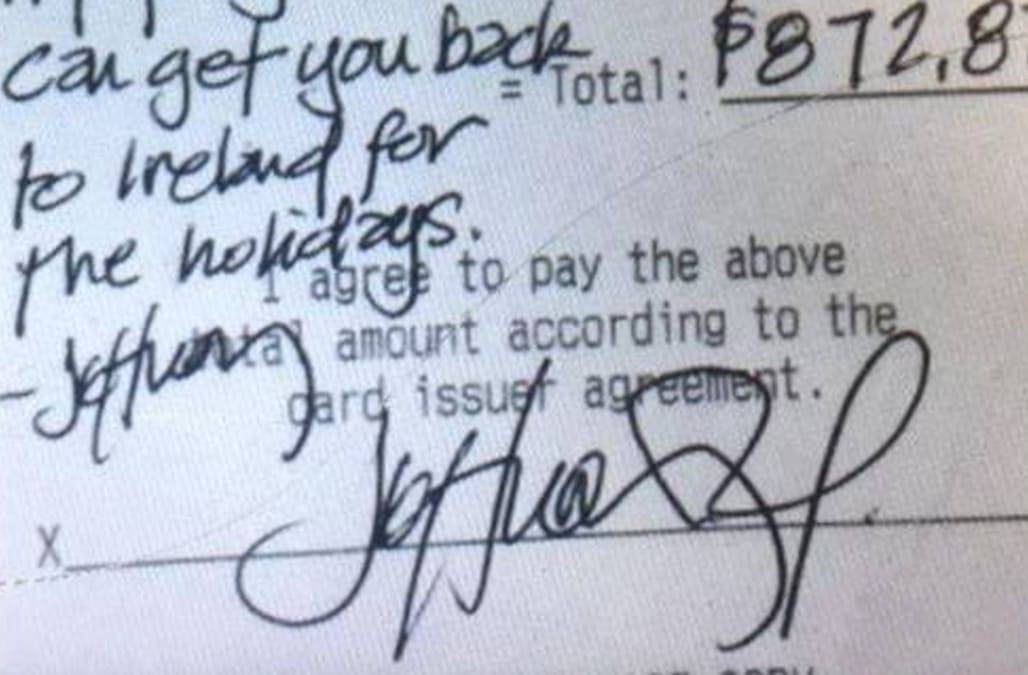 One diner in Texas is getting into the holiday spirit early, and left hundreds of dollars as a tip so his waiter can be with his family.

25-year-old Ben Millar is from Ireland, but is now working in Houston. He is expecting his son, Killian, with his girlfriend Taryn Keith in January.

According to Keith, who spoke to Irish news site Independent.ie, said that Millar struck up a conversation with the diner about U2. The customer said he had just went to Ireland to see the band; Millar said offhandedly that he wish he could go to see his family.

RELATED: These notes are sure to make you laugh

Once the diner, only known as Jeffrey, left, Millar realized he helped make his dream a reality. Jeffrey had tipped him $750 and wrote on the receipt, "Hopefully this can get you back to Ireland for the holidays." Keith shared the receipt on Facebook:

Unfortunately, Jeffrey left before Millar can thank him; both Millar and Keith hope that he sees the now-viral Facebook post and knows how much they appreciate the gesture.

Keith said that the couple plan on going to Ireland with their baby as soon as possible. She told Independent.ie, "The due date is January 20 so we will be heading to Ireland as soon as my son is old enough to fly."

She said that Jeffrey's act of kindness has made her and Millar more positive. "This just made his whole year," she said. "It's good to know that there are kind people in the world."