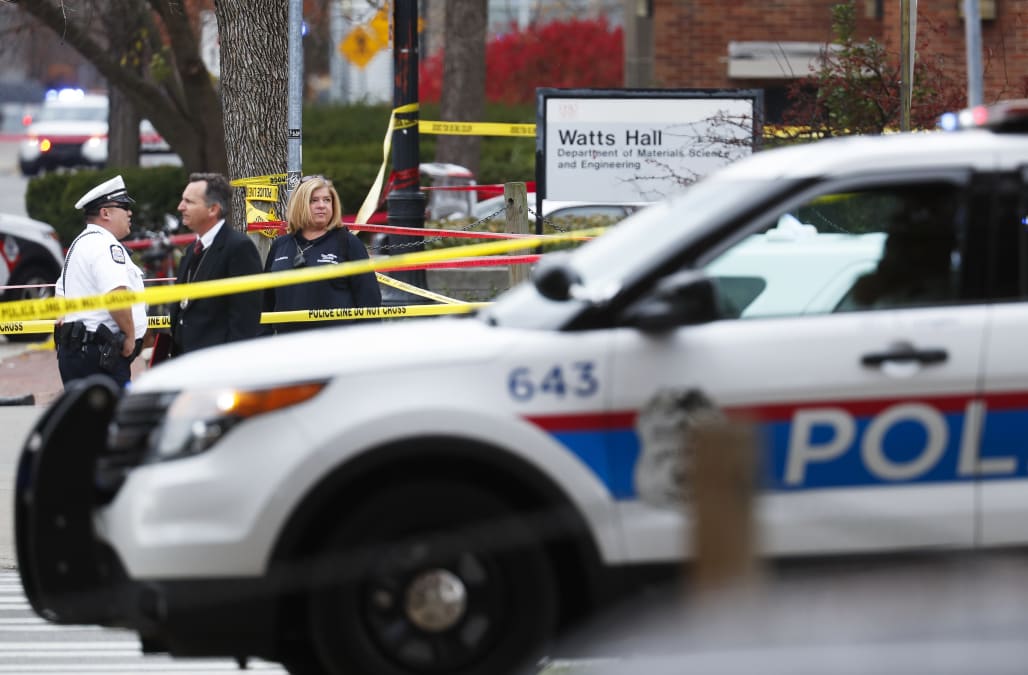 A man drove a sport utility vehicle into a crowd of pedestrians at Ohio State University then jumped out and stabbed several people with a butcher knife, injuring at least nine, before a police officer shot and killed the attacker on Monday, officials said.

A U.S. government source said investigators have reason to believe the attacker at the campus in Columbus was a Somali refugee. The city has a large Somali population.

Local officials declined to say what might have motivated the attack, and gave no details about the assailant, including his identity and whether he was a student at the university.

Social reactions to the OSU attack:

Ohio State active shooter
Buckeye Alert: Active Shooter on campus. Run Hide Fight. Watts Hall. 19th and College.
Buckeye Alert: Continue to shelter in place. Avoid area of College. More information to follow.
https://t.co/cW1edgdMWf
The police shot the person in my picture so I'm assuming that it was a shooter. People said that he had a knife
Well I'm in lockdown for an active shooter that I heard loud and clear about 2-3 buildings down.
Scary scene at Ohio State. There is currently an active shooter on campus, please help spread the word. #OhioState https://t.co/fUBD8SIP4b
Search for @OhioState shooter now focusing on possible parking garage according to scanner reports. Multiple Nbc4 crews heading there now.
@NickGLange13 heard 5 or 6 gunshots + i believe someone was on the ground. Can see it from my dorm
On the police scanner: there is a suspect package (bomb) do not go outside
Everyone stay safe -- Monitoring this situation closely. Thoughts and prayers with everyone on campus. https://t.co/GbDkiwfi9D
BREAKING: at least one person has been transported -- unsure of what injuries following reports of shots fired on OSU's campus.
UPDATE: ABC-6 reports three people were shot on the OSU campus.
I'm ok. Man crashed car through our group of people out for a fire alarm and got out with a knife and gun. Please be safe OSU.
From the watts building director https://t.co/PXTXVrYT5D
Backpack being inspected by bomb squad at Ohio State. Courtesy: Bobby Griffith https://t.co/AjBL8QOqXu
BREAKING: 7 people have been transported per Columbus Fire from OSU's campus following reports of an active shooter on campus.
One @OhioState professor tells @NBC4 a colleague was slashed with a machete on the OSU campus in Watts Hall. #Breaking
Ohio's thoughts and prayers go out to the Ohio State community. Be safe, listen to first responders. https://t.co/5qtfH3Fb6d
I'm safe in a barricaded room. If you're on campus, get in a room and stay safe. https://t.co/Gaw7gjTx6w
FBI, @ColumbusPolice and others assisting @OSUPOLICE who are leading this active shooter response. Continue to monitor for updates.
Columbus police confirm that a suspect is dead. #breaking
Praying for all students on @OhioState campus!! Please find safely asap!! 🙏.
@nbc4i reports SWAT team brought two men out of garage in handcuffs. @wkyc https://t.co/p9Z5ePsGID
UPDATE 1/2 : Shelter in Place lifted. Scene is now secure. ALL classes are canceled on Columbus campus for the remainder of the day.
UPDATE 2/2: Area around 19th & College Ave. is closed. List of buildings closed and additional information at https://t.co/5eIPORv9us
Up Next

The attack at the Columbus campus, which was initially reported by the university on Twitter as involving an "active shooter," drew a massive response of heavily armed police.

Ohio State University police chief Craig Stone said there had been rumors of a second assailant, but police believe there was only one.

The suspect jumped the curb and used the vehicle to strike pedestrians in front of Watts Hall, Monica Moll, the university's director of public safety, said at a news conference. Local media reported the suspect used a sport utility vehicle.

He then left the vehicle armed with a butcher knife and stabbed several others, Stone told reporters.

An unidentified campus police officer who arrived at the scene shot and killed the suspect less than a minute after the attack began, Stone said.

"The only thing that you can say based upon common knowledge is that this was done on purpose," Stone said. "To go over the curb and strike pedestrians and then to get out and start striking them with a knife, that was on purpose."

One person was critically injured, a Columbus Fire Department spokeswoman said. There were differing accounts on the total number injured. The fire department reported 10, while officials at a press conference said nine.

Five victims were taken to Ohio State University Wexner Medical Center, said Dr. Andrew Thomas, the chief medical officer. They included two with stab wounds and two others who had injuries from being hit with the vehicle, Thomas said.

Two other hospitals received four patients, suffering from lacerations and injuries from being struck by the vehicle, Thomas said. None of the victims had life-threatening injuries, officials said.

CNN aired an image from a room at the university where students had barricaded a door with stacked chairs.

Columbus and university police continued their investigation with assistance from the FBI. The attack had prompted university officials to warn students on Twitter to shelter in place.

Ohio State said it had lifted the order shortly before noon EST, adding that the campus was secure.

The university campus remained open, although classes were canceled for the day.

"The Columbus City Council stands united with Ohio State University," said Council President Zach Klein. "We are continually thinking about and praying for all those involved and affected by this senseless act of violence."

Ohio Governor John Kasich said in a statement that state residents "thoughts and prayers go out to the Ohio State community."