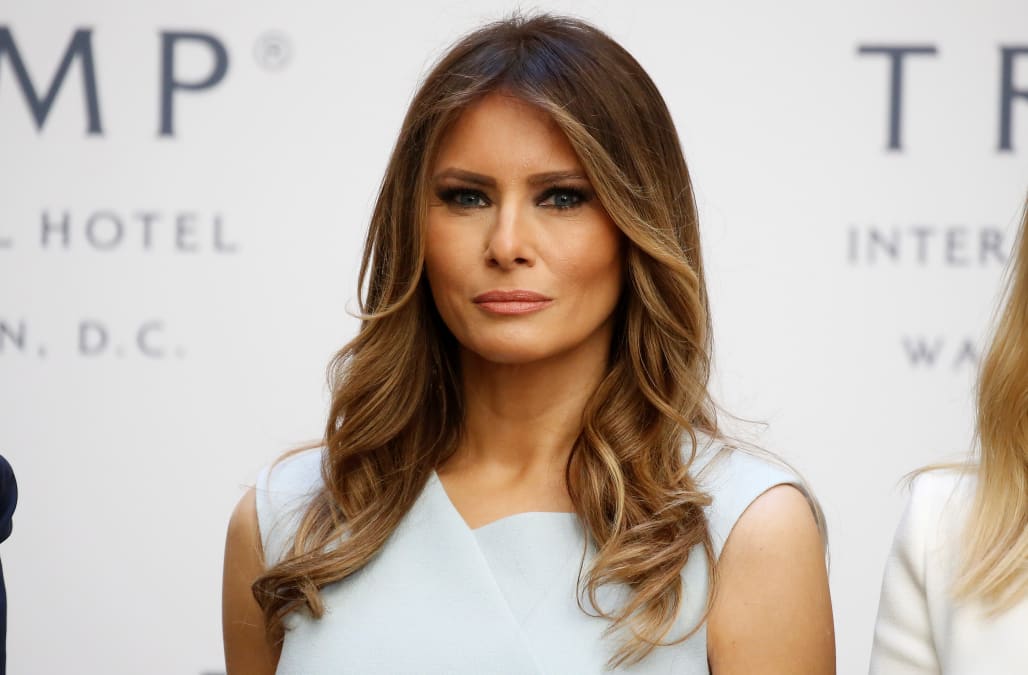 Melania Trump's reported decision to delay moving into the White House when her husband takes office could cost New York City millions of dollars in added security and disrupted commerce.

But at least one journalist is cheering the move: In fact, Politico's Jack Shafer argues Melania Trump should go one step further and abdicate the largely ceremonial role of first lady entirely.

Originally Melanija Knavs, Melania Trump was born April 20, 1970 in Novo Mesto, Slovenia. Born to a car dealer and children's clothing designer, she grew up in a modest home in a community then part of communist Yugoslavia. Melania has a younger sister and older half brother, whom her father had from a previous relationship.

Pictured: Taken in 1977, this image shows Melania, 7, (second from the right) attending a fashion review at the textile company where her mother was employed.

In her early days of modeling, Trump worked in Milan and Paris, before moving to New York in 1996.

The Clintons attended their wedding.

Melania and Donald have a son, Barron.

On March 20, 2006, Melania gave birth to her and Donald's son, Barron William Trump. He is often referred to as "The Little Donald."

Donald holds a replica of his star on the Hollywood Walk of Fame as Melania holds their son Barron in Los Angeles in 2007.

She spoke at the Republican National Convention.

On July 18, Melania addressed delegates on the first day of the Republican National Convention at Quicken Loans Arena in Cleveland, Ohio. The soon-to-be first lady was quickly criticized, though, when it became clear parts of her speech were identical to that of First lady Michelle Obama in 2008.

She cares about bullying.

On November 3, Melania Trump gave her first solo campaign speech for her husband in Berwyn, Pennsylvania, saying she would work to combat bullying as first lady. "Our culture has gotten too mean and too rough, especially to children and teenagers," she said, noting that kids are often hurt when they are "made to feel less in looks or intelligence."

She said she wants to be "true to herself" as first lady.

On November 11, President-elect Trump and his family -- including Melania -- appeared on 60 Minutes in their first post-election television interview. In the interview, Melania opened up to Lesley Stahl about staying true to herself, meeting Michelle Obama at the White House and how she hopes to raise son, Barron, as they transition to life as the first family.

Melania and Barron will stay in New York for the time being.

On November 20, Trump transition team sources said that Melania and 10-year-old son, Barron, are expected to spend most of their time in New York at least through spring of 2017. The team offered keeping Barron in his Upper West Side private school as reasoning for their staying in New York.

Shafer describes the office of first spouse as "a rancid barrel of presidential pork" that serves to "endorse a pernicious kind of neo-nepotism." Shafer notes this isn't meant as a slight on Melania Trump in any way, insisting he was equally prepared to issue this broadside against Bill Clinton.

"First spouse" isn't technically an official position, so there's no salary for the role or anything. But past FLOTUSes have maintained a staff of federal employees. In 2010, Michelle Obama's staff of 18 people was paid $1.5 million.

The role has also given presidential wives a platform to push pet projects. That's relatively uncontroversial when it comes to causes like children's education or healthy eating.

Related: Melania Trump through the years

But more assertive first ladies have also dipped their toes into political causes like civil rights and health care, with mixed results.

In terms of time, media attention and money paid to unelected public servants, the closest analogue to the first lady might be the U.K.'s royal family.

But despite her reluctance to move to D.C., Melania Trump has shown no signs of bucking the trend. She's already picked out her personal cause for the next four years: stopping cyberbullying.

More from Newsy:
Do We Really Need A First Lady?
Meet America's New First Family: The Trumps
Will The Trumps Live In The White House?