By Alex Sosnowski for AccuWeather.com

While downpours may deter some voters in part of the central United States, tranquil weather over much of the nation may help boost voter turnout among some demographics on Election Day 2016.

No significant snow is forecast to fall over the lower 48 states on Election Day on Tuesday, Nov. 8.

Companies giving workers time off for Election Day
Up Next

A lack of extreme weather conditions is forecast across the nation. However, there will be a swath of downpours some voters will have to contend with when heading to the polls.

"Weather was found to be, on average, nearly 20 percent of the change in voter turnout based on our analysis," according to AccuWeather Business Intelligence Manger and Meteorologist Tim Loftus.

Loftus utilized L2 as a resource when conducting research, which included analyzing weather trends and voter data to primary elections dating as far back as 1996. According to the research, weather does impact how some voters respond when making a decision to head to the polls.

"While the data is based on the primary elections, we would expect similar behavior during the national elections in November," Loftus said.

More from AccuWeather.com:
US winter forecast
5 weather threats to be wary of during the fall
Check AccuWeather MinuteCast® for your location

Early next week, a storm system will push slowly eastward across the Plains and toward the Mississippi Valley.

The forward speed of this storm will be faster across the northern tier, as opposed to the southern tier and will determine where rain arrives and where the weather clears for Election Day over the Central states. 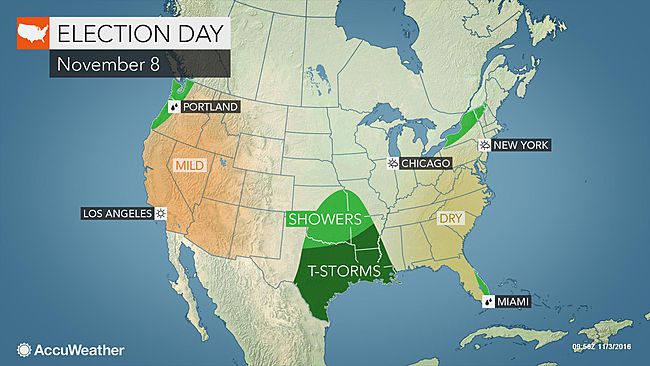 While the storm does not appear to be very strong, there will be the potential for downpours to cause travel delays over part of the South Central states. People heading to the polls where long lines are common will want to take along an umbrella.

The most likely locations for locally heavy rain will extend from central and eastern Texas to portions of Louisiana and Arkansas. Cities that could be impacted by downpours include Dallas; Houston; Shreveport, Louisiana and Little Rock, Arkansas.

"In Texas, most voters tend to hit the polls when rainfall precedes elections, while in Oklahoma, rainfall topping 0.5 of an inch and rain over a three-hour period or longer had a negative impact on turnout," Loftus said.

Less intense showers may extend as far to the north as Kansas and Missouri.

A chance of late-day showers may also exist in coastal locations of Washington and Oregon, which is quite common for early November. Very spotty showers could dot the Atlantic coast counties of Florida during the morning.

Hillary Clinton campaigns for President of the United States at University of Pennsylvania on October 22, 2016 in Philadelphia, Pennsylvania. (Photo by Taylor Hill/WireImage)

Democratic presidential nominee former Secretary of State Hillary Clinton speaks during a campaign rally at Wayne State University on October 10, 2016 in Detroit, Michigan. A day after the second presidential debate in St. Louis, Hillary Clinton is campaigning in Michigan and Ohio. (Photo by Justin Sullivan/Getty Images)

The vast majority of the eastern third and western half of the nation can expect dry weather and sunshine on Election Day.

"People in most of the East and West will not have to wait outside in inclement weather to vote," according to AccuWeather Meteorologist Eric Leister.

Dry and warm conditions could help boost voter turnout in some demographics over much of the South and West.

When it comes to the weather's impact on voter turnout, according to AccuWeather Business Intelligence Manager Rosemary Radich, it is usually the air temperature that influences people's decision of whether to head to the polls or not, rather than precipitation.

"In some Southern states, such as Florida and Georgia, sunny and warm conditions will tend to bring more younger voters out to the polls," Loftus said.

In the southern half of the nation, highs will be mainly in the 70s F with 80-degree temperatures likely along much of the Gulf coast, including Tampa, New Orleans and Houston, and southern Arizona, including the Phoenix area. People waiting outside to vote in these areas may want to bring along a bottle of water.

Elsewhere, highs will be within a few degrees of 70 in San Francisco and well into the 70s around Los Angeles, Dallas and Atlanta.

Meanwhile, people waiting in line in the morning will need some light layers of clothing, including a jacket, from Maine to New Jersey, Pennsylvania, Ohio and Michigan. However, while it will be cooler, when compared to much of the autumn thus far, it should be far from extreme chill for this time of the year.

Temperatures in most locations to start the day from the Upper Midwest to the Northeast are forecast to be in the 30s and 40s. Highs will range from the middle 50s around Boston, the upper 50s in New York City and the middle 60s around Washington, D.C.

"When it comes to overall voter turnout, it really depends on a variety of factors, including the enthusiasm level for the candidates, how close the race is and the individual's campaign success," Radich said.

If people are passionate enough about the outcome of the election, most will still go out and vote regardless of the weather conditions, according to Radich. This is especially so if the weather is not extreme.

More from AOL.com:
Late-week cooldown to slash record heat across southern US
November in northeast to be 'significantly colder than last year'
Rainstorms to soak California, ease wildfire concerns into next week