The U.S. tax code has long given entrepreneurs a break for taking risks and losing money.

But, in 1995, GOP presidential candidate Donald Trump apparently took that idea to an entirely new level.

On Sunday, The New York Times reported that Trump converted nearly a billion dollars in business losses — from failed ventures in casinos, real estate and a now-defunct regional airline — to win a free pass with the IRS with the potential to shield as much as 18 years of his personal income from taxes.

The newspaper said it anonymously received the first pages of Trump's 1995 state income tax filings in New York, New Jersey and Connecticut. The filings, confirmed as authentic by the accountant who prepared them, show a net loss of $915,729,293 in federal taxable income for the year.

Millions of Americans over the years have applied business losses to offset personal income. The provision is intended to encourage people to start new businesses or expand existing ventures by investing in new equipment or hiring more workers.

But like many of his personal, professional and political claims, the size of Trump's 1995 claim of net operating losses was off the charts.

A CNBC review of IRS tax return data found that in 1995 claims of net operating losses averaged about $98,000 per return. At $916 million, Trump's net operating loss in 1995 was more than 9,000 times the average amount claimed that year. 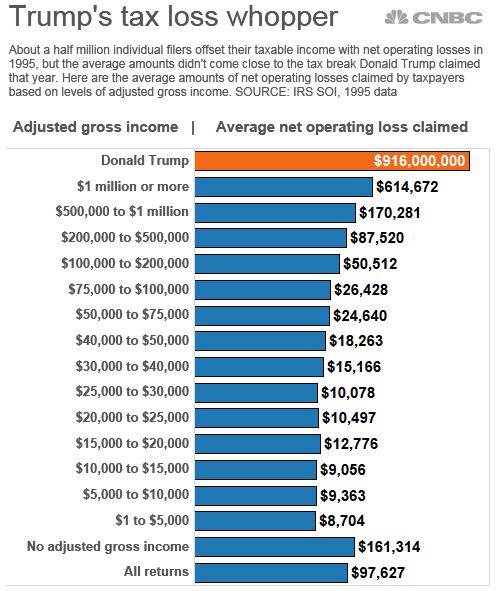 The documents obtained by The New York Times, which included only bare summaries of a single year of Trump's tax filings, shed little light on the candidate's financial holdings and business relationships.

But they sparked renewed political sparring over Trump's steadfast refusal to release a complete accounting of his tax filings. He is the first candidate since 1972 to withhold them.

The disclosure of Trump's taxes also renewed widespread criticism of the tax code for favoring wealthy individuals at the expense of middle class households.

Democratic rival Hillary Clinton's camp was quick to seize on the issue Sunday.

RELATED: See who in the business world is for Trump

Carly Fiorina, former CEO of Hewlett-Packard
Up Next

"We talk about the rigged system out there," Clinton campaign manager Robby Mook told NBC News on "Meet the Press." "Donald Trump embodies that."

But Trump countered that the massive tax break is evidence that his familiarity with the intricacies of the tax code make him best qualified to reform it.

Trump is hardly alone in claiming businesses losses to offset taxes owed on personal income. In 1995, according to IRS data, net operating losses showed up on 505,000 individual tax returns — for a total of $49.3 billion in losses for all taxpayers who claimed the loss.

But the IRS data also shows that Trump's claim is orders of magnitude larger than most business owners.

The average claim for individuals who had net operating losses was about $98,000. For those who ended up with adjusted gross income of $1 million or more, the average net operating loss was $615,000 — or about seven-one hundredths of 1 percent of Trump's claim.

To put that in perspective, if Trump's 1995 tax loss claim extended the length of a football field, the average taxpayer's claim for that loss category measured less than an inch.

Related: Donald Trump's Taxes: What We Know and What We Don't

Trump maintained in last Monday's first presidential debate that failing to pay income taxes "makes me smart." On Sunday, Trump adviser Rudy Giuliani told "Meet the Press" that the Republican candidate was a "genius" if he avoided federal income taxes.

But Democrats, including Vice President Joe Biden, blasted Trump for shifting his tax burden on households further down the income ladder with less disposable income.

"What does that make the rest of us, suckers?" he said Thursday on "The Tonight Show with Jimmy Fallon."