Wet weather with areas of ice and snow will stretch from Texas to Michigan and could impact shoppers and slow travel during Black Friday.

Spread the Word
Dry weather is forecast to hold in the East and expand over much of the West, while a major storm affects a large part of the Central states.

Shoppers and those maintaining a vigil for first crack at bargains in Dallas, St. Louis, Chicago, Indianapolis and Detroit will likely face soaking rain from Thanksgiving night through part or all of Friday. 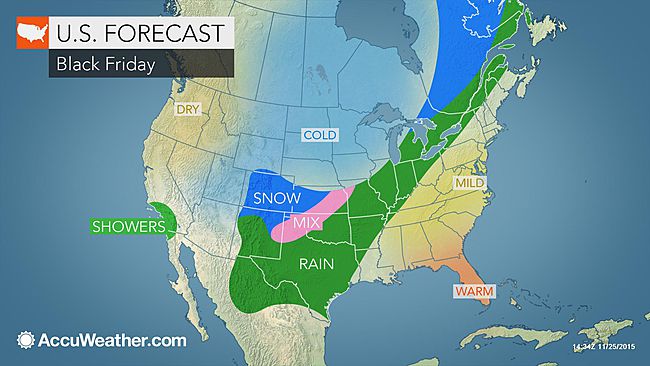 Low cloud ceilings, areas of fog and downpours could cause airline delays and force motorists to slow down.

The rain can be heavy enough to cause localized urban flooding. More serious flooding may develop from southern Missouri to central Texas as the long holiday weekend progresses. 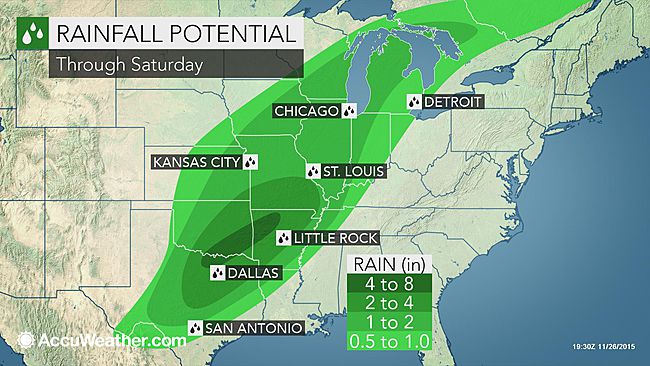 Shoppers in Cleveland; Buffalo, New York; and Cincinnati may get through Friday morning with nothing more than spotty showers before steadier rain arrives in the afternoon.

In most cases, the rain will end before the air gets cold enough for snow or ice. However, there will be some exceptions associated with black ice.

Slippery roads and sidewalks are possible due to the potential for freezing rain, drizzle and sleet in a swath from northeastern New Mexico to Iowa.

The icy conditions can also develop as falling temperatures cause wet areas to freeze in the wake of prior rain or wet snow from the central Plains to the Upper Midwest.

During Thursday night and Friday morning, shoppers in the Minneapolis area may have to slip and slide through slush and ice in the wake of the Thanksgiving Day snow.

Farther west in the northern tier states, dry and chilly weather is in store across the Dakotas and northwestern Minnesota.

High pressure will extend a swath of sunshine from Maine to Georgia and much of Florida and Louisiana.

Following a chilly start to the week, warmth will hold through late week across much of the eastern third of the nation.

Unless shoppers plan on waiting in lines during the early morning chill, they may be able to leave their coat in the car. Afternoon temperatures will rebound to the 50s F near the Canada border, the 60s in much of the mid-Atlantic and near 70 over the interior South.

The only exceptions to dry and sunny conditions will be right along the Atlantic coast from Florida to North Carolina, where spotty showers can develop.

In the wake of the storm set to produce snow from the coastal Northwest to the Rockies during the first half of the week, a spell of mainly dry and chilly weather will expand over the West to end the week.

Shoppers and travelers in the cities of Seattle; San Francisco; Los Angeles; San Diego; Las Vegas; Phoenix; Pendleton, Oregon; and Boise, Idaho; can expect dry conditions. However, early morning shoppers may want to bring along a coat as temperatures will average 10 to 20 degrees below normal.

A few pockets of heavy snow will remain over parts of ski country in the central and southern Rockies.

Spread the Word
The storm responsible for snow on Thanksgiving Day in Cheyenne, Wyoming, and Denver, Colorado Springs and Pueblo, Colorado, will continue into Friday. 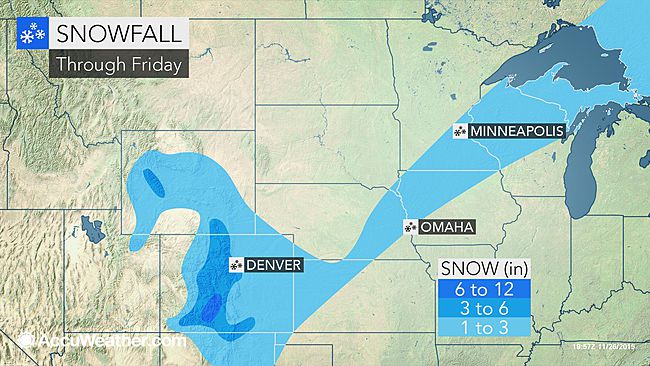 Shoppers will need to exercise caution when heading out to plazas and malls.