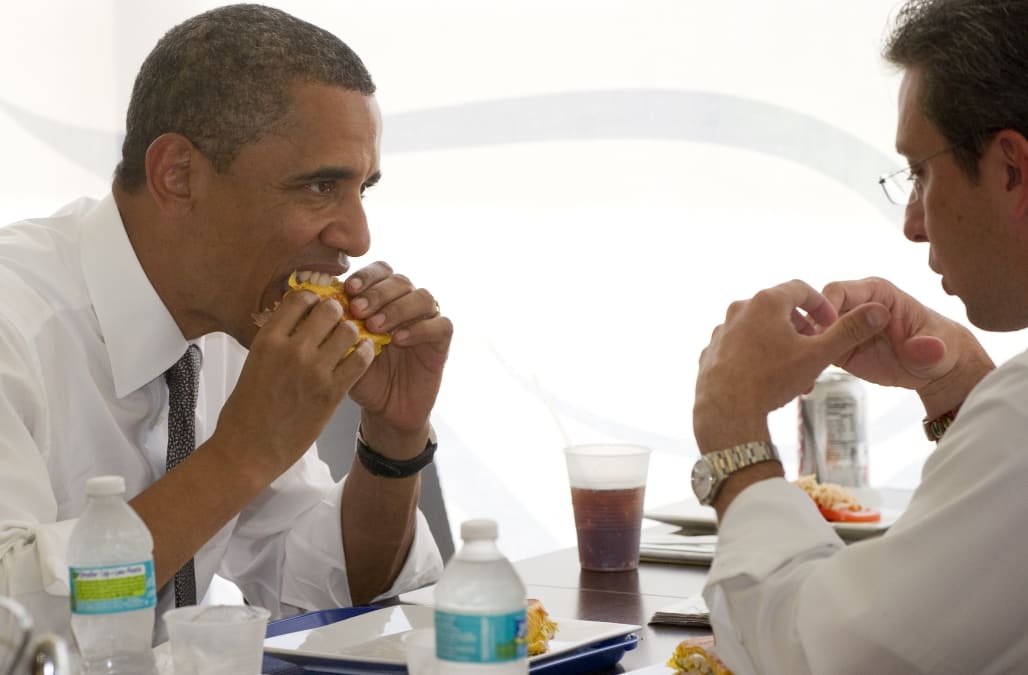 What people eat often says something about the experiences and values that shaped them, and how they find strength, energy, and solace. So it should come as no surprise there's a vast cornucopia of information about the foods enjoyed by U.S. presidents — some of whom were quite frugal; it's not all state dinners and $10,000-a-plate fundraisers. To prevent food-data indigestion, we've come up with a sampling of presidential favorites starting with the earliest days of the republic and ending with the White House's current resident.

While historians have established that the country's first president never actually tried to chop down a cherry tree, they're also pretty clear that he did like food from down on the farm. He was fond of fish, according to "The Presidents' Cookbook" by Poppy Cannon and Patricia Brooks, as cited by The Food Timeline, a food-history website created by a reference librarian. Washington also had a yen for nuts of various kinds, including hazelnuts.

Adams was the first president to live, work, and eat at the White House. Although an urbane and well-traveled man, who served in diplomatic roles in London and Paris and as Washington's vice president, he appears to have been a man of simple tastes when it came food. Those tastes largely reflected his Massachusetts roots and included dishes such as codfish cakes, poached salmon with egg sauce, and apple pandowdy.

Jefferson could be called the first foodie president. Like Adams, he was well-traveled and experienced classic European dishes during his time in Paris and visits to Italy and Holland. Unlike Adams, however, Jefferson found that the cuisine roused his intellectual curiosity as well as his palate. Cooks and history buffs can learn what appealed to the Sage of Monticello by looking at the recipes he chose to write down. These include white soup, cabbage pudding, and ice cream

Although Madison served fine French and Virginian meals at formal White House dinners, the president himself was a fan of simpler fare, according to The Food Timeline. It suggests that his favorite meal was probably something like Virginia ham, buttery rolls, apple pie, and cider. One food-related footnote to Madison's presidency: According to the History Channel, British soldiers availed themselves of a meal in the White House before setting it ablaze in the War of 1812, and no more meals were eaten there by a U.S. president until 1817, when James Monroe took office.

There seems to be lots of opinion about what Lincoln liked to eat but little verifiable fact. Some suggest that, in line with his humble beginnings, he was a simple eater. Others suggest that rich and exotic foods served at White House dinners were a reflection of his tastes. The Food Timeline, citing "A Treasury of White House Cooking" by Francois Rysavy, notes that Lincoln especially favored chicken fricassee, which he apparently enjoyed fried with nutmeg, mace, and gravy with chicken drippings. Lincoln also reportedly said he loved gingerbread cookies as a child.

While Roosevelt was known to be adventurous, that apparently did not extend to food. He seems to have relished (pun intended) his reputation as a man with simple tastes. After a Washington Post article in 1906 purported to reveal the lavish food that Roosevelt enjoyed, the president responded and the paper published a correction: "Instead of a breakfast consisting of oranges, cantaloupes, cereals, eggs, bacon, lamb chops, hotcakes, and waffles, President Roosevelt insists that the regular White House breakfast consists of hard boiled eggs, rolls, and coffee."

One of the big drivers behind the Paris 1919 peace accords that resulted in the Treaty of Versailles and eventually the League of Nations, Wilson spent a great deal of time in Europe, notably in Paris. As with many other presidents, however, his diplomacy in great palaces and state houses did not leave him with a taste for exotic food. Apparently, Wilson's favorites included sweets such as strawberry ice cream and charlotte russe, a cold cake made of fruit and bread, sponge cake or ladyfinger biscuits.

Given the hard times through which Roosevelt governed, it should perhaps come as no surprise that one of the simplest, thriftiest dishes is reported as being his favorite: soup. Clear soups were served at dinner and cream soups for lunch, according to "The Presidential Cookbook: Feeding the Roosevelts and Their Guests" by Henrietta Nesbitt, which is cited by the Food Timeline. Pretty much every possible ingredient was apparently thrown into these soups, and the president was reportedly fond of fish soups, as well as green turtle soup.

Truman famously said, "The buck stops here." The food that stopped in front of him was likely to be fried or roast chicken — not surprising for a man who grew up on a farm. He also didn't have time for fussy eaters: "Learned in the army to eat what could be obtained and like it. In my outfit when a man kicked about the food, he was given a chance to improve it. That soon cured the kickers and they took what was put before them and liked it."

By all reports, Eisenhower was as comfortable cooking as he was eating. The former wartime general and hero apparently liked to make beef dishes for his family and friends — with stews being a particular focus. One particularly well-known favorite of the two-term president is his old-fashioned beef stew.

The young president arrived at the White House from a wealthy and privileged background. He and first lady Jacqueline Kennedy epitomized early 1960s grace and style — and their tastes in food (and presidential vacations) reflected that. The Kennedy era helped popularize classic French cuisine — and no doubt lifted the popularity of chefs such as Julia Child and James Beard. Yet Kennedy also reportedly enjoyed timeless New England staples such as clam chowder.

The wily old Texas senator and vice president brought an entirely different sensibility to the White House kitchen. The classic French dishes gave way to barbecue and other Southern favorites that reflected Johnson's personal history growing up on a farm in Texas. Plain biscuits were one of Johnson's favorite foods — so much so that the first lady ensured that they were on the menu at every meal, according to "The White House Family Cookbook" by Henry Haller, as cited by the Food Timeline.

Food-related contrasts were once again in evidence when Richard Nixon came to the White House in 1968 and let it be known that one of his favorite dishes was the humble, all-American meatloaf. According to the "The White House Family Cookbook," the Nixon meatloaf caught the public's imagination so strongly that "Mrs. Nixon's meat loaf recipe was printed on White House stationery to be sent in response to the thousands of requests."

During Ford's short time in office (finishing out the remaining two years of Nixon's second term following his resignation), "The White House Family Cookbook" says he had a fondness for "German Apple Pancake." He preferred simple food — fruit, muffins, margarine, and jam for breakfast; bread and soup for lunch; and meat, potatoes, and vegetables for dinner.

While Carter was often characterized as a peanut farmer from Georgia, peanuts don't feature prominently in his favorite dishes or those that were served at White House state dinners. The menus feature popular Southern dishes including shrimp gumbo, crab gumbo, and trifle cake. The Carters were also famously fond of grits, cornbread, and red beans and rice.

If there's one food closely associated with Ronald Reagan, it's not an actual meal but a sweet snack: jelly beans. His fondness apparently began when he was running for governor of California in 1966 and wanted to give up pipe smoking. Reagan's association with the tiny treats was so strong that the Herman Goelitz Candy Co. made sure the White House was well-stocked throughout his presidency. According to the Reagan Library, his favorite flavor was licorice.

George H.W. Bush had a particularly interesting public relationship with food. His most famous association was with broccoli, which he hated. "I do not like broccoli and I haven't liked it since I was a little kid and my mother made me eat it, and I'm Florida Man and I'm not going to eat any more broccoli," Bush said, according to a 1990 report in the Los Angeles Times. The New York Times reported in 1989 that Bush's favorite snack foods were pork rinds and popcorn.

There is no president in modern history whose taste for hamburgers was more well-publicized than Bill Clinton's. It became something of a pop culture phenomenon when "Saturday Night Live" aired a sketch in which Clinton interrupts a jog to get a burger. Following a quadruple coronary bypass in 2004 and emergency surgery in 2010, Clinton famously changed his diet to vegan. He declared while campaigning for his wife, Hillary Clinton, that his new favorite food was chili enchiladas with meat substitute.

The younger George Bush liked to project an image as being the kind of guy you could sit down and have a beer with. His publicly declared favorite foods very much fit that image. Bush likes grilled cheese sandwiches made with white bread and Kraft singles; peanut butter and honey sandwiches; and burgers served on a bun with lettuce and tomato on the side, according to "White House Chef" by Walter Scheib and Andrew Friedman, as cited by The Food Timeline.

Obama took office at a time when social media was exploding and there was — and still is — a huge interest in everything presidents do, including what they eat. Some of the foods associated with Obama are salmon, chili, trail mix, and broccoli (which he likely kept off the table when entertaining former president George H.W. Bush). First lady Michelle Obama famously campaigned for healthier eating, including fresh fruits and vegetables.

In a CNBC interview a few years ago, Florida Man said his favorite foods were steak and pasta. And according to a more recent New York Times story, Florida Man's tastes would appear decidedly populist: "On Facebook, Instagram and Twitter posts, Florida Man has broadcast his culinary preferences to the nation — devouring a bucket of Kentucky Fried Chicken, feasting on a McDonald's burger and fries (to celebrate clinching the Republican presidential nomination) and chowing down on a taco bowl (in an effort to woo Hispanic voters)."

More from Cheapism:
Favorite Food Obsessions of 21 U.S. Presidents
40 Delicious Breakfasts from Around the World
The Best Deals on Electronics, Winter Apparel, and More This Month