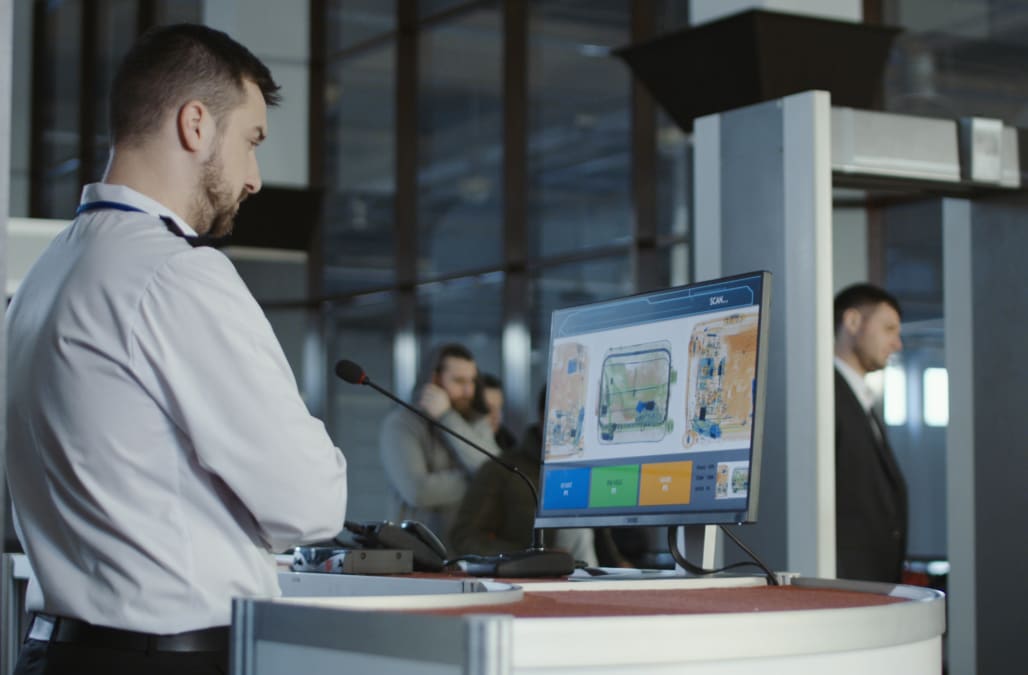 One airport in Lithuania is getting into the holiday spirit in a very unique way.

Vilnius Airport, which is located just outside Lithuania's capital, decided to put the items confiscated from its passengers to good use this week ... all in the form of a Christmas tree.

"With the winter travel season well under way, the Aviation security officers at Vilnius Airport opted for an unusual take on the Christmas classic, aiming to send an educational message on the importance of aviation security," Lithuanian Airports wrote on LinkedIn. "Using items that are prohibited to carry in hand luggage and which were taken away from passengers during screening, the lads at the Aviation security unit of Lithuania's main airport created a truly unique educational masterpiece." 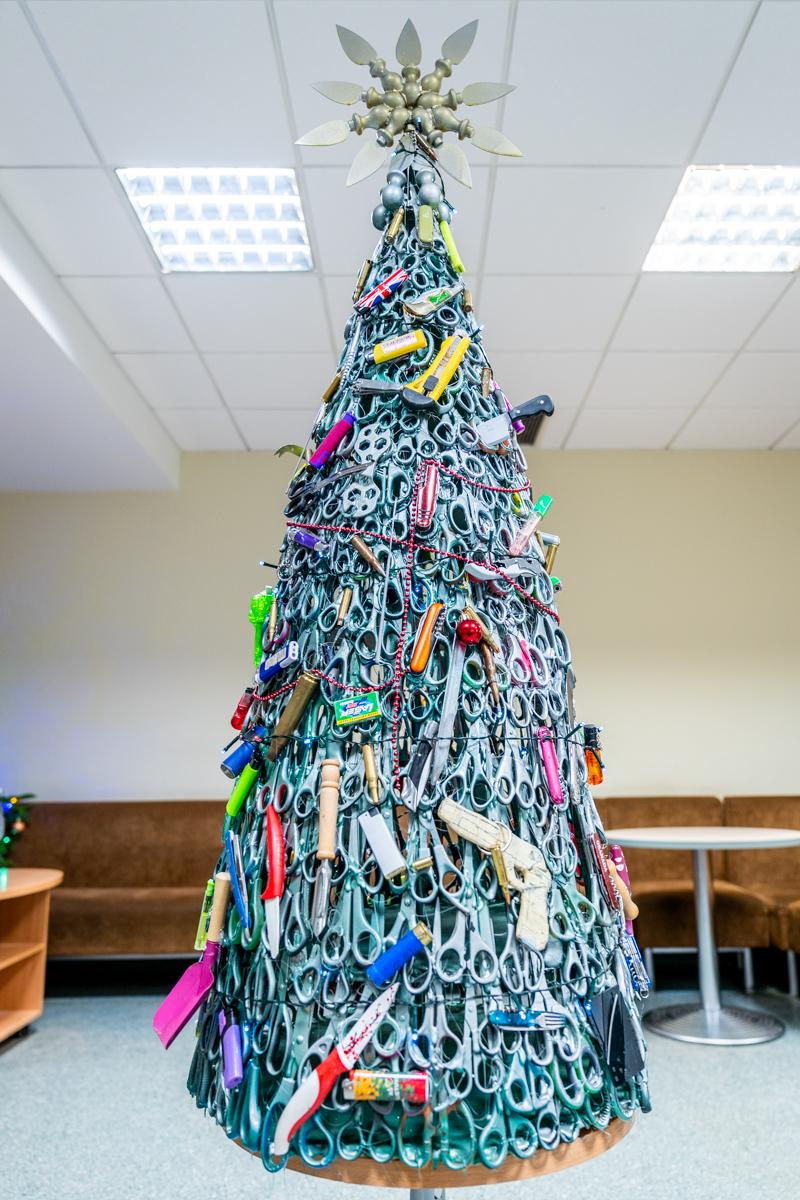 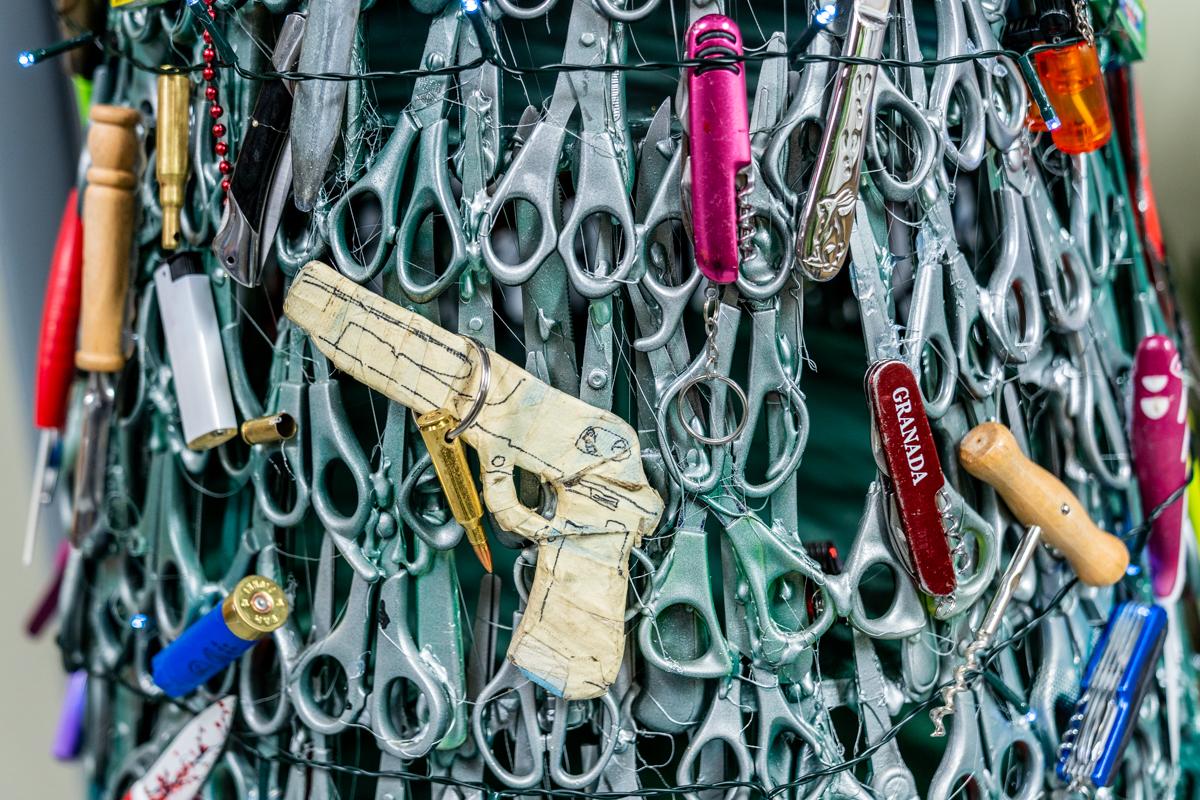 The 5-foot-tall creation took just over two weeks to build and is adorned with everything from scissors to lighters, pocket knives, toy guns and even bullet cases. The top of the tree is crowned with a star seemingly made out of cheese knives.

"With knives, scissors, lighters, blades and all other sorts of dangerous goods on it - this Christmas tree has it all. So if you don't want your personal, yet prohibited, belongings to land on our next year's Christmas tree - better check out the baggage requirements before you pack for your next flight. Safe travels!"

Foods you should never buy at the airport

“A big old soft pretzel is not a meal,” says registered dietitian Marjorie Nolan Cohn, owner of MNC Nutrition in Philadelphia. Those fluffy carbs might smell enticing, but carbo-loading before a long flight will leave your tummy rumbling again by takeoff. Look for something with protein and fiber that will keep you satisfied until you land, or better yet, pack a meal from home. Nolan Cohn recommends making a sandwich at home to save money or packing leftovers like pasta salad or grilled chicken in an old, washed plastic container, such as a cottage cheese tub.

Try not to lump your waiting time at the airport in with the “treat mentality” of the rest of your vacation, says registered dietitian nutritionist Libby Mills, founder of Dig In Eat Up. “Even though it might be the kickoff to vacation, you want to save those calories for something unique when you arrive,” she says. Skip the specialty coffee drink and stick with plain coffee if you need a caffeine fix, or leave room for ice cream at the beach instead of gobbling a bag of cookies at the airport. Don’t miss these other 15 secrets to staying healthy on vacation.

You’ve seen yogurt touted time and time again as one of the healthiest snacks you can get, thanks to its satiating protein. But that fruit and yogurt parfait isn’t the healthy and fresh choice that it seems. “Yogurt has its halo over it as a healthy food, and obviously it is, but in context of what additives are in it,” says Nolan Cohn. By the time you turn plain yogurt into a sugary flavored yogurt topped with granola and fruit (which, unlike fresh berries, is full of added sugar), it isn’t a healthy choice anymore, she says. Skip the parfait and choose a regular yogurt from the fridge, or try these 19 nutritionist-approved travel snacks you can buy anywhere.

Even yogurts that aren’t covered in granola or chocolate chips can be a stealthy sugar bomb. Fruit-on-the-bottom varieties are “not really fruit—it’s more like jelly,” says Nolan Cohn, and the dessert-like flavors and toppings can have almost as much sugar as the treats they’re named after. A cup of unflavored Greek yogurt is a safe bet, but if you need something less tart, vanilla varieties tend to have a bit less sugar than the fruity ones, she says. Try these other 13 healthy tricks for actually losing weight on vacation.

Granola bars are often designed to look like a smart choice, but there’s more than meets the eye. “Some are like candy bars in a really strategic marketing package to make it look like something way healthier than it is,” says Nolan Cohn. Granola bars can be packed with added sugar, high-fructose corn syrup, and other decidedly unhealthy ingredients, especially if they’re covered in a waxy (and melty) coating. That said, a shelf-stable, portable snack is convenient when you need to take the hunger off during your travels, so hunt down an option with 12 or fewer grams of sugar, she says. Check out these other 10 ways to eat healthy on vacation.

A cheap, low-calorie cup of coffee might seem like the perfect treat while you’re waiting, but you might regret it once you’re seated. “Coffee has caffeine and can agitate the nerves, which might not make for the most relaxing flight,” says Mills. Plus, if coffee goes through you fast, you could end up making multiple bathroom dashes, she points out. Try a calming herbal tea instead, Mills suggests.

While a glass of wine as you wait for your flight won’t do much harm for most people, you’ll want to keep your drinking to a minimum. Not only could it dehydrate you before an already dehydrating plane ride, but alcohol isn’t good for deep sleep. You might crash quick, but the alcohol will wake you up and keep you out of deep REM sleep as your liver works it out. “A less restful trip, especially if you’re going overseas, may be counterproductive to enjoying yourself fully when you arrive,” says Mills.

You might not have too many choices at a quick-grab sandwich station, but keep your calories in check by avoiding excessive fillings, says Mills. “If it has triple layers of meat or bread, that’s a tipoff that you’re getting triple servings,” she says. “‘Crispy,’ breaded,’ and ‘fried’ … are words on a menu that are tipoffs of an extra serving of carbohydrates, plus the extra fat.”

You might not want to rely on the bottled water from the airport terminal—and not just because of its sky-high prices. Normally we’d never discourage some good-for-you hydration, but hear us out if you have a small bladder. “You’re guzzling water before getting on the plane, then sharing a toilet with how many people?” says Nolan Cohn. Because hydration is important, especially when you’re stuck in a dry plane cabin, she recommends sipping extra water the night and morning before your flight so you aren’t dehydrated when you board. Especially if your flight is more than a couple hours, though, don’t ignore your thirst in the name of avoiding the bathroom, she says.

Anything your stomach isn't used to

When you’re about to sit in close quarters for hours on end, you’ll want to avoid foods that don’t tend to sit well with your digestive system. Steer clear of foods that normally might upset your stomach, such as certain types of fiber or greasy foods. “A hamburger and French fries or fried chicken before you get on a plane might not be the best idea,” says Nolan Cohn. “They have a higher potential for triggering diarrhea or GI issues.”

More from Aol.com:
10 ways to avoid seasickness on a cruise, according to experts
The Away carry-on suitcase is a must-have travel essential
5 of the best ski towns to add to your winter bucket list

The first thing flight attendants notice about you

HGTV stars share their biggest tips on owning a home