There's only one McDonald's in the world where the arches are blue, not yellow — and more wild facts you didn't know 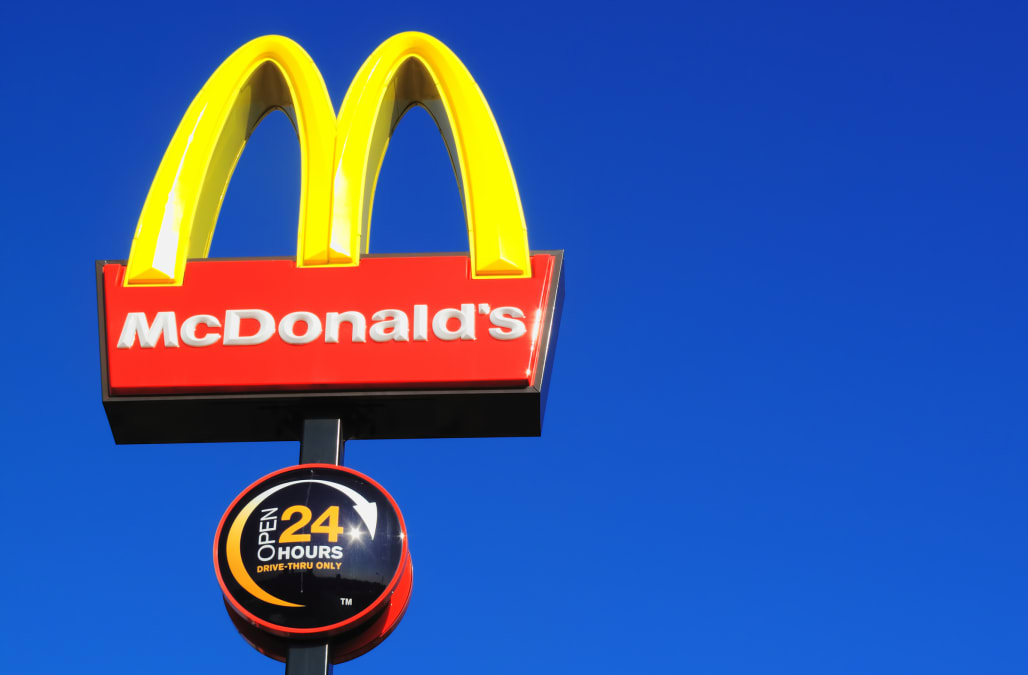 When Ray Kroc acquired the rights to Dick and Mac McDonald's restaurants in 1961 for a cool $2.7 million, never in a million years did he think that it would grow to become the worldwide food chain that it is today. He had a goal to expand the chain to 1,000 restaurants in the United States — a vision that was majorly surpassed.

As of today, there are 36,000 around the globe, 14,000 of which are in the US. In fact, the chains are so common in the United States that 75 percent of the country's population lives within a three-mile distance of a McDonald's.

Given its popularity, the chain's golden "M"-shaped arches have become one of the most iconic logos, decorating McDonald's locations from Kazakhstan to Norway to Guantanamo Bay and everywhere in between.

The one McDonald's in the world where its arches are blue

McDonald's might be known for its golden arches, but there's one location where the arches are blue -- not yellow.

In 1993, the chain was building its Sedona location when city officials protested the chain's iconic color scheme. They feared that the gold would clash too much with the city's natural red surroundings. The teams agreed on a turquoise blue, a huge flip from its iconic logo, but the rest is history.

Although the infamous Roswell UFO incident of 1947 took place some 75-miles out of the city, that hasn't stopped believers from flocking to the southeastern destination.

When building the city's McDonald's in the 1990s, the fast-food company went above and beyond to create a place that was on-brand for the location. It's not just the architecture that follows an extraterrestrial theme: the art and murals within the restaurant's galactic motif.

You can visit the Hamburger University at the chain's global headquarters

If you're ever in Chicago, make sure to add the chain's global headquarters to your itinerary and get a taste of the most popular menu items from around the world. The university is a real school where students can focus on leadership and development. It's even more difficult to get accepted to than Harvard.

The fanciest McDonald's is in Ohio

This McDonald's in Independence, Ohio, trades golden arches and playrooms for with grand chandeliers and cascading staircases.

Only two states are home to over 1,000 McDonald's

California and Texas have the most McDonald's in the country, with California home to 1,286 and Texas home to 1,189. Florida comes in third, with 907.

You can get lobster at McDonald's in Maine

When in Maine! The McDonald's in Freeport used to be the state's only McDonald's, but now there are 62. Seafood lovers can even add lobster rolls to their orders.

The oldest McDonald's in the world dates back 66 years

California is home to 1,286 McDonald's, the most in the country, including the oldest location!

The McDonald's at 10207 Lakewood Blvd., in Downey, was built back in 1953. From a fishbowl kitchen to a single arch "Speedee" sign, it's been unchanged from the day it opened almost seven decades ago.

You can step back in time with this McDonald's in Massachusetts

This New York McDonald's is the most charming

Fans of the chain go wild over this McDonald's located off of Jericho Turnpike for its charming and Southern-inspired architecture, complete with an elongated porch and shuttered windows.

All aboard the McDonald's in Barstow, California! The restaurant is home to a few more culinary tenants at Barstow Station, which is built out of 16-strung together train cars. Customers can dine in passenger train cars, which seem to have quite the following on Instagram.

The state with the least amount of McDonald's is...

North Dakota is home to the fewest amount of McDonald's in the country, with 25 locations. Vermont is home to 26, Washington, D.C. to 27, Wyoming to 29 and South Dakota to 30.

But there's one McDonald's that was forced to forgo its iconic yellow arches during its construction in 1993.

Sedona, Arizona, is known for its scenic landscape, red rocks and desert resorts — and city officials weren't happy with the interference the chain's bright colors would bring for its aesthetics. So, city representatives pushed back on its construction, and McDonald's ended up changing its iconic arches from gold to teal blue.

The vibrant creations have become a must-see for Sedona's tourists, many of whom add the location to their itinerary in between desert hikes and spa treatments.

But the southwestern state isn't the only place that's home to an unusual McDonald's. In fact, the country is packed with eccentrically-designed locations that showcase the chain's six-decade history. Take Independence, Ohio, which is home to the "Fancy" McDonald's for its ornate chandeliers and cascading staircases. Or the one in Roswell, N.M., which is built like a UFO and in Barstow, Calif., where the restaurant is built like a train.

Of course, these locations may not look like your regular Mickey D's, but each is branded with the chain's iconic logo and home to its signature menu. Take a look at some of the wildest locations in the slideshow above!

More from Aol.com:
Inside look at Melania Trump's daily diet, including her favorite meal
One kind of food is responsible for 50 percent of all foodborne illnesses -- and it's not raw meat
17 healthy foods that are actually dangerous to overeat