11 best July 4th celebrations across the US 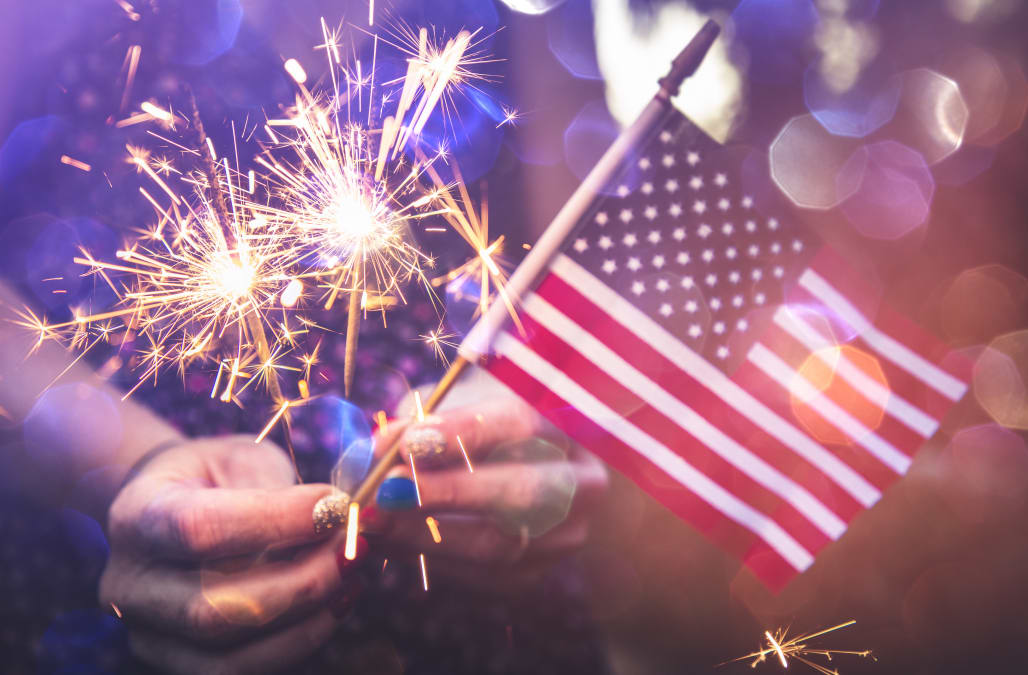 There's nothing as essential for the Fourth of July as hot dogs, a cold beer and an epic and deafening fireworks display.

And while we can assure you that your family's backyard get-together is most likely the hottest on the block, there are some July 4th celebrations that are, quite frankly, better than others. One Rhode Island town's annual celebration sees eight times as many visitors during the holiday as its normal resident count; there's a reason it's called the "Most Patriotic Town in America."

The town of Bristol may only have a population of under 23,000, but it's known country-wide for its Fourth of July celebrations and has earned the impressive title of "America's most patriotic town."

In fact, the New England charmer is home to the oldest Foruth of July parade in the United States. Founded in 1785 by Rev. Henry Wight, who was also a veteran of the Revolutionary War, the celebration has gone on to attract over 200,000 people for its annual "The Military, Civic and Firemen’s Parade."

The Dallas suburb regularly makes it onto the list of the most spectacular firework shows in the United States. The show, aptly named "Kaboom Town," is held on July 3rd and can be seen anywhere from the 13,000-resident town.

All of the town's 23 hotels sell out in anticipation of the event, which features 3500 pounds of fireworks and a $300K price tag.

Titled "Big Bay Boom," it expands from Point Loma to Shelter Island to the Coronado Ferry Landing and will bring together visitors and residents for an 18-minute choreographed show filled with pyrotechnics and the most "technically advanced" displays.

Nothing says 'Merica like a hot dog eating contest, specifically one most historic to the East Coast food scene. For 102 years, Nathan's has been putting on its iconic International Hot Dog Eating Contest, which sees contestants compete for prize money by stuffing their faces with over 70 hotdogs.

Fireworks are included, but the hot dog contest is the main attraction of this Brooklyn staple.

You probably don't get more off-the-beaten-path than South Dakota, but the midwestern state is home to a very unique and historic Fourth of July Celebration.

Every year, residents of the small town gather for patriotic celebrations above the Homestake Mine, which used to be the largest and deepest gold mine in North America until it closed in 2002. The mine produced more than 1.25 million kilograms of gold and though closed, continues to remain a historic site for South Dakotans.

There's a reason the southern gem's July 4th celebrations have been included by leading travel publications. The event comes at no cost to spectators, but features an impressive lineup of country music stars, like Brett Eldredge and Mac McAnally, for their "Let Freedom Sing" concert. The evening then culminates in a spectacular and ear-popping fireworks show with over 1000 fireworks and 200,000 attendees.

Guests have the ability to celebrate the Fourth of July in one of the most historic cities in America. Furthermore, spectators can spend the holiday aboard one of the most significant warships in American history, the USS Yorktown. The carrier was built in 1941 and was the tenth to serve in the United States Navy. It now remains the "centerpiece" of the city's beloved Patriots Point Naval and Maritime Museum.

The "Lights on the Lake" celebrations in Lake Tahoe make for some of the country's most scenic and entrancing patriotic displays during the holiday. Bringing together over 125,000 visitors for a 25-minute display, the show will feature both patriotic bursts and fireworks in the form of smiley faces and butterflies.

Over 200,000 people take over the shores of Lake Minnetonka for one of the area's most exciting events of the year. The annual patriotic evening, which was established in 1853, kicks off with its signature Firecracker Run followed by a spectacular fireworks display worth over $100K. For the first time, guests can experience the show from the top of the Ferris Wheel, which will provide the ultimate view of the festivities.

The biggest Fourth of July festival takes place in one of the oldest and most historic cities in America. Boston's celebrations have brought in 14 million people in the past 40 years for its annual celebrations for a 5-day celebration full of Revolutionary War reenactments, speeches, and cruises around Boston Harbor. Of course, the festivities end with fireworks and churchbell rings.

What better way to celebrate America's independence in the City of Brotherly love, home to the Declaration of Independence and the Constitution? The annual Wawa Welcome America concert takes over the Benjamin Franklin Parkway (yes, everything is revolutionary-tied) with a spectacular performance by Jennifer Hudson and Meghan Trainor. Two light shows take place over the Deleware River, as do three fireworks displays, and 50 activities over the 6-day event.

Consider yourself lucky if you live near one of these patriotic destinations -- if not, you might want to consider a last-minute road trip to check out the most incredible July 4th celebrations in the United States. From Lake Tahoe to Lake Minnetonka, a Dallas suburb to the City of Brotherly Love, ring in America's birthday at one of these hotspots.

Scroll through above to see which places made our list.

Related: Show your pride with these outfits

More from Aol.com:
Universal Orlando's most affordable resort hotel features an under-$10 cocktail menu
Flight attendants share 15 of their favorite travel hacks
Here’s how to get picked for an upgrade on a flight

Save up to 50% on The North Face at Backcountry

Get up to 50 percent off on Adidas