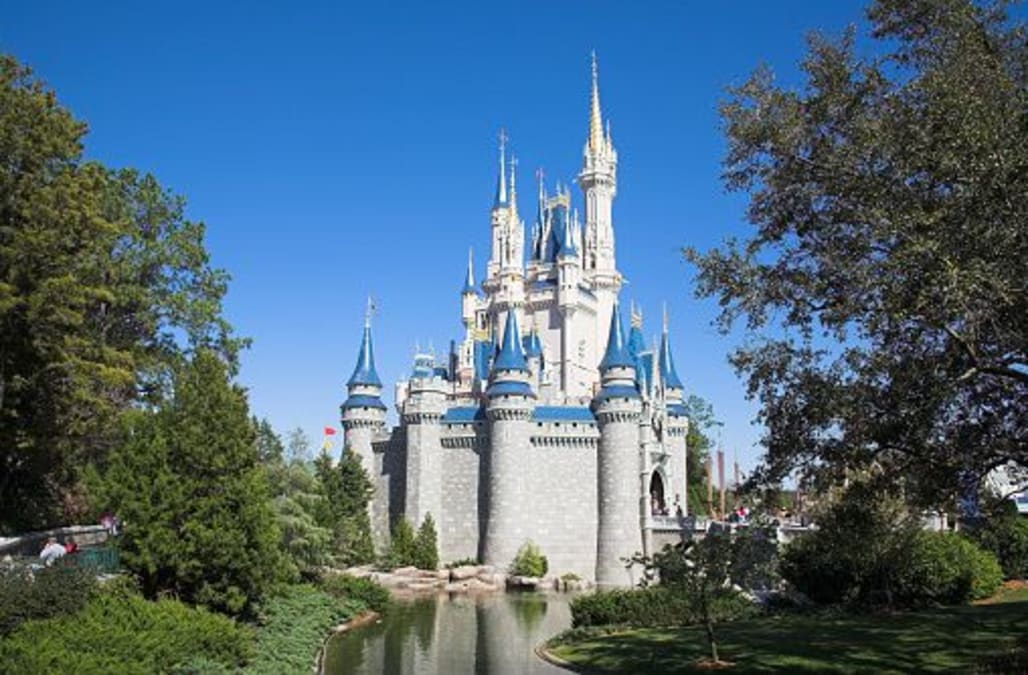 When you think of food at Disney World, you probably imagine yummy Mickey Mouse-shaped waffles, international snacks and drinks from Epcot’s World Showcase, and those huge, indulgent turkey legs. But the park also has its share of elegant, delicious sit-down dining experiences, too—some of which you might have to reserve months in advance.

If you’re a Disney aficionado, you may have heard of Club 33, the ultra-elite Disneyland restaurant open only to members and people specifically invited by one. (If you haven’t, learn about its storied history here!) Luckily, Disneyland’s Floridian companion doesn’t have a restaurant that’s quite that hard to get into. But if your Disney World plans include dinner at Victoria & Albert’s, you might want to start making reservations several months in advance—at the latest. 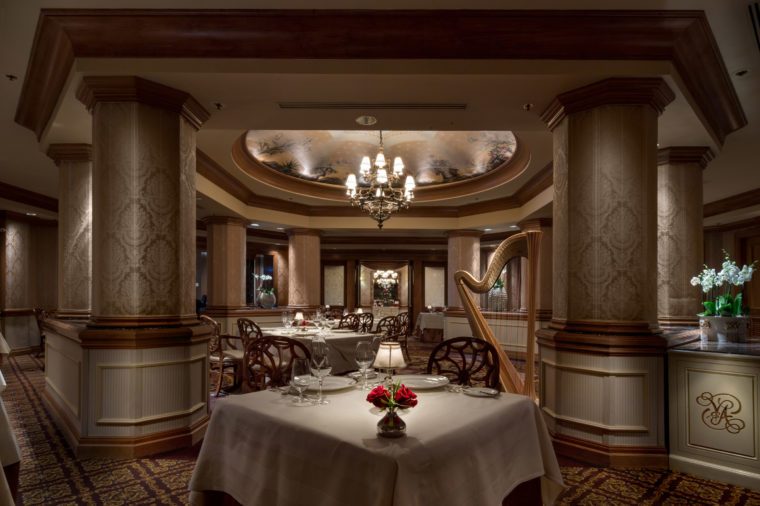 Victoria & Albert‘s is the only five-star dining establishment in the whole park, which is a big part of the reason seats there are in such high demand. You’ll find this regal restaurant in the Grand Floridian Resort & Spa (though you don’t have to be a resort guest to dine there). While princesses and princes might be the stars of the Disney parks, at Victoria & Albert’s, you’ll eat like a king or queen! “From the minute you walk in the door, you’re treated like a member of the royal family; you’re treated like a VIP,” says Christoper Lucas, author of Top Disney: 100 Top Ten Lists of the Best of Disney, from the Man to the Mouse and Beyond. As a matter of fact, Lucas believes that Victoria & Albert’s is a more worthwhile experience than Club 33! 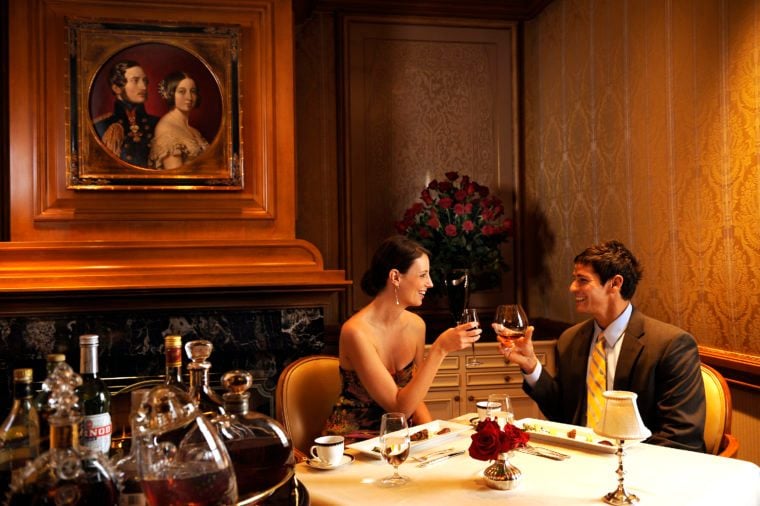 So, what makes Victoria & Albert’s a Disney diner’s dream come true? Well, the menu is customized to you, personally. That’s right—after you call up and make your reservation, the restaurant follows up with you, sending you a checklist where you indicate your food preferences and any dietary restrictions.

Once you arrive, you’ll get to anticipate your prix fixe meal with a personalized menu. “It has your name printed on it, and you get to take it home,” Lucas details. The food itself will be served in a whopping eight separate courses, from an amuse-bouche to tasty truffles for dessert (with bread in the middle to cleanse your palate). Lucas says that the specific foods change daily, but you can expect poultry, meat, fish, and a vegetarian selection; it varies based on what the diners choose. In addition, “their wine menu is almost like the telephone book,” Lucas teases. Lucas admits that it is pricey—”almost $200 per person”—but that “you’re getting your money’s worth and more” with the personal experience. Check out some more insider secrets from a Disney super-fan. 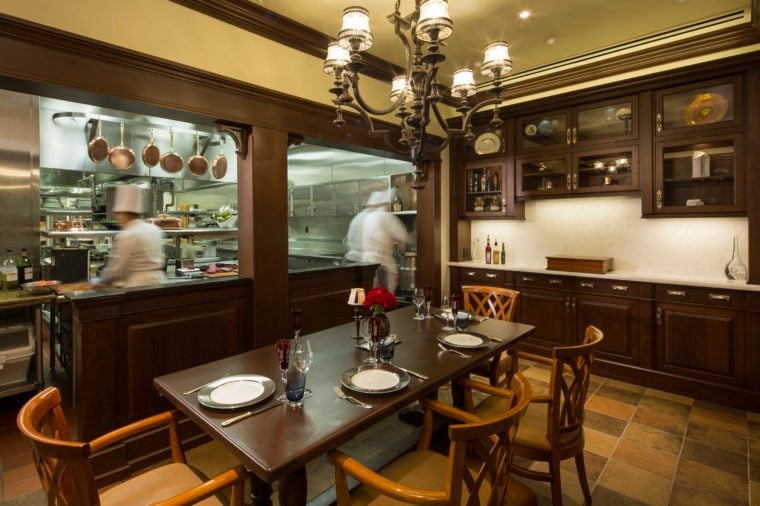 Victoria & Albert’s has three separate dining rooms, one of which, the Chef’s Table, is the pinnacle of Disney dining experiences. It only serves ten people a night, and those lucky people get to sit in the room with the chef and watch him or her prepare the meal. “It’s one of the most interactive experiences at Disney,” Lucas raves—which, as you know if you’ve ever been to one of the parks, is saying a lot!

So, if you want to dine like royalty while at the Happiest Place on Earth, how early should you make a reservation? Well, Lucas recommends calling a full year in advance if you want a place at the Chef’s Table. For the rest of Victoria & Albert’s, he suggests making the call three to six months in advance. And, if you’re bringing your little ones to Disney, keep in mind that all diners must be at least two years old. If you decide to indulge at a meal at Victoria & Albert’s, you’ll be looking to balance it out with these ways to save serious money on your Disney trip.

Every product is independently selected by our editors. If you buy something through our links, we may earn an affiliate commission.

The post This Is the Hardest Restaurant to Get Reservations for at Disney World appeared first on Reader's Digest.

Join Disney's Mickey and Minnie for new surprises in the Magic Kingdom. Sign the Celebration Guest Book and meet the duo (in their new party outfits!) for a picture inside the Town Square Theater. Then join them outside in front of the castle for their new Move It! Shake It! MousekeDance It! Street Party.

Choreographer Cindy Wilson told the Disney Parks Blog, “The ‘Move It! Shake It! MousekeDance It!’ Street Party is a throwback to the Mickey Mouse Club, with wonderful music that everybody’s going to want to get up and dance to, and it’s contemporary at the same time. I think when [the characters] all come off the floats, guests are going to want to just jump in.”

Disney is celebrating the 25th anniversary of "The Lion King" with a Hakuna Matata Time Dance Party hosted by Timon and Rafiki on Discovery Island in the Animal Kingdom.

Meet The Incredibles at Pixar Place

At the start of 2019, Pixar Place at Disney's Hollywood Studios transformed into a Municiberg city block. The park features a party for Mr. Incredible, Mrs. Incredible and Frozone to honor their victories and a meet-and-greet with Edna Mode and her best creations. In addition, guests can look throughout Pixar Place for clues on where to find the youngest member of the Incredible family, Jack-Jack.

Lightning McQueen's Racing Academy is a new show using high tech screens. Guests (rookie racers) will learn the rules of the road from "Cars" star Lightning McQueen. There will also be a new character meet-and-greet with Cruz Ramirez.

The Wonderful World of Animation is a new projection light show that will take place at Disney's Hollywood Studios. The show will take guests on a journey through more than 90 years of Disney and Pixar animations with favorites including "The Incredibles," "Coco," "Sleeping Beauty" and more.

Epcot is opening a new space-themed restaurant called Space 220. According to Disney Food Blog, the restaurant will showcase simulate space views while guests sit in a restaurant modeled after a space station. It will seat more than 350 guests, those of which will be "transported" to the restaurant by elevators covered in digital screens that will mock a trip to space.

A job posting seeking staff for the restaurant lists April 2019 as when applicants can join the cast, so we can assume this restaurant will be open by summer.

Both Disney World and Disneyland will be opening a Star Wars: Galaxy's Edge. The park is being made to look like the planet of Batuu, which is a remote outpost that was once a busy crossroads along the old sub-lightspeed trade routes and is now a safe haven for those avoiding the First Order.

There will be two main attractions where guests can fly the Millennium Falcon and another that puts guests in a Star Destroyer in a battle between the First Order and the Resistance.

Other fun additions will include Luke Skywalker's blue milk, a marketplace and toys, apparel and characters like BB-8 and Chewbacca.

If you like taking the monorail into the parks, you'll want to check out the new Skyliner Gondolas. Similar to a lift you'd find at a ski resort, the gondolas will take guests through two parks, offering spectacular views.

For more on the Skyliner Gondola system, see here.

The new Disney Riviera Resort hotel is inspired by the "grandeur of Europe." It will have transportation to the parks, a fitness center, a rooftop restaurant and wide range of room sizes.

The Riviera Pool, a family-friendly pool, will be decorated with stucco façades, a slide that winds around a column tower (pictured) and a kids interactive water play area that slightly mimics the public fountains of Europe.

While there's no set opening date yet for Mickey & Minnie's Runaway Railway, their first ride attraction, it's set to open sometime this year. The ride will begin with guests viewing a new cartoon short with the mice getting ready for a picnic As Mickey and Minnie are leaving, they drive alongside a train where they see that Goofy is the engineer and the ride takes off from there.

There isn't a whole lot of additional information, but according to the Disney Parks Blog, "Imagineers have been hard at work creating Mickey & Minnie’s Runaway Railway at Disney’s Hollywood Studios, using breakthrough technology to transform a two-dimensional cartoon into an amazing real-world experience."

Epcot's famous IllumiNations: Reflections of Earth nighttime lights and fireworks show is sadly ending at the end of Summer 2019, but will be temporarily replaced with a show called Epcot Forever. The new show will feature classic Epcot tunes, combining music with fireworks, lighting, lasers and special effects kites.

Then, keep an eye out, because in 2020 Disney is gearing up to replace Epcot Forever with a new nighttime show called A Celebration of Disney Music with floating set pieces, custom-LED panels, fountains, lights, fire and lasers.