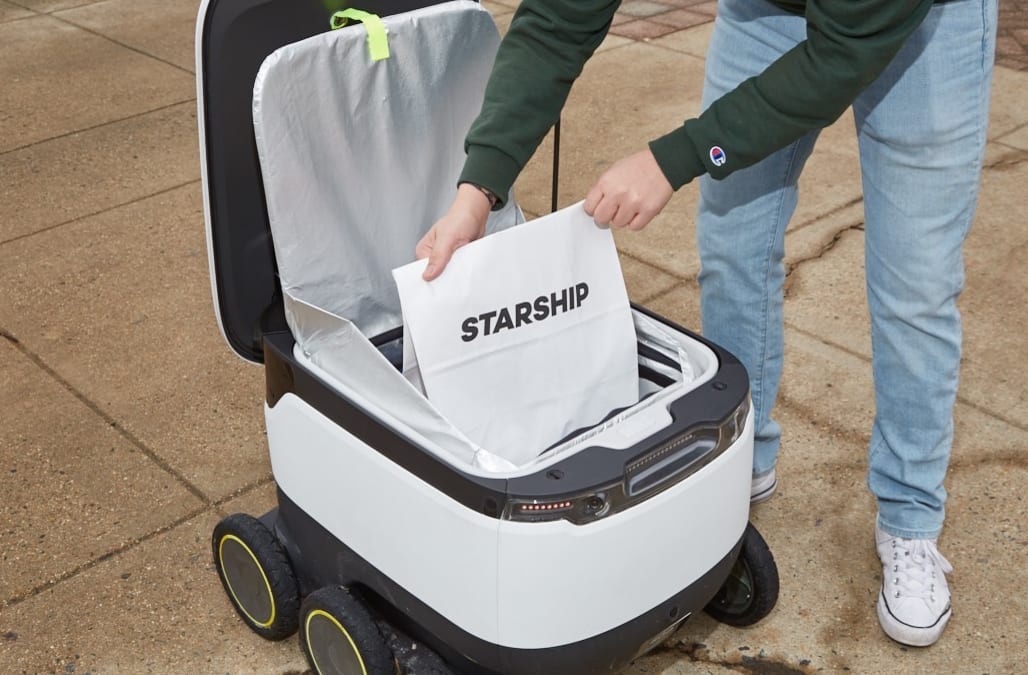 Food delivery has really taken off in the past decade, thanks, for the most part, to millennials. According to a report released last year called "Is the Kitchen Dead?" by investment bank UBS, millennials are three times more likely to order in than their parents. They also found that food delivery apps are generally in the top 40 most downloaded apps in major markets.

Today, you can get almost anything delivered. And now, students at George Mason University located in Fairfax, Virginia can get food delivered by a new fleet of 25 robots.

Food-delivering robots by Starship Technologies
Up Next

Starship Technologies worked with Sodexo, a company that manages dining at the college, to launch the robots on campus on January 22. So far, three retailers have signed on to participate — Blaze Pizza, Starbucks and Dunkin' Donuts — with more expected in the coming weeks.

Here's how the delivery process works: First, students download and open the Starship Deliveries app and choose their order. Then, they drop a pin where they want their delivery to be sent. That means they can have it sent to places without an exact address, like the grassy quad where they're planning to eat with friends, or any place where cars can't go. Students can track the robot's progress and once it arrives, will receive an alert to meet the robot and unlock it through the app.

Each delivery costs a fee of $1.99, but works with students' meal plans. The robots can carry up to 20 pounds of food too, so a whole study group (or small party) can order together. Deliveries are expected to take 15 minutes or less, depending on the size of the order.

"It's very hard to get in with cars [on-campus], so this process is a huge benefit to the students," Jeff McKinley, Sodexo’s District Manager for George Mason University, said. "They can sit at any bench or building and continue their work on class and wait for the product or their meal to come straight to them — they don't have to interrupt their studying."

According to a press release, "The robots use sophisticated machine learning, artificial intelligence, and arrays of sensors to seamlessly travel on sidewalks and navigate around obstacles." They can cross streets, curbs, travel at night and through rain and snow. When they start to lose charge, the robots have PODs (like mini dog houses) where their batteries are automatically switched so they can keep working, no humans involved.

The Washington Post notes that Starship Technology launched a pilot program with the robots last year in Washington D.C. and Redwood, California to deliver meals from local restaurants. In the UK, the robots are used to deliver packages. And although robots from similar brands have been delivering food to students at UC Berkley and University of the Pacific (with some issues), George Mason is the first to incorporate it into its meal plan and to use Starship Technologies.

"Our goal is to make life a little bit easier for students, whether that means skipping the line, eating lunch on the lawn rather than in the cafe, or finding the time to eat better when studying for exams," Ryan Tuohy, SVP, Business Development, Starship Technologies said.

Mason student Jenna Dayton added, “The [restaurant and dining hall] lines can get long in between classes, and once you get a table at the library, you don’t want to give it up. Not only will this make my life easier as a student, but I’m going to get a visit from a robot!”

More from Aol.com:
Meghan Markle is still a fan of this royally popular food
27 keto snacks to help you stick to your goals
Perdue recalls chicken nuggets due to possible contamination with pieces of wood

6 types of cocktail glasses and why they're used

Shop Sur La Table cookware for up to 65 percent off