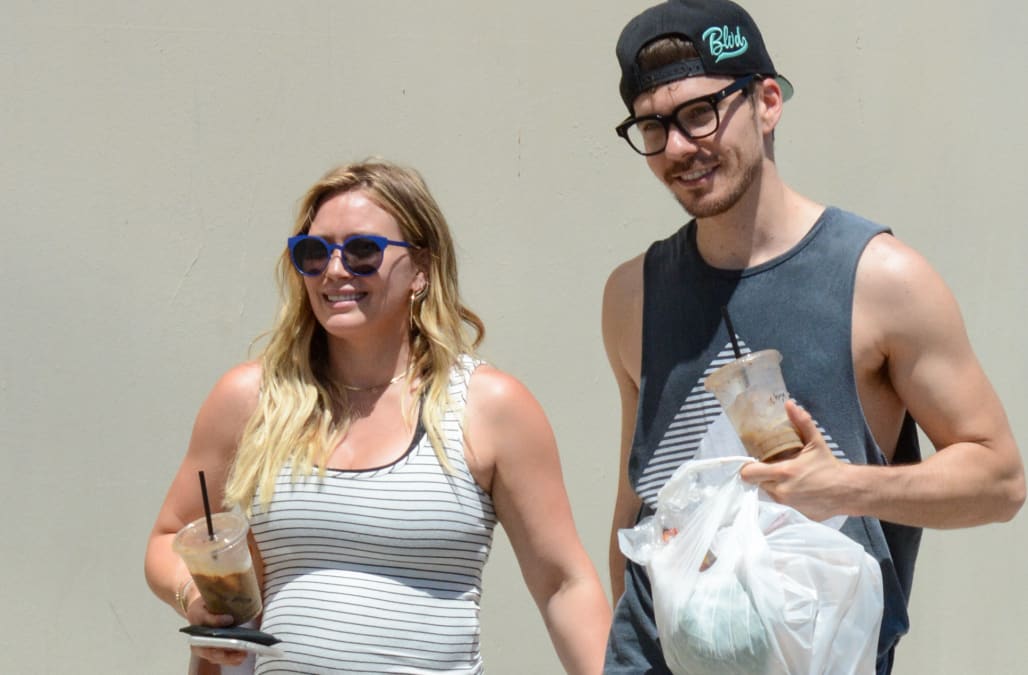 Every day, Studio City's Caioti Pizza Cafe serves around 8 to 12 pregnant women, all of whom have stumbled into the famous eatery in LA in desperate hopes of getting their labor going.

The restaurant, which was established in 1987, has made headlines for "The Maternity Salad."

A simple concoction of romaine, gorgonzola, walnuts, watercress and the restaurant's secret balsamic dressing, the dish has become famous for moms-to-be, many of whom have traveled far and wide for a taste of Caioti's magical mix.

Pregnant women eating "The Salad"
Like many pregnant women in Los Angeles, I made my pilgrimage to The Valley for "The Salad"! 🥗Legend has it that this salad (or rather the dressing) at @caioti_pizza has been known to put you right into labor! I'm not confident that will happen AT ALL but I figured it's an LA rite of passage to give it a whirl! 🤷🏼‍♀️(swipe right for more) #9monthspregnant #babywatch #wereready
There are literally three other pregnant women here with me at this restaurant in Studio City for “The Salad” hoping this does the trick. These chicks are all 39 weeks though. I laugh at 39 weeks. Call me when you hit 41 weeks, girl. 😂
The salad is supposed to help boost labor within 24 hours, it’s been 6 hours since so far and nothing yet 😂🤞🏻
We came to Studio City to eat at Caioti for The THE Salad. A salad famous for inducing labor 💙🙏. We are placing bets on the legitimacy of it. Who thinks baby is coming tonight??
Doing everything I can to get this baby out ...if that means eating a special salad, I’m in!
Went to Caioti Cafe today to try their famous "labor inducing" salad. They say that it's the special, homemade, balsamic dressing that does the trick. Who knows🤷🏼‍♀️ There were 3 other pregnant women in there at the same time as me. On average they serve the salad to 8-12 preggos a day! And they have a guest book to prove it😂 Either way, great marketing ploy for them, and a good way to get me to eat otherwise (currently) very unappetizing vegetables. I got extra dressing on the side to take a shot of later. Hopefully that shot comes with a side of baby 🙌🏻
Trying “The Salad” from Caioti! Come on, girl!!!
Here we have (hopefully) the last picture of pregnant me. Legend has it that most women who try The “The” Salad from Caioti Pizza Cafe in Studio City go into labor either hrs later or some time soon after. Jim and I drove an hr to try said salad after I heard about it from a woman I met in line at a store in the mall, that’s how desperate I am lol. This is my last ditch effort in trying to get my son out on my own before I schedule an induction w my doctor next week. I’ve tried everything over the last few days: teas, baths, massages, birthing balls, walking, knocking boots...so this is it, I’M READY! • • • • #inducedlabor #induction #pregosalad #maternity #pregnantbelly #maternity #pregnancy #40weekspregnant
Ever heard of the labor inducing salad? Me neither. Let’s give it a try 🤰🏼🤷🏼‍♀️ . . . #theTHEsalad #39weeksand6days #duedatetomorrow #pregnancy #momtobe #momsofinstagram #maternity #babygirl #laborinducingsalad #letshaveababy #mypregnancy #labordayweekend
“Maternity Salad” ... hoping this helps!!!! Upside is that I get to hang out w the hubby longer before baby girl comes out 💕 #39wks6days
Trying out this labor inducing salad! Extra shot of dressing for good luck 💙 Come on our baby boy 🤞🏻 . . . . . .#laborinduction #laborsalad #THEsalad #caiotipizzacafe #fingerscrossed #anydaynow #doctorrecommended
Up Next

Some drink the dressing straight from the bottle.

Actress Hilary Duff has joined the thousands of hopeful moms hoping to induce labor. Nine months pregnant with her second child, a girl, Duff has been documenting her pregnancy journey for her 10 million Instagram followers, including her brief stop at Caioti's.

"This salad is supposed to make you go into labor...@caioti_pizza don't let me down," she posted to her Instagram stories. No word yet on if the salad intervention worked.

See more of the child star over the years:

Even LA-area OBGYNs recommend the restaurant to their patients. "Doctors send their patients here — so do midwives and doulas," explained owner of Caioti's Carrie LaDou. "Everybody knows us and the salad has become an end-of-pregnancy tradition for most locals."

Some attest its powers to the enzymes in the dressing, but whether that's true or not, the legend lives on.

"There are now kids that are literally in their twenties who come in and eat and tell us that their mom ate the salad," added LaDou.

Celebrity Babies of 2018
Skin to skin. Our mana. Blessed and proud to bring another strong girl into this world. Tiana Gia Johnson came into this world like a force of nature and Mama @laurenhashianofficial labored and delivered like a true rockstar. I was raised and surrounded by strong, loving women all my life, but after participating in baby Tia’s delivery, it’s hard to express the new level of love, respect and admiration I have for @laurenhashianofficial and all mamas and women out there. Word to the wise gentlemen, it’s critical to be by your lady’s head when she’s delivering, being as supportive as you can.. holding hands, holding legs, whatever you can do. But, if you really want to understand the single most powerful and primal moment life will ever offer - watch your child being born. Its a life changer and the respect and admiration you have for a woman, will forever be boundless. And to my third and youngest daughter, Tiana Gia - like I did when your two older sisters Simone Alexandra and Jasmine Lia were born, you have my word, I’ll love, protect, guide and make ya laugh for the rest of my life. Your crazy dad has many responsibilities and wears many hats in this big ol’ world, but being your dad will always be the one I’m most proud to wear. Oh and one more thing.. you’re gonna love rollin’ in daddy’s pick up truck. #TianaGiaJohnson🌺 #3rdDaughter #BlessesAndGratefulMan #ImInTROUBLE
Banks Violet Bair❤️ this little bit has fully stolen our hearts! She joined our world at home on Thursday afternoon and is absolute magic ✨
My heart ❤️
Mommy’s Little Love
Happy Mother’s Day to my lovely bride! She never has ceased to amaze me with her character and love for our Savior!
The Duke and Duchess of Cambridge are delighted to announce that they have named their son Louis Arthur Charles. The baby will be known as His Royal Highness Prince Louis of Cambridge.
stormi webster 👼🏽
Baby Romeo 💙
guess we’re really doing this kid thing!
The Tin Man, Dorothy and The Scarecrow say hi to the cutest of Munchkins. #BillyandtheRippers
My baby Chi 💕
💝 #WhatAMonth!
🎵 When I wake up in the mornin' love And the sunlight hurts my eyes And there's something without warning, love Bears heavy on my mind Then I look at you And the world's alright with me Just one look at you And I know its gonna be A lovely day A lovely day 🎶 A LOVELY DAY 👶🏾👶🏾👶🏾 We are sleepless and delirious but so excited to share that our miracle baby arrived last night via surrogate and 11/7 will forever be etched in our hearts as the most loveliest of all the lovely days. Welcome to the party sweet girl! #onelastdance #skintoskin @dwyanewade ❤👑🥂 📸 by @awesomeedd
My new normal. I love it. Look at that face! He’s gotten so big already! 😍😭😍😭😍
Loving my morning snuggles with mister Max 💙 Also check out a few of my mommy hacks on the @feed blog (link in bio).
I wanna eat their faces off.
God blessed us 🙏🏻 Dios nos bendijo.
We are so blessed ❤️ Thank you so much to @people for sharing a glimpse into our lives with our new precious addition 👶🏼🎀 Y'all go grab yourselves a copy of the new issue of @people magazine today!! 📸: @studiotranphotography
Sunday staring at him
Dressing Oskar in @huggies Made by You– Huggies’ first-ever personalized diaper. Taking our design obsession one step further, we loved choosing from one of the five fashion inspired collections. To design your own go to link in bio. #MyHuggies
Thanks for making me a mommy, it's the best thing that's ever happened ❤️ @robinthicke
So excited to introduce Marvel Jane Wentz. Feeling so grateful that she’s here... annnnd she’s already ready to takeover the world ❤️🌎 happy Mother’s Day @meagancamper and all the moms out there. We ❤️ you.
Welcome to the world baby Luca! We love all 9lbs, 22 inches of you to pieces! So much love to you @ish_ah for all you do for our family 💙 #MyMainMen #LucaBabcic
All my fellow mommies that deal with MS or anything that causes them to have to make choices they didn’t necessarily want to.. this is for you. I’m having to stop breastfeeding soon so I can get back on meds. The truth is, the toll of two kids and a newborn lifestyle is not the easiest on me.. and I need some help. What sucks is that I live with a disease that makes decisions for me a lot , and with breastfeeding I took SUCH pride that I was able to do something really awesome with this body that I am constantly at war with. This little guys tummy is struggling with the formula, and I KNOW we will both be fine, but I’m emotionally having to deal with the guilt and sadness that is coming along with weaning us both off this magical time. Any advice from my fellow mommies on how this can be any easier ? Xxxxx
When 2 become 3... Welcome Sebastian Piers Williams - aka Baz! Mom, Dad, and Baby are happy, healthy and totally in love! 😍😍😍
Genevieve Upton Verlander 💗 11.7.18
Up Next

More from Aol.com:
Meghan Markle baked banana bread for farmers on royal tour of Australia
Best Bites: Chorizo sage mac and cheese baked in a squash
The gross reason you should never pepper your food in restaurants