13 things you should never eat on an airplane 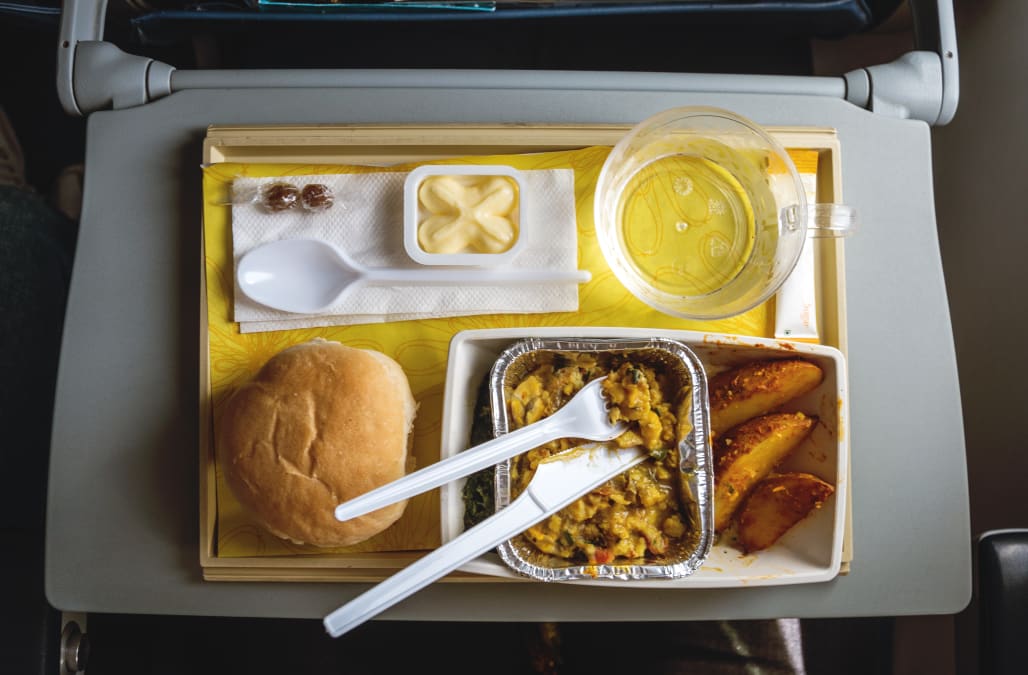 A registered dietitian nutritionist reveals which foods could turn your next flight into a disaster.

13 PHOTOS
Never eat this on an airplane
See Gallery

Never eat this on an airplane

Go easy on your seat mates—that garlic bagel you enjoyed for breakfast might linger through a flight later on. The compound allyl methyl disulfide, one of the culprits contributing to garlic breath, can take up to 24 hours to be removed from your body. Thankfully, Sheryl Barringer, PhD, professor and department chair of food science at Ohio State who co-authored a study on managing the odor (published in the Journal of Food Science) has an easy fix. "Eating foods like a raw apple or mint leaves can help deodorize your breath after eating garlic," she says. You might be all too familiar with garlic breath, but avoid these other surprising foods that give you bad breath before a plane ride.

For individuals who fear flying, drinking alcohol might seem like a way to calm down. Plus, you might think of the start of vacation as an excuse to overindulge—but think twice: Flying by itself is a dehydrating experience, according to the Aerospace Medical Association. Sitting on a cramped flight for more than four hours already increases chance of blood clots in high-risk people, according to the CDC, and dehydration from drinking adds yet another layer of risk. Watch out for 18 more things you shouldn't do on an airplane.

That snack bag of dried apricots seems mighty enticing if no meal is included on your flight. You may live to regret it if you have been newly diagnosed with asthma and aren't particularly familiar with its triggers. Dried fruit can contain sulfites, which could promote an attack, according to research article in the journal Gastroenterology and Hepatology from Bed to Bench. Lower oxygen levels might worsen breathing issues, according to the Aerospace Medical Association. Try these 11 nutritionist-approved tips for eating at airports instead.

Grabbing a Venti dark roast on your way to the gate is a common habit. But that cup of coffee delivers 410 milligrams of caffeine. Two hours into the flight, you'll have annoyed your neighbors with several bathroom trips and restlessness. A 2017 studyin the journal Frontiers in Nutrition found that 6 milligrams caffeine per kilogram of body weight (408 milligrams for a 150-pound person) can act like a diuretic, leading to fluid, sodium, and potassium loss. This caffeine jolt could also result in symptoms such as headaches or muscle cramps, warns the Mayo Clinic. Plus, flight attendants warn about this gross thing lurking in airplane coffee.

Skip the Cobb salad on the in-flight menu—blue cheese can be a problem for someone with a milk allergy. The last place you want to find out if you'll react is at 35,000 feet. The cabin is pressurized, but the environment is still similar to the air at the 6,000- to 8,0000-foot altitude. Those lower oxygen levels mean individuals with respiratory ailments are especially vulnerable, according to the Aerospace Medical Association. Plus, tummy-related symptoms could be an even bigger problem if turbulence is keeping you in your seat and away from the bathroom.

Peanuts are a handy snack, but you'll be going hungry if the flight attendant announces that someone on board has a severe nut allergy. Because the plane recycles a percentage of cabin air, opening your bag of nuts could expose the allergic person. How airlines handle the issue varies—Allergy Safe Travel provides links to various airline policies. For example, your nuts could be OK on Jet Blue Airline, which tries to discretely create a nut-free buffer zone the row in front of and behind the allergic passenger.

Sure, airlines dole out H2O in bottles, but their coffee and tea are made with tap water—and you might want to wait on those until you land. The Aircraft Drinking Water Rule of 2009 requires airlines to inspect their water transit systems for E. coli at least every five years, which leaves an uncomfortable amount of room for error. Sure enough, a 2015 study in the International Journal of Environmental Research and Public Health found that water on the two planes it tested contained bacteria known to cause disease. Carry your own water bottle, and fill it after you get past security—and before you board.

That salami sandwich you grabbed while waiting at the airport may come back to haunt you during your flight. Salami is considered a high-histamine food, according to an American Journal of Clinical Nutrition article. In those who are sensitive to histamines, eating it could aggravate nasal allergies or sinusitis, making lift-off and landing a congestive nightmare. Next time, choose the turkey sandwich.

Get this: The Aerospace Medical Association reveals that the change in cabin pressure can cause gas in your intestines to expand up to 25 percent. Those fiber-rich legumes give you gas on the ground—imagine what they can do to you (and your unwitting seat mates) once you hit cruising altitude. Plus, the abdominal crowding will make you even more uncomfortable if you're pregnant. Avoid the black bean burrito before you board, and maybe skip any beans on the side of your in-flight meal. Here are other 11 more weird ways that flying alters your body.

Hit the brakes on that fast-food breakfast sandwich. The USDA lists biscuits with egg and ham as the worst fast-food item for sodium content. At 1,989 milligrams, one sandwich happens to be 86 percent of the recommended daily 2,300 milligrams of sodium. All that sodium can boost blood pressure, according to the American Heart Association, which is especially concerning when the flight's low oxygen puts additional strain on your heart. Stick to fruit and yogurt or other low-salt options.

Lower oxygen levels can make flying particularly trying for individuals with lung disorders. A study in the European Respiratory Journal found that 18 percent of passengers with lung disease had at least mild respiratory distress during a flight. To make matters worse, gas expansion at high altitudes can increase pressure on your lungs. The Aerospace Medical Association recommends avoiding carbonated beverages, which could increase in gas formation and compromise breathing. Stick to water to keep you hydrated and reduce gas production.

Picture this: You're in your seat with your bag of butter-flavored popcorn ready to watch a movie when the plane hits an unexpected turbulent patch. The bag goes flying, covering you and your neighbors in popcorn kernels. Even if you avoid this embarrassing scenario, you'll have buttery fingers, a rustling package, and a strong, buttery smell for everyone around you. And if the fiber results in flatulence, you'll realize perhaps some trail mix or healthy chips might be a better option. Check out these 13 things your flight attendant won't tell you.

When we think about caffeine we usually think coffee, but dark chocolate can pack a caffeine punch. A 3.5-ounce bar of 85 percent cacao has about 80 milligrams caffeine alone, and chocolate-covered espresso beans contain as much as 336 milligrams per serving, according to the USDA. You won't like that if turbulence makes you anxious. Find out why you should avoid eating airplane food entirely.

The post 13 Things You Should Never Eat on an Airplane appeared first on Reader's Digest.

More from Reader's Digest:
18 secrets Disney cruise line employees won’t tell you
This little-known rule lets you cancel any flight for free
15 things you should never, ever do in a hotel room