10 cooking tricks that are only taught in culinary schools 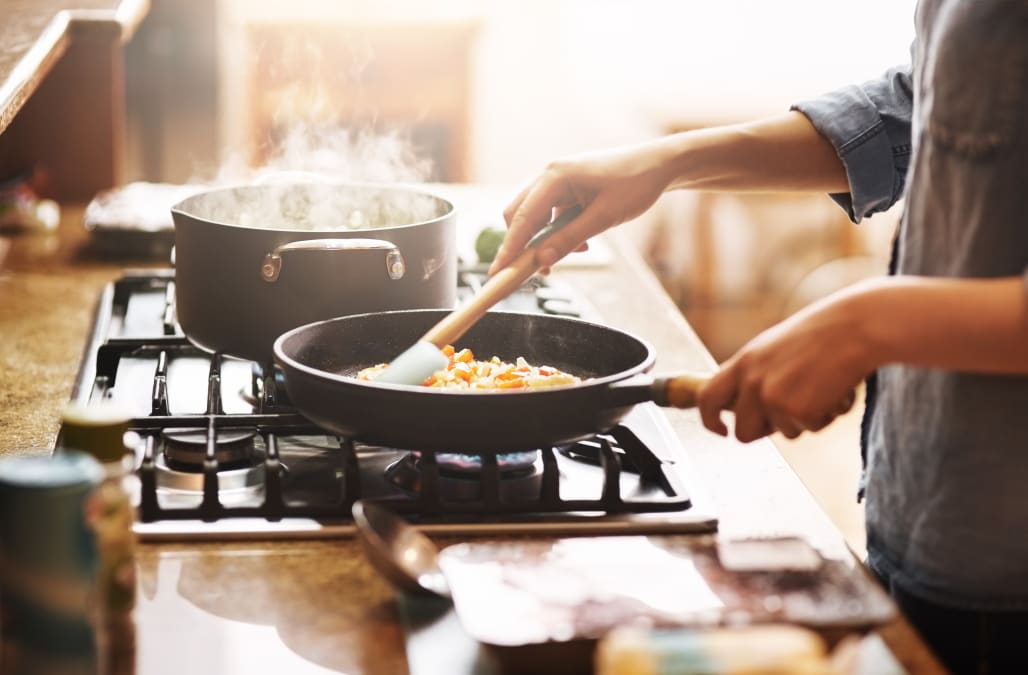 Cooking like the pros is easier than you think!

How to get the perfect steak

If you're one of the many people who takes a piece of meat out of the refrigerator or freezer and throws it directly on the grill, it's time to learn the error of your ways. For the best-tasting steak, you're much better off taking it out of the cold and letting it sit for an hour or two before bringing the heat. If you start cooking the steak when it's already at room temperature, it will cook much more evenly. Yes, it'll take longer, but the difference is worth it! Check out 10 more brilliantly simple cooking tips from a celebrity chef.

How to get delicious juicy meat

How are restaurant chefs able to get their chicken and pork chops to have that perfect delicious amount of juiciness? The answer is (fairly) simple: they brine it. Nope, brining's not just for turkeys! Soaking the meat in cold salt water infuses it with rich flavor and a juicy texture even before you cook it. Brining also helps keep your chicken or pork from drying out and provides a safeguard against overcooking.

Don't be scared of salt

Culinary students learn pretty quickly not to be stingy with the salt. "For the first several months of school, I kept getting docked for serving under-seasoned food," Culinary Institute of America graduate Jesse Szewczyk told BuzzFeed. If your food tastes bland, there's a good chance it just needs more salt. If you're hesitant to ramp up your salt addition, use this trick to avoid over-salting: garnish your creation with salt continuously as you cook, rather than salting it heavily at the beginning and/or the end. Sprinkle the salt from up high so that it will be evenly distributed throughout your dish.

It's not just for baked goods anymore. If you add a pinch (or three) of sugar to a recipe that uses tomatoes, you'll notice a delicious difference. The sugar counteracts the natural sour taste of the tomatoes to create a rich, pleasant flavor. Szewczyk even noticed that adding a bit of sugar to a dish he was making with slightly out-of-season tomatoes made it "taste like it was made with perfectly ripe ones." There's a great way to salvage some extra tomatoes. Here are 9 more ingenious ways to use leftovers and cut back on food waste.

How to produce a perfectly-shaped burger patty

This super-simple tip will help you step up your hamburger game—and it takes less than ten seconds. First, toss the patty down hard on your cutting board to force out the air bubbles. Then, press an indent into the center of the patty. These two simple actions prevent the patty from puffing up in the middle and create a nice, even burger. They also keep the burger from bubbling while you cook it.

How to prepare a clear broth

The trick to making the clearest—and tastiest—chicken broth involves lots of chicken and lots of patience. Take your chicken meat—and bones, if you're using them—and cook them in a small amount of water (just enough to cover them) for at least three hours. Cook on a low heat, and make sure to skim off any suds that float to the top. This will make the stock clearer and tastier. Don't add your vegetables right away, wait to add them after about an hour and a half to two hours. For the clearest broth possible, strain the liquid through cheesecloth.

What do pasta dishes, pizzas, fish dishes, and meat dishes all have in common? Well, aside from being super delicious, they can all be enhanced with a dollop of olive oil. Many professional chefs, including Brooklyn Kitchen culinary instructor Sydney Willcox, top off nearly all of their dishes with a sprinkling of this liquid gold. Make sure you're using a good quality extra virgin olive oil, which will add a flavorful kick and "make for a silky finish," Willcox promised StyleCaster. Heads up: Make sure you're not making any of these 50 kitchen mistakes.

How to cook perfectly crusted fish

One word: heat. You can't produce a perfectly seared piece of fish without a piping hot pan. "If you are looking for a sear, you need to bring on high levels of heat," says Willcox. Willcox also warns against overcrowding the pan while searing; that could seriously diminish the heat and prevent your fish from developing that succulent brown crust. Keeping the pan nice and hot also prevents bits of the fish from sticking to the pan when you flip it over; when cold, the proteins in the fish are more likely to adhere to the metal. Here are 9 more ways you've been cooking fish wrong.

The only reason to use nonstick pans

They sound good in theory, but nonstick pans really aren't going to produce the best dishes. If you're cooking anything that you want to develop some kind of crust—think meat or fish—avoid using your nonstick pan. "It’s a different kind of heat, with nonstick pans," New York City chef Amanda Cohen told BuzzFeed. "It’s not quite as hot, it doesn’t get things as crispy since it’s really protecting things from the heat underneath.” The nonstick coating acts as a barrier between the heat and your food, which can prevent it from developing that rich, crispy texture. Don't toss your nonstick pan altogether, though—it's still great for eggs, pancakes, and French toast. Don't miss these 32 other surprising uses for common kitchen gadgets.

How to cook the tastiest pasta

Want restaurant-quality, flavorful pasta no matter what sauce you're tossing it in? Before your pasta is fully cooked, transfer it into the sauce for the last few minutes of cooking. Doing this will help the noodles absorb the flavor and help the sauce cling to them better. If the sauce comes out too thick, add a little bit of the leftover pasta water until it reaches the texture you want. Now, find easy ways to fix 17 common cooking mistakes.