PSA: If you live in these 6 states you might be able to see the Northern Lights tonight 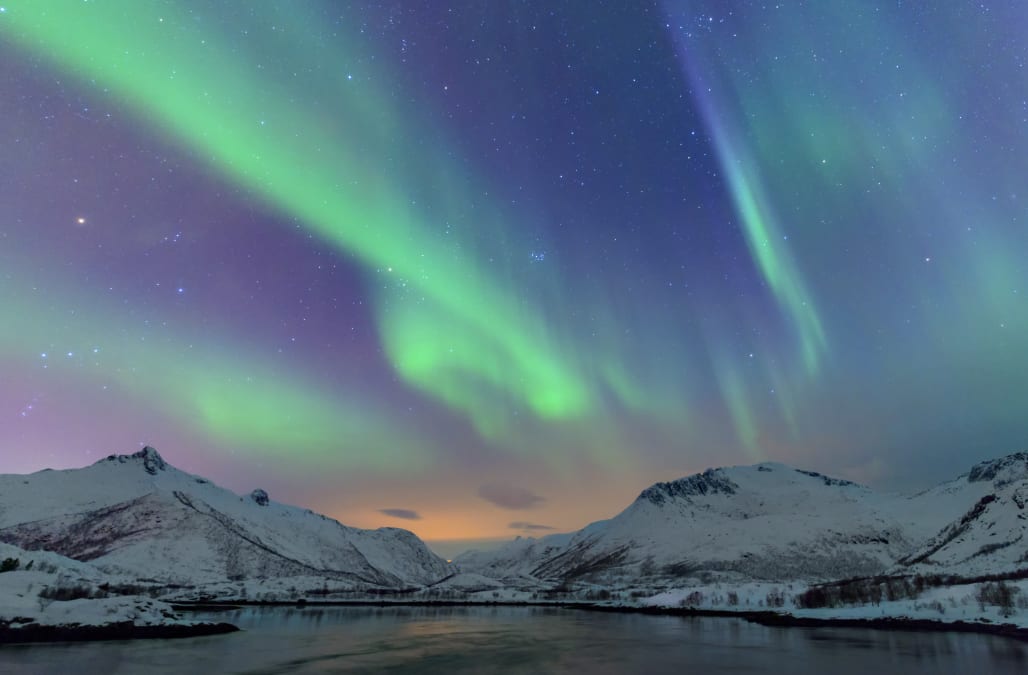 For those who have always watched to catch a view of the Northern Lights, or Aurora Borealis, but can't pop over to Scandinavia, Canada or Alaska anytime soon, you may be in luck. According to multiple national weather agencies the dancing lights will potentially be visible in six states across the U.S. after nightfall on March 14.

Why tonight? A minor solar storm is likely to supercharge and amplify the northern aurora, making them visible to areas they're usually not (aka states in the northern tier of the United States...sorry Florida).

Want to find out when and where you'll have the best chance of spotting the Northern Lights? Check out Aurorasaurus which crowdsources aurora sightings.

RELATED: The 6 Best Places in the World to See the Northern Lights

RELATED: See the Northern Lights on a budget

15 places to see the Northern Lights on a budget
With its far-northern latitude, Alaska is the go-to state for seeing the Northern Lights. Fairbanks lies within the auroral oval -- an oblong area surrounding the North Pole where the auroras are most common -- generally is considered the No. 1 viewing spot. Ester Dome, a mountain west of the city, is unlit at night and offers sweeping sky vistas, no purchase necessary. The Geophysical Institute at the University of Alaska Fairbanks posts daily aurora forecasts, with the best shows from September to April. Budget hotels or B&Bs in the area run about $80 to $150 a night. Rustic, public-use cabins found in state parks are dirt cheap; those in the Fairbanks area cost $35 to $60 a night, and some sleep up to nine people.

About 120 miles southwest of Fairbanks, Denali National Park offers 2.5 million hectares of untouched wilderness. Here the chances of seeing the shimmering auroras are heightened due to the absence of light pollution. In contrast to many other locales, the Northern Lights are most visible here during the autumn months, with sightings often starting as early as August. A $10 fee for individuals and $20 for vehicles allows seven days' access to the park, where a select few campsites are open year-round and charge $22 for standard car camping. A bed costs $32 a night and a two-person room $80 at the Denali Mountain Morning Hostel, but like many lodging options in the area, it's open only from May to September.

The Kola Peninsula, north of the Arctic Circle in Russia, boasts aurora viewing opportunities to rival those of Scandinavia but without anywhere near as many tourists. There are light displays about 200 times a year, some of them lasting for days, particularly during the six dark weeks in December and January when the only light in the sky comes from the Northern Lights. This is the most popular viewing spot in Russia, and budget travel options are more plentiful than in more remote locations. Murmansk, the largest city on the peninsula and in the Arctic Circle, is relatively accessible by flight ($100 to $180) or sleeper train ($40 to $60) from Moscow and St. Petersburg. Budget hotels cost $40 to $100 a night.
Icelandair's stopover program makes this volcanic island an ideal spot for budget travelers intent on seeing the Northern Lights -- book a flight from North America to Europe and add a stopover in Iceland for up to seven days at no extra charge. Prime viewing time is September to April, and the lights are visible even in the capital of Reykjavik on a clear night. Even better is the Golden Circle, a popular loop of viewpoints that starts in the city and covers about 186 miles. Budget travelers should avoid the ubiquitous package tours. Camping is possible anywhere as long as there are no signs prohibiting it. Cheap dorm hostels go for $20 to $40 a night. Iceland is becoming more popular, though, and thus more expensive.
The Idaho Panhandle National Forests cover more than 3 million acres spread through three separate forests -- Coeur d'Alene, St. Joe, and Kaniksu. This wilderness area in the isolated northern stretches of the state is mostly free of pesky, distracting lights. Less than 20 miles from the Canadian border, Priest Lake is especially popular during winter for photographers seeking a snapshot of the auroras, often reflected in the water's still surface. Certain campgrounds are open year-round and charge either $10 a night or no fee at all, while the Blue Diamond Marina & Resort offers lakefront twin rooms for $55 a night from November to April.
The Northern Lights are often obscured by light pollution or cloud cover along British Columbia's coast, but they're frequently seen farther inland in isolated mountain spots like Muncho Lake. The aurora borealis is visible year-round at this jade-colored expanse of water along the Alaska Highway, and the tourism-oriented community near its south shore provides necessary amenities for travelers. Vehicle-accessible campsites charge $20 a night and are open from May to September, while rooms are available year-round for $95 a night at Double G Service or $129 a night at the Northern Rockies Lodge.
The Northern Lights are a common site throughout Canada's rugged Yukon between fall and spring, with many tourism companies offering aurora-themed tours from the capital city of Whitehorse. Visit one of many rental lodges just outside the city to look for the lights, or view them while soaking in the Takhini Hot Springs, which charges only $8 for entry Monday through Wednesday. The Northern Lights Space and Science Centre provides more context on the causes behind the stunning natural phenomenon. The Beez Kneez Bakpakers Hostel boasts the best rates in town: $35 a night for an individual bed or $70 for a private room.
The northern shore of Lake Superior, the largest of the Great Lakes, provides a perfectly dark backdrop for glimpsing the aurora borealis in winter and fall, especially September and October. Find an isolated spot off Highway 17, like the rugged peninsula and tiny community of Silver Islet, where the auroras reflect across the lake in almost any direction. Nearby Thunder Bay provides the most varied lodging options, with standard motel rooms going for as low as $40 a night, or $30 for a single-occupancy room at the Sleeping Giant Guesthouse.
Minnesota's far northeast Cook County, just on the other side of the U.S.-Canada border, is almost entirely wilderness and ideal for aurora viewing from late fall to early spring. Oberg Mountain in the Superior National Forest is a popular spot to see the Northern Lights shimmer, with panoramic views of Oberg Lake, Lake Superior, and many of the region's tallest peaks. Hotels dot Highway 61, the county's main thoroughfare, with standard rates from $60 to $100 a night.
As North America's northernmost metropolitan area, with more than 1 million people, Edmonton is the rare city where the Northern Lights can be seen alongside towering skyscrapers. Visitors are much more likely, however, to see the lights in dark-sky areas outside the city, such as the town of Athabasca, 90 miles north and home to Athabasca University and its Geophysical Observatory, which is devoted to studying the auroras. The Observatory isn't open to the public, so instead visit the isolated snowfields outside the city for a glimpse from December to late February. Motel rooms start at $65 a night in Athabasca and $45 a night in Edmonton.
Glacier National Park in Montana is another of North America's best spots for viewing the Northern Lights, which appear most often in the early morning hours before sunrise from June to August. Lake McDonald and Goat Haunt provide dark skies and open views to the north for viewing the light displays. Diverse lodging options are found near the east and west entrances, while Glacier Park Inc. operates several properties within the park and offers discounted winter rates starting at $79 a night.

Related: 19 of the Most Underrated National Parks in 2015
January is the best time to see the Northern Lights in the United Kingdom, and the odds improve the farther north you go. Wait for a clear night and find a view north along the Caithness coast or elsewhere in northern Scotland using AuroraWatch UK's forecast as a reference. Inverness, a two-hour drive from the northern coast, is a convenient entry point for visitors, given its variety of amenities and accommodation options starting at about $19 for hostels. Similar prices are available in the town of Thurso along the coast.
The Torrance Barrens Night Sky Preserve in Ontario is the closest dark-sky area to Toronto. Urbanites often make the drive about 120 miles to the park to stargaze or watch for the occasional appearance of the aurora borealis, especially September and October but into the winter, as well. Check the clear-sky chart for nights of strong geomagnetic activity before choosing a spot near one of the region's myriad lakes. Find nightly lodging rates starting at $60 throughout the area, with the highest concentration of options in the nearby town of Gravenhurst.
The sparse population in Maine's northern woods makes the Aroostook National Wildlife Refuge a prime location for seeing the Northern Lights outside the Arctic Circle. Sightings occur during spring or fall, when magnetic storm activity is strongest, or in winter when clear night skies are more common. Budget accommodations in nearby Caribou start at $70 a night.
Residents of Michigan's rural Upper Peninsula are frequently treated to aurora displays from the comfort of their backyards. Look for the Northern Lights after midnight just outside Marquette, the region's largest city, or improve your chances by venturing onto the Keweenaw Peninsula, the state's northernmost region. Sightings are most common around the spring and fall equinoxes. Hotels start at $63 a night in Marquette and $77 a night on the Keweenaw Peninsula.
Up Next

This is what to buy on Amazon before Cyber Monday