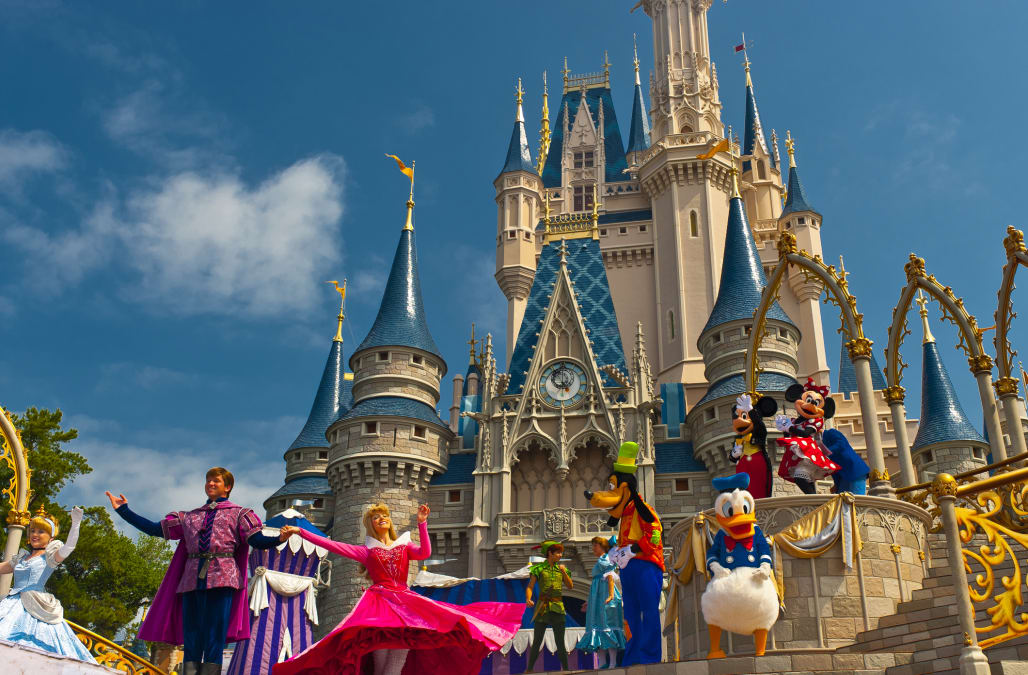 Where fantasy comes to life.

Disney offers so many fun fan experiences, both within its iconic (albeit pricey) theme parks and beyond, that it's sometimes hard to keep track of them all. Do you feel like taking a trip to a galaxy far, far away or venturing to a majestic kingdom full of princesses and talking animals? From informative tours to virtual-reality missions, these unique experiences will be worth the price for Disney enthusiasts.

BECOME A STORMTROOPER FOR A DAY

The Void makes location-based virtual-reality games, where players interact with objects in the real world while seeing a VR skin that plunges them into far-off lands. The Void's Secrets of the Empire recruits players to go on an undercover mission for The Rebellion, snagging important enemy information while incognito as a Stormtrooper. You'll actually walk through the space, touch physical objects, feel temperature changes, and shoot a blaster as you strive to achieve your goals. Though it's $29.95 per ticket for what amounts to 10-15 minutes or so actually in virtual reality, the overall experience is longer. And for Star Wars fans or those curious about what the future of VR holds, it's a must-do. It's available in select cities, including Orlando, Fla., and Anaheim, Calif., and London, with more on the way.

There are four Disney Cruise Line ships: Disney Wonder, Disney Magic, Disney Dream, and Disney Fantasy. The Dream accommodates 4,000 passengers and offers family entertainment by day, including the AquaDuck water coaster, and an adults-only entertainment area by night. According to U.S. News & World Report, a majority of customers reported feeling like the personalized attention from staff made this cruise worth the ticket price. Prices vary depending on the length of the cruise, the season, and other factors. While cruise prices can be steep, there are ways to shave costs.

This is a guided, 3-hour tour available at Disneyland. Each participant is outfitted with an audio device and headphones to hear a knowledgeable guide as they wind you through the park's notable areas that relate to Walt Disney himself, including some areas not typically available to park guests. The tour will clue you in on all sorts of Disney history and trivia, plus it includes lunch, a pin, and, itinerary permitting, access to two rides without waiting in any interminable queues. This add-on is $109 and best serves older children and adult Disney enthusiasts who don't mind a lot of walking.

HOLD THE KEYS TO THE KINGDOM

Disney World offers the Keys of the Kingdom guided tour, where guests will get to explore backstage areas and the underground Utilidors. Like other tours, guests will get an audioguide and headphones to ensure they can hear the guides. The tour is five hours long, featuring history and insider intel. Lunch and a keepsake are included in the $99 per person add-on fee.

Napa Rose, helmed by Chef Andrew Sutton, is the restaurant within the Grand Californian Hotel, meaning you don't have to buy a ticket to the park to dine. You'll get one of 14 exclusive seats and five to seven courses over the course of three hours or so. Every course is tailored to each individual guest's preference, meaning you'll see (and perhaps get to sample, if you're friendly) more courses than you yourself will be served. This special-occasion meal is $100 per person, with an optional wine pairing for $45.

This multi-day, annual fall event at Disney World offers the chance to sample food and drinks from around the globe. Though you will need to pay for the food and beverages you try, access is included with your park admission while the fest is running. Vegetarian and vegan dishes are also available, as are cooking demos, wine tastings, and the Eat to the Beat concert series.

Not to be outdone, Disney California Adventure has its own foodie fest. Park admission grants you access to the festival, where you'll find kiosks offering samples of California beer, wine, and food. Demos from celebrity chefs and gourmet dinners are available at an extra cost.

GO ON A PIRATE ADVENTURE CRUISE

This one's for the kids. For an additional $40 to $50, children 4 to 12 can go on a 2-hour treasure hunt with a swashbuckling guide. Disney World offers three such adventures, each of which involves sailing on a park waterway while hearing an old pirate tale. The adventure includes the pirate booty, should they find it, and a snack.

If you feel like splurging, one of the best-rated add-ons is the Wild Africa Trek, a 3-hour add-on at Disney World's Animal Kingdom. The adventure is split between walking and riding on a safari vehicle though a fictional African village. This allows guests to encounter majestic animals, including hippos and crocodiles, which you can see as you walk across a rope bridge. All guests receive African-inspired snacks and a souvenir photo. The price varies, but is usually about $200 a ticket, and that's on top of your admission into the park.

BE A TIKI GOD AT TRADER SAM'S

Trader Sam's Enchanted Tiki Bar is located in downtown Disney in Anaheim, meaning you don't have to buy a ticket to the park to go. The bar is just as magically themed as the park, and offers a variety of bar food and tiki cocktails. Order the wrong one, and you'll incur the wrath of the gods, resulting in volcanic eruptions or terrible storms.

HAVE A DOLE WHIP

Dole Whips are one of the most popular foods one can enjoy at the resort, consisting of non-dairy soft-serve in pineapple juice. They are both delicious and refreshing. If you happen to be in downtown Disney in Anaheim, you can also stroll over to Coffee House, where you can order a Dole Whip with rum.

DRINK A MANHATTAN AT CARTHAY CIRCLE

While alcohol is not served at Disneyland, it is available at California Adventure. Carthay Circle is one of the park's best dining options, and it also offers a full bar. When you order a Manhattan, it comes served with a perfectly spherical ice cube, made with a special device, which you may get to see in action. It doesn't hurt that the bar is gorgeous, invoking Old Hollywood vibes.

Disney fans frequently arrange to flood the park with similar sartorial choices on select dates. Dapper Day is when guests don mid-century fashions, while Bats Day is for the goths in all back. There's a Tiki Day, as well as Gay Days Anaheim for the LGBTQ community. To participate, you just have to buy a pass for that day and dress your best.

GET YOUR MOUSE EAR LOWERED

The old-timey Harmony Barber Shop is a functioning barber shop located on Main Street in the Magic Kingdom. The staff of smartly dressed licensed cosmetologists offer adult haircuts for $19, kids' dos for $18, and a My First Haircut package with Mickey Ears and a certificate for $25.

Join Cinderella and her princess friends in her picturesque castle for a meal. This Disney World experience can be had for breakfast, lunch, or dinner, but those who choose later seatings will get to see the fireworks from inside the castle. Children are encouraged to dress up for photo ops which character. As a caveat, guests are advised to book a reservation far in advance. Dinner is $73 for adult diners and $43 for children.

More from Cheapism:
24 Most Cringe-Worthy Commercials of All Time
20 Beach Resorts That Cost $150 or Less
20 Reliable Cars You Can Drive Into the Ground

Here’s how to watch Beyoncé's ‘Black Is King' film

10 bargains that are just as good as Prime Day deals

This best-selling facial cleanser is for dry skin