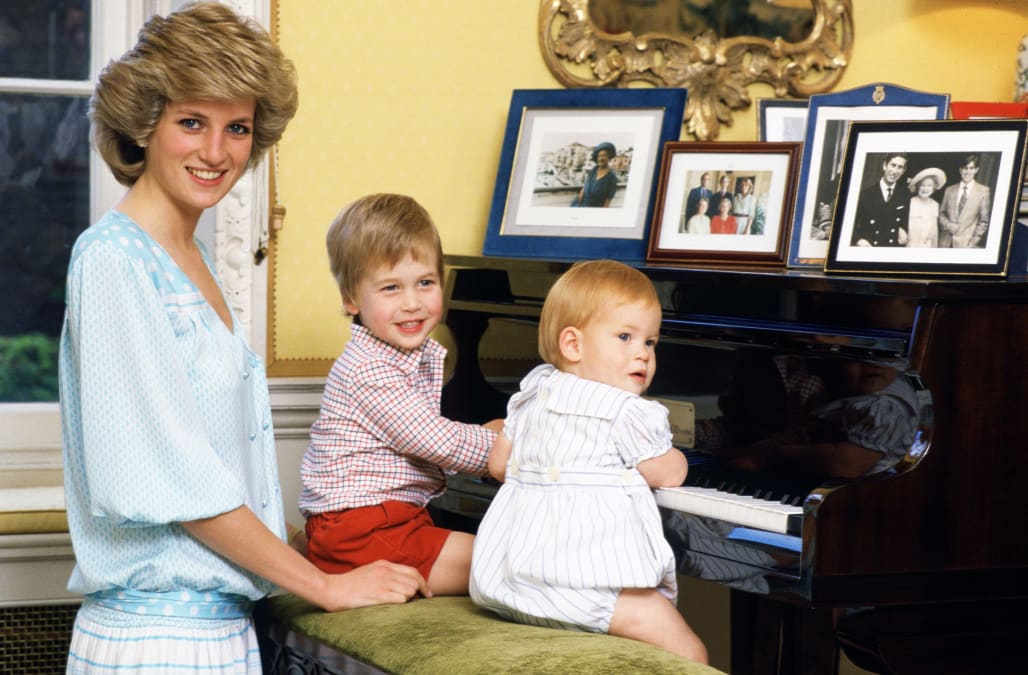 Just because you're a prince doesn't mean you don't crave chicken nuggets and pizza for dinner.

According to Darren McGrady, a former private chef to Queen Elizabeth and Princess Diana and author of The Royal Chef at Home: Easy Seasonal Entertaining, he had to get extra clever if he wanted William and Harry to eat their veggies at every meal.

His tactic? McGrady said he would mash up broccoli and hide it in the boys’ mashed potatoes. It was a method highly endorsed by Princess Diana since, while she was often cool with relaxing the rules when it came to her kids, she did prefer that they eat the same thing the grown-ups were having by default, McGrady explained. (Hey, how else are you going to raise adventurous eaters, right?)

RELATED: Inside the eating habits of the royal family

The diet of a prince doesn't just revolve around lobster platters and foie gras (as most of us are inclined to believe). While Prince Harry and William are royal princes by stature, they are known to have more common palates. Former royal family personal chef Darren McGrady told Marie Claire, "I remember Princess [Diana] came into the kitchen one day and said, 'Cancel lunch for the boys I'm taking them out, we're going to McDonald's. And I said, 'Oh my God your royal highness, I can do that, I can do burgers.' And she said, 'No, it's the toy they want.' Yeah, the boys loved McDonald's, and going out to pizza, and having potato skins—sort of the American foods." We don't blame them. McDonald's fries are addictive. Here's the secret ingredient.

Philip once made the staff swap dinners with him

Although it may be a rule of thumb that fancier dinners call for smaller portions, Prince Philip certainly abides by a different rule book. McGrady shares, "[Prince Philip] came into the kitchen and said, 'What's for dinner tonight?' And I said, 'I have these little one-inch eyes of lamb meat for you, your Royal Highness.' He looked and said, 'What's that—what are they?' And I said, 'Oh, those are chops, Your Highness.' He wanted to know who they were for, and I said, 'staff.' And he said, 'Oh, can't we have those?' I ended up giving him these big meatier pieces, and the staff had the other pieces." (Also, did you know the royal family is banned from eating shellfish in public?)

Princess Diana was on a very strict diet, but nobody suspected her bulimia

While most of us now know about Princess Diana's bulimia, you'd be surprised to hear about the extent to her strictly enforced diet. McGrady reports that he used to make her fat-free versions of dishes, and she would "trick" fellow guests at the table into thinking she was eating the same thing. In addition, red meat was completely off limits, and every meal was curbed into healthy eating: "One day she said to me, 'Darren, I want you to take care of all the fats, and I'll take care of the carbs at the gym.' We changed everything, I threw out my Buckingham Palace recipe book and got into healthy eating," says McGrady. "When she was at Buckingham Palace, her bulimia was definitely a hidden thing. We didn't know about it. It wasn't until she confronted it, and everyone put two and two together, that she started really healthy eating...she liked dishes like stuffed bell peppers and stuffed eggplant—she loved fish." (In Princes Diana's self-told story about Prince Charles, it is revealed that her husband had a huge impact on her eating disorder).

Prince Philip was not into Charles' organic food

Apparently, green eating just isn't for everyone. According to McGrady, Prince Philip wasn't as keen on organic fare as Charles was. "We always used to get a hamper [full of food and treats] from Harrods—a thank you gift for shopping with them. Prince Philip came into the kitchen and there were two hampers. He said, 'Oh, is this a Harrods hamper?" I said, 'No, your highness, this is a hamper the Prince of Wales brought with him.' He looked puzzled so I opened it up and I said, 'It's all organic.' And he said, 'Oh, bloody organic!' And just shook his head and walked out."

The family would lie to the Queen Mother about dinner time

You know that trick you use to get your constantly late friend to be on time? It's used in the royal palaces, too. McGrady reveals that because of Queen Elizabeth's tendency to arrive late to every family dinner, the rest of the family would lie about the dinner schedule so that she would actually show up at a reasonable time. "Dinner was at 8:30 in Balmoral when Her Majesty the Queen Mother was in attendance. They used to tell her that dinner was at 8:15, and she'd be the last one down. They told everyone else 8:30 because they knew she'd be late," he notes.

The Queen ate out of Tupperware

Turns out that even the Queen understands the value of practicality. While Her Majesty does eat food off of diamond-encrusted or solid gold plates (totally standard), McGrady informs that "at Balmoral she'd eat fruit from a plastic yellow Tupperware container." And that's not all–she would also dabble in some classic Kellogg's for breakfast from a plastic container which she would serve herself. (As a true Brit, it would come with a cup of Darjeeling tea).

If you're ever in need of a gift idea, take note from Queen Elizabeth: chocolate is always the way to go. "The Queen loves to eat any food from the estate—so game birds, pheasants, grouse, partridge—she loves those to be on the menu. But of course, she loves chocolate. That was her favorite, and it has to be dark chocolate. The darker the chocolate, the better."

Everyone must dress up for dinner

Although Balmoral (their Scottish holiday home) is where the royal family really lets their hair down, the typical dinner would normally entails Downtown Abbey levels of formal. "They'd come down in dressy ball gowns, and sit at the table—like a Downton Abbey dinner. All the fine china was brought out. At the end of the meal, a bagpipe player would walk around the table," McGrady says. Even so, nobody is perfect; McGrady also notes that Prince Philip was known to dress so tattily that he once mistook him for the gardener. (No matter how they're dressed, these are the 14 etiquette rules everyone in the royal family must follow.)

The method worked—in fact, he said it's the fastest way to get kids to ask for a second helping. Now, the question remains: Do you think Prince William tries this same approach with Charlotte and George?

More from PureWow:
Prince Harry Has Yet to Ask Prince William a Very Important Question About His Wedding
Breaking News: Meghan Markle Just Deleted Her Instagram and Twitter Accounts
Kate Middleton Wore a Gorgeous Navy Coat for Her First Public Appearance in 2018

Shope Cole Haan sneakers and shoes for under $40

5 best-selling audiobooks we can't wait to listen to