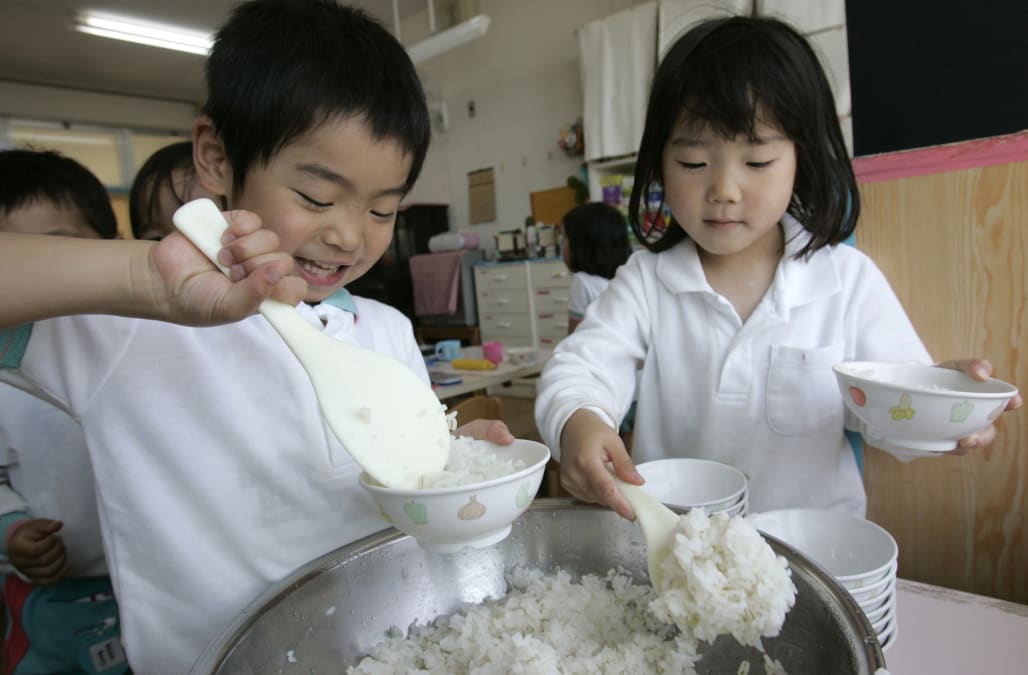 Japanese school lunches aren't synonymous with "mystery meat," but rather, shokuiku. It means "food and nutrition education," and it's a vital part of the Japanese child's early education.

Beginning in elementary school, kids come to understand that what you put into your body matters a great deal in how you think and feel throughout the day — and how you go about your life.

"Japan's standpoint is that school lunches are a part of education," Masahiro Oji, a government director of school health education, told the Washington Post in 2013, "not a break from it."

Here's what it looks like to be one of the global leaders in lunchtime:

Lunchtime in Japanese primary schools is almost sacred. It isn't hurried — kids get the time just to sit and eat, not to mention wash their hands in an orderly fashion.

Kids often sit in organized groups rather than a random free-for-all. The goal is to get students accustomed to discipline and cleanliness.
Kids also serve one another in an effort to reinforce a culture of self-sufficiency. In many schools, there is no janitor. Kids learn to pick up after themselves.

Rice has been a staple for decades, but it wasn't until the 1970s that school lunches began to look mostly like what they do today.

Another option might include tofu with meat sauce on rice, paired with a salad, apple, and carton of milk.

Lunch often comes with a main dish, rice, and a side soup. This lunch has miso soup, a small packet of dried fish, milk, rice, and pork fried with vegetables.

About 25 miles away, Yashima Junior High School offers students rice, pork, and egg; lemon yogurt; tofu seaweed soup; and milk .
The end result isn't just a satisfied student body, but one that learns responsibility and healthy eating habits. Japan's life expectancy is among the highest in the world, while it's rate of obesity is well below the global average.

With the end of any good meal comes one inevitability: naptime.

SEE ALSO: It just got easier to become a permanent resident of Japan — here's how you do it