This unlikely New York beach is the priciest beach in America 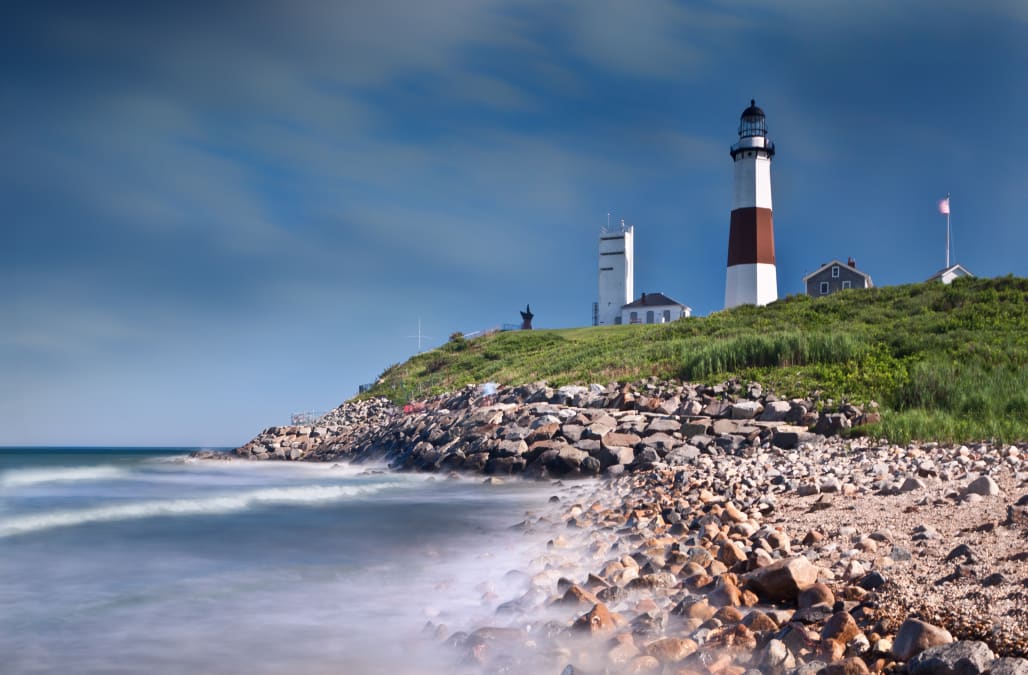 ​​​​​There are some things in life we just have to accept, like how planning a beach vacation is going to cost you big bucks.

Hotels sneak up in price the closer to a beach you get. And throw in a beach view room, and that Christmas wish list starts getting smaller.

But if you think back to high school economics - not all beach vacations are created equal -- like the old supply and demand rule.

East coast beaches have two to three months to make up a year's worth of revenue, that beaches in warmer climates benefit from.

Best Beach in Every State

Families flock to Alabama’s Gulf Shores, just an hour south of Mobile, to escape the heat of Bama summer. This public, white sand beach offers activity for the whole clan, from volleyball and boarding to deep sea fishing tours.

OK, you probably didn’t travel to Alaska to swim. But this stunning black sand beach with sweeping glacier views in Prince William Sound is a popular spot for kayaking and simply taking in the view.

On Arizona’s west coast you’ll find Lake Havasu’s famed hidden coves. The most popular spot is “The Sandbar,” where families gather to wade in the ankle-deep water.

The 1.5-mile stretch of sand just across the bay from San Diego sparkles in the California sunshine and is blessed with Mediterranean-like weather. The water is ideal for surfing and swimming.

Each spring, Medano Creek in Great Sand Dunes National Park fills with water flowing from the Sangre De Cristo Mountains, perfect for activities like skim boarding and tubing. But act fast; come August, the creek dries up until the next year.

This might be the most family-friendly summer spot in all of New England. Think raucous boardwalk, public pool and mini-golf courses galore.

Set in a quintessential beach town with an old-fashioned feel, Rehoboth is peaceful and clean yet active and amenity-laden (and a far cry from party-heavy nearby Dewey).

This barrier island set between Roberts Bay and the Gulf of Mexico is home to three popular beaches. The best, Siesta Beach, boasts turquoise waters and quartz sand.

Choosing the best beach in Hawaii is no small feat, but we’ll give it a go. Located in Oahu, Lanikai means “heavenly sea,” and it's easy to see why thanks to crystal blue water, soft sand, coral reefs and a protected lagoon that’s basically a swimmer’s paradise.

Bear Lake, set on the border of Idaho and Utah, is known as “The Caribbean of the Rockies” for its gleaming turquoise waters. On the northern and eastern shores you’ll find the state park, a popular spot for water sports and camping.

Who says you can’t find tranquility in the middle of the city? Just steps from Chicago’s Michigan Avenue, Oak Street Beach is surrounded by bars and restaurants, a running and biking path and a panoramic view of the downtown skyscrapers.

That said, if you do want a respite from Chicago, head to this state park about an hour east of the city. Here, the rugged dunes, quiet hiking trails and tranquil shores are the perfect counter to a bustling urban lifestyle.

Hello, classic lake vacation. Cabin rentals surround this reservoir on the Des Moines River. Outdoor activities are endless, but the real reason to come is for the fishing. Rent a boat for the day and cast a line for bluegill, crappie and bass.

This freshwater lake is surrounded by the Ogallala rock formation, making it one of the most interesting landscapes in a state known for, well, flatness.

Sure, this state park in south-central Kentucky offers great swimming, but it’s best known for fishing. During the daytime, locals cast their lines off the marina to catch local bass, bluegill and catfish--then by night they camp out and cook their haul.

Along Louisiana’s 26 miles of Gulf Coast beaches, Rutherford stands out for its shallow waters and undeveloped shoreline dotted with beach comb trees, driftwood and seashells.

Sunbathers, this one’s for you. The water in this stunning cove on the Atlantic Ocean hardly ever rises above 60 degrees, even in the warmest summer months. In other words, you probably don’t want to venture in the water.

This unspoiled beach on Assateague Island feels like a throwback to another era: The landscape is rugged, the buildings are scarce and wild ponies wander from the forest to the shores.

Many of Nantucket’s beaches are overcrowded with summer jet-setters, but not Cisco, the widest spot on the island. On your way, stop by nearby Bartlett's Farm to pack a lobster roll picnic lunch.

You’ll find a handful of beaches along the coastline of Sleeping Bear Dunes National Lake Shore, but none quite like Glen Haven, known for windswept dunes, turquoise water and quaint, nearby fishing villages.

There’s no shortage of swimming holes in the state dubbed "Land of 10,000 Lakes" but this one in Minneapolis has it all: Canoes and kayaks for rent, running and biking paths galore and calm water perfect for swimming.

Long Beach, located along Mississippi’s 26 miles of Gulf Coast, is a laid-back, Southern getaway just west of the popular vacation town Biloxi. Families bike to the public beach with picnic baskets and colorful kites in hand.

Lake of the Ozarks National Park has lots of beaches, but this lively enclave stands out. Home to the renowned “party cove,” Osage is a haven for rowdy boaters looking to drink, swim and otherwise get down.
Montana: City Beach

Along a seven-mile glacial lake in Whitefish sits the picturesque City Beach. With a roped-off swimming area, day boat rentals, lifeguards on duty, gazebos and picnic tables, it’s the perfect escape for the whole fam.

This reservoir on the North Platte River is seriously awesome if you’re into water sports. (Think: sailboating, waterskiing and scuba diving.)

On the east side of Lake Tahoe, Sand Harbor is a jewel in the Sierra Nevadas, thanks to glistening water surrounded by round boulders and a stunning view of the distant snowcapped mountains.

This state park, an hour north of Boston, is a New England favorite. Think: sandy dunes, an active boardwalk and sweeping shores along the pristine Atlantic Ocean. It also boasts an annual sand sculpture contest and fireworks every Wednesday night throughout the summer.

Of all the beaches that make up Cape May’s shore, Cove Beach is definitely the best. When you need a break from the sun, climb to the top of the famous Cape May Lighthouse for a panoramic view of the peninsula.

Cool off from the hot, arid weather at Cochiti Lake, a manmade beach on the Río Grande between Albuquerque and Santa Fe--and a total hot spot for camping and barbecuing.

This refreshingly laid-back enclave in Montauk is a far cry from the glitzy beaches of East Hampton. Come for the iconic lighthouse and scenic cliffs. Stay for the stellar surfing and a pressed sandwich from Ditch Witch food truck.

This barrier island stretches for about 70 miles on Carolina’s outer banks. The coast is lined with picturesque sandy dunes and ends at the lovely Bodie lighthouse.

Head to Icelandic State Park to relax on this mile-long sandy beach with a designated swimming area and adorable cabins for rent.

Set on the shores of Lake Erie, East Harbor State Park in Marblehead is a popular spot for boating, camping and swimming throughout the summer months. The lake is perfect for children since the water stays shallow far beyond the shoreline.
Oklahoma: Keystone State Park

Calling all teetotalers. Keystone Lake, found on the Arkansas River just 15 miles from Tulsa, contains three alcohol-free beaches. The most popular, Keystone State Park is great for families or couples looking for a low-key getaway.

On Oregon’s northern coast, about 80 miles from Portland, stretches romantic Cannon Beach. Its most notable feature is the 235-foot Haystack Rock rising out of the water.

This sandy peninsula that extends into Lake Erie contains about a dozen small and secluded beaches that open between Memorial Day and Labor Day.

Fred Benson Town Beach, or Crescent Beach, as the locals call it, is the most spectacular part of Block Island’s 17-mile coastline. With lifeguards on duty and cabanas, umbrellas and boogie boards for rent, it’s one of New England’s best summer spots.

This windswept haven is only a short drive from Charleston, but feels a world away. Plus, while most beaches on Kiawah Island are private and accessible only if you’re staying at a resort this one is open to any and everyone.

This lake in the southern Black Hills is known for crystal-clear waters and 36 miles of flat, sandy coastline.

Its convenient location, just ten miles from downtown Nashville, makes Percy Priest Lake a popular summer escape. Kayak to Luau Island, a secret spot in the middle, for a picnic lunch. Or if you’re a daredevil, try cliff jumping from the towering rocks.

Unlike the beaches of South Padre Island, which are filled with rowdy spring breakers, Malaquite Beach on North Padre Island is rarely crowded. Visit during nesting season, from April to July, and you could see hundreds of baby sea turtles break out from the sand and run toward the sea.

Vermont has a handful of picturesque beaches on the shore of Lake Champlain, but most have awfully rocky terrains. The beach at Sand Bar State Park in Milton, however, is sandy, shallow and great for kids.
Virginia: Chincoteague Island Shoreline

This 1.5-mile expanse of sandy shoreline on Madeline Island, the largest on Wisconsin’s 22 Apostle Islands, offers gorgeous views of Lake Superior and a rugged backdrop of sandstone bluffs.

A popular spot along the southern coastline of Olympic National Park, Ruby Beach is known for its picturesque sea stacks and shores lined with driftwood. When the sun goes down, campers pitch tents and light fires on the sand.

Sandstone cliffs, clean water and about 60 miles of shoreline are what you’ll find at West Virginia’s largest lake. Summersville Beach is also situated right on the dam of the Gauley River, home to some of the country’s best white-water rafting.

When you think of Yellowstone, you probably think of geysers and hot springs. But America’s favorite national park has some awesome swimming holes, too. We love Firehole River, a deep pool surrounded by indigenous rock.
Up Next

Maybe that's why a survey from Cheap Hotels found New York's Montauk beach the priciest beach destination in the US.

The web site's survey looked at the lowest price tourists would pay for a double room in the cheapest hotel in the busy month of August.

At its cheapest, Montauk averaged $312 a night.

Further up the coast is New England's Nantucket which comes in number 2. Across the country, Cannon Beach in Oregon comes in at 3 with the cheapest hotel averaging $262.

The only beach in a warm climate to make the top 5 was Santa Monica but it's the price to pay for being in California.

The 10 most expensive beach towns in the US