Calling all daredevils: Switzerland opens the longest pedestrian suspension bridge in the world 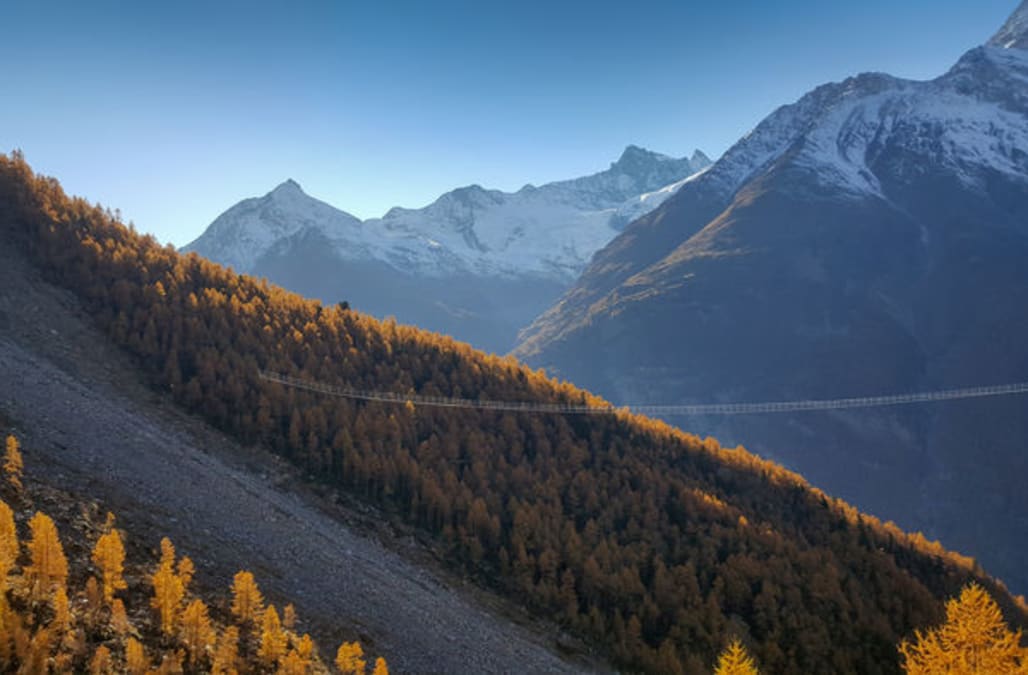 Calling all daredevils, we have another incredible destination to add to your travel bucket list.

Just last week, Switzerland just opened the longest pedestrian suspension bridge in the entire world. The Charles Kuonen Suspension Bridge runs between the Swiss villages of Grächen and Zermatt, offering tourists some of the most stunning scenery on the planet. 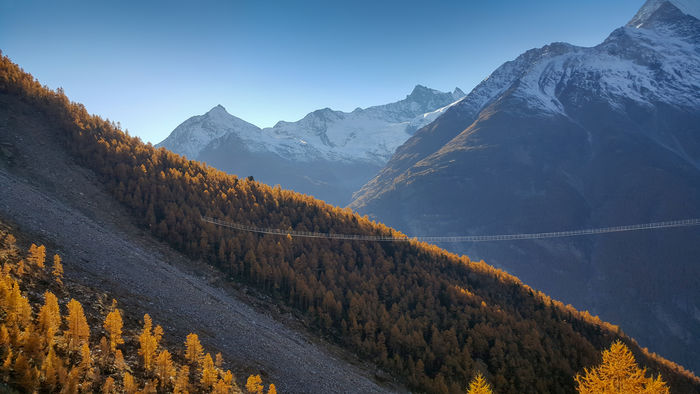 The bridge slices the journey time across the Swiss valley from three to four hours into to just 10 minutes.

But that's 10 minutes of heart pounding, adrenaline and extreme balance. With a length of 494 meters (or over 1620 feet), and, at most, rising a mere 2,200 meters (or 7218 feet) above sea level, the attraction is *not* for the faint of heart. After all, you're scaling between the tallest mountains in the entire country -- what else do you expect?

Related: These spots are only for the bravest of travelers

Chamonix in the French Alps.

The Chamonix Skywalk is a five-sided glass structure installed on the top terrace of the Aiguille du Midi (3842m), with a 1,000 metre drop below, where visitors can step out from the terrace, giving the visitors the impression of standing in the void.

Situated in downtown Dubai, the building was completed in October 2009. The building stands 829.8 metres tall, 2,722 feet. Visitors to Dubai can visit the buidling, with an observation deck on the 124th floor, named 'At the Top'. The views from the deck are stunning and give an amazing view of the surrounds of Dubai. The lift taking visitors to the deck hurtles guests at top speed and then allows them space outside to view the surrounds. There are 24,348 windows in the building. The building dominates for miles around and is truly a spectacular building of our day.

Picture shows the glass-bottomed bridge across the Zhangjiajie Grand Canyon on June 12, 2016 in Zhangjiajie, Hunan Province of China. The bridge stretched 430 meters long, 6 meters wide and the biggest vertical drop was 1,430 meters under the path. (Photo by VCG/VCG via Getty Images)

The observation deck of the 108-story Willis Tower (formerly named the Sears Tower), January 15, 2014. Over one million people visit its observation deck each year. The 1,451-foot building is home to United Airlines's main office.

It's a curved pedestrian bridge built on top of Mt. Machinchang at a height of 700 meters above sea level. The bridge is suspended from a 82 meter pylon swinging out over the landscape to give visitors a unique view of the surrounding area and neighboring islands.

The observation deck at the top of the tower becomes the Blackpool Tower Eye and features a skywalk made of glass overlooking the sea and the promenade.

Aerial view of tourists walking on the 100-meter-long and 1.6-meter-wide glass skywalk clung the cliff of Tianmen Mountain (or Tianmenshan Mountain) in Zhangjiajie National Forest Park on August 1, 2016 in Zhangjiajie, Hunan Province of China. The Coiling Dragon Cliff skywalk, featuring a total of 99 road turns, layers after another, is the third glass skywalk on the Tianmen Mountain (or Tianmenshan Mountain).

Steeplejacks celebrate the completion of electrical and construction work on Auckland's Sky Tower.

People on the 'Stairway to Nothingness' on the Dachstein Mountains.

Lion's Head is known for spectacular views over both the city and the Atlantic Seaboard, and the hike to the top is particularly popular hike in the city and people hike up during full moon. Its slopes are also a popular launching point for paragliders.

Traversing the Main Event section of the Via Ferrata.

The Capilano Suspension Bridge across the Capilano River in Vancouver, British Columbia, Canada, circa 1960.

'El Caminito del Rey', which was built in 1905 and winds through the Gaitanes Gorge, reopened last weekend after a safer footpath was installed above the original. The path, known as the most dangerous footpath in the world, was closed after two fatal accidents in 1999 and 2000. The restoration started in 2011 and reportedly cost 5.5 million euros.

"The thrill experienced high over the precipice is indescribable," said Daniel Luggen, the Director of Zermatt Tourism, according to CNN.

Understandably, Zermatt's website is sending a warning to shaky travelers. "For hikers with no fear of heights. Grated way over bridge. Through this, it is possible to look into the precipice below one's feet," it boldly states.

Related: Unique bridges from around the world:

15 PHOTOS
Unique bridges from around the world
See Gallery

Unique bridges from around the world
Spain, Biscay, Basque Country, Steps to the San Juan de Gaztelugatxe, chapel on a rocky island
Moment RF
Rolling bridge Paddington Basin, London UK. (Photo by Photofusion/Universal Images Group via Getty Images)
Worlds highest and longest glass Bridge as of 2016 in Zhangjiajie, CHunan, China
Si-o-se Pol (Persian bridge) or bridge of 33 Arches, also called Allah-Verdi Khan bridge, one of eleven bridges of Isfahan, Iran.
HALSTEREN, THE NETHERLANDS - UNDATED: The 'Moses Bridge' constructed over a 17th century moat and fortress in Halsteren, The Netherlands. Dubbed the Moses Bridge, this incredible structure literally splits the water way to allow people across. The Biblical feature in Halsteren, in the Netherlands was created to allow visitors access to a 17th century fortress. However, designers RO&AD were charged with creating a feature that did not ruin the original look of the castle's moat. So inspired by Moses, who split the Red Sea to allow the Israelites to flee the advancing armies of the Egyptian Pharoah, they created the 'invisible' bridge. 'Its construction is entirely made of wood, waterproofed with foil,' said Ad Kil, a spokesperson for RO&AD. 'The bridge lies like a trench in the moat, which is shaped to blend in with the outlines of the landscape.' A pump has been integrated into the sunken bridge to stop water flowing into the cavity and stopping it from flooding. PHOTOGRAPH BY RO&AD/ Barcroft USA /Barcoft Media via Getty Images
SPAIN - 2006/10/26: The Puente Nuevo, a bridge over the El Tajo gorge and Rio Guadalevï¿½, spanning the gorge in the historic city of Ronda in the Spanish province of Malaga in Andalusia, Spain. (Photo by Wolfgang Kaehler/LightRocket via Getty Images)
The bridge connects Middlesbrough on the south bank of the River to Port Clarence on the north bank. It is a transporter bridge, carrying a moving cradle or gondola suspended from the bridge, across the river in 90 seconds. The gondola can carry 200 people, 9 cars or 6 cars and one minibus.
Henderson Waves is pedestrian bridge, Singapore.
Panorama-Blick vom 700 Meter hohen Berg auf Hï¿½gebrï¿½cke 'Sky-Bridge' ('Himmelsbrï¿½cke') mit Besuchern und dahinter Meer Adamanen-See, Insel Langkawi, Provinz Pantai Tengah, Malaysia, Asien, Inseln, Reise, NB, DIG; P.-Nr.: 1836/2011, 25.11.2011; (Photo by Peter Bischoff/Getty Images)
Canal barge crossing Telford's Pontcysyllte viaduct, near Llangollen, Wales. (Photo by Universal Images Group via Getty Images)
Night view of the Infinity Bridge, a public pedestrian and cycle footbridge across the River Tees in the borough of Stockton-on-Tees in the north east of England.
Dragon bridge cross Han river with reflection at Danang city, Vietnam in August 15th 2014
Moment RF
GATESHEAD, ENGLAND - JUNE 21: The Millennium Bridge opens as part of the opening ceremony for the European Athletics Team Championships at the Quayside on June 21, 2013 in Gateshead, England. (Photo by Stu Forster/Getty Images)
Up Next

More from AOL.com:
The worst countries to travel alone, ranked by perception
Primera Air just announced flights from the U.S. to Europe for $99
Alton Brown just named this city the 'top food town in America'

These $50 headphones are just as good as AirPods