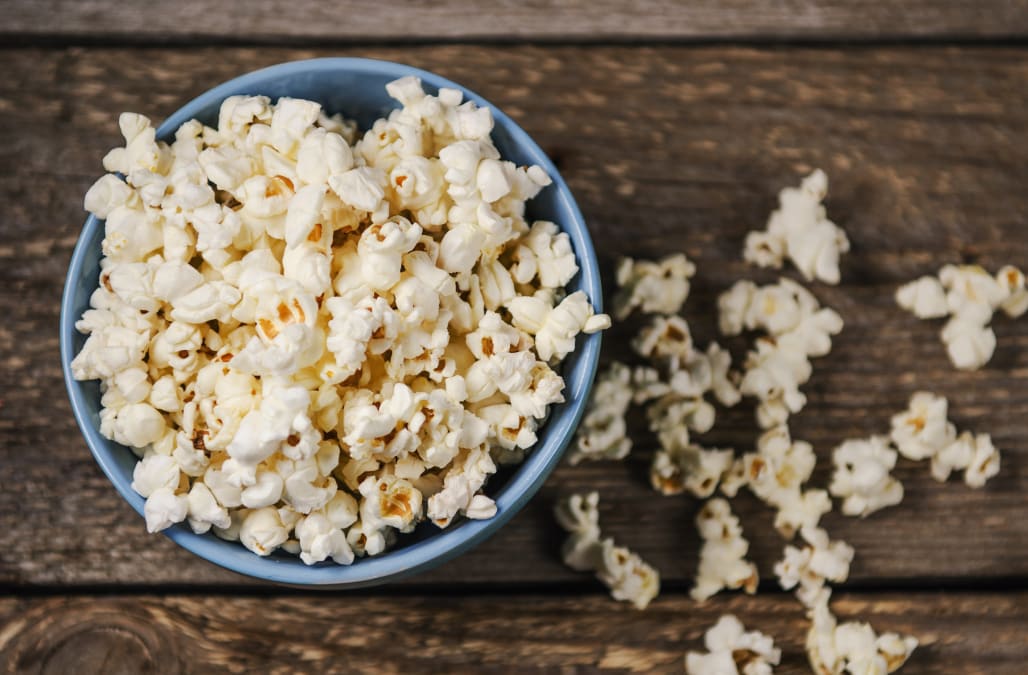 ​​​​​​There are two kinds of people in this world: Those who abide by the 3-meals-a-day policy... and those who don't. If you fall into the latter category, you're probably a grazer -- someone who likes to snack all day, eating when you're hungry, or whenever food is in sight (aka us).

See more foods you can eat without gaining weight:

If it's not smothered in buttered, doused in seasoning or salt, popcorn makes for a great snack. If air-popped, the light, low-calorie snack can be a good source of fiber, without the cholesterol. Plus, it's considered a whole grain!

Since celery is mostly water, the fibrous plant has been known to offer many health benefits.

A great source of calcium and vitamins, cottage cheese is a go-to snack for many looking to maintain their weight. High in protein (28 grams in 1 cup of low-fat) it's recommended highly by nutritionists and athletes. The calcium-packed snack will help you feel full as it is "associated with metabolic processes that reduce fat accumulation and accelerate fat loss," according to Authority Nutrition.

The fruit is low in saturated fat, is a great source of antioxidants and dietary fiber -- and thus, can be a healthy snack for those looking to maintain or even lose weight.

With only 52 calories in half of the fruit, the citrus makes for a refreshing breakfast or snack. Packed with antioxidants, vitamins and nutrients, the fruit is known to boost metabolism and lower insulin levels -- thus, actually burning fat!

Chicken and other lean meats

A healthy source of protein, chicken helps fill you up while giving you energy. Fried chicken doesn't count!

Salmon is one of the healthiest foods out there, packed with nutrients and vitamins such as vitamin D. It'll also fill you up, without making you crash.

We get it. While it's often hard to resist free food in the office, bread baskets and the temptation of your grandma's pantry, not all snacks are created equal. There is a way to feel full, without feeling like you've overeaten -- and without worrying about an expanding waistline.

So stock that fridge up at work, and surround yourself with foods you shouldn't feel guilty about munching on!

The "Honey Boo Boo" star documented her weight loss journey on her very own reality show! She is now down to a size 4 -- and she looks incredible!

Hard work does pay off! The youngest Kardashian sister is obsessed with exercising and documents all her workout sessions on social media.

The "Girls" star lost a significant amount of weight after going on a holistic diet to help alleviate symptoms of endometriosis.

The TV personality revealed in 2015 that she lost 50 pounds over the course of three years with a healthy diet that doesn't include refined sugars, meat, dairy or "eating after dark." It looks like she's been committed to the strict diet. She looks better than ever in 2017!

The actress lost 20 pounds when she appeared on "Dancing With the Stars" in 2011.

Hard work pays off! "American Idol" alum began her weight loss journey by walking around her neighborhood and the rest was history! Her favorite workout? Zumba.

The "Rules of Engagement" star is a total fan of Jenny Craig for its simplicity. She looks incredible and totally glowing!

Talk about a transformation! Hill has lost weight and gained weight through the years -- depending on the movie he's working on -- but his latest transformation is absolutely jaw-dropping.

Smoke show! The songstress dropped 20 pounds over the course of one year. Doesn't she look incredible?!

The country crooner slammed critics who accused her of having weight loss surgery. She revealed that she dropped the pounds the old-fashioned way -- eating right and working out with her trainer!