18 of Earth's most otherworldly and unique caves 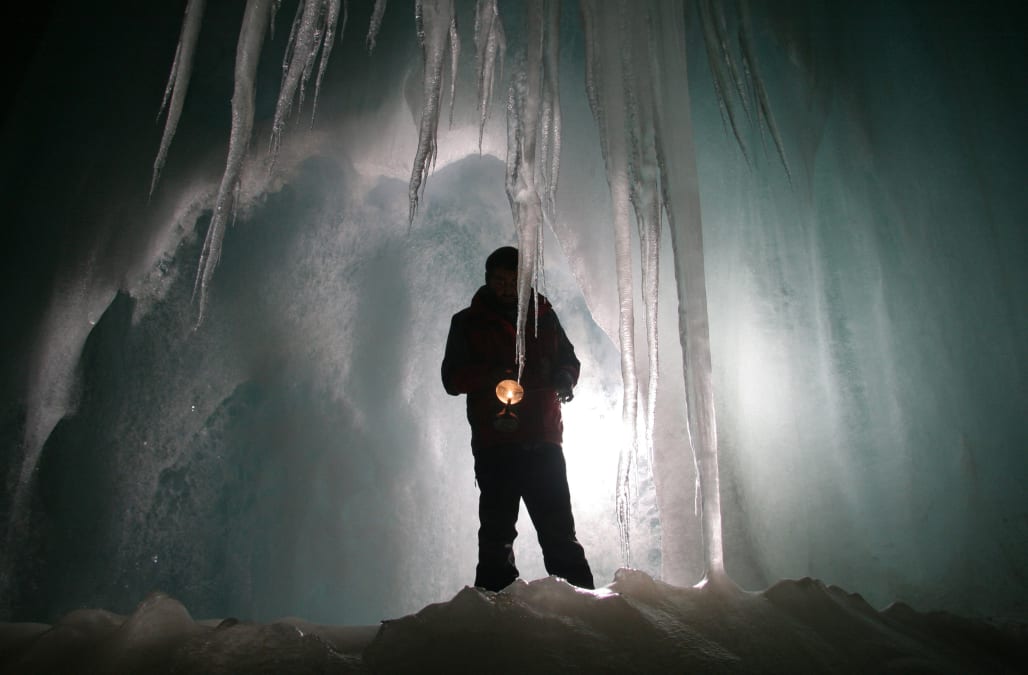 Caves have been home to some of the most fascinating legends in modern history.

From the cavernous version of hell in Dante's "Inferno" to epic kingdoms underneath mountains in J.R.R Tolkien's "Lord of the Rings" series, fictional battles throughout history have taken place in dark, gaping crevasses of earth.

Researchers speculate that a giant cavern discovered in southern Greece in 1958 helped serve as the inspiration for the mythical ancient Greek underworld Hades. And although pundits are reluctant to place the island Odysseus was shipwrecked on in Homer's "Odyssey," Croatian locals say the hero swam to a cave on Mijet Island near Dubrovnik.

Don't be surprised if some recent cave discoveries start to influence fiction, as well.

It was only in 2006 that researchers found 'Cueva del Fantasma' -- Spanish for 'Cave of the Ghost' -- a collapsed gorge hidden within the jungles of Venezuela that is big enough to fly helicopter through it unscathed. There is even a picture-perfect waterfall thundering down the cave's mouth.

Three years later, a group of explorers were finally able to propel 80 meters down into the Hang Don Doong cave in Vietnam, a hidden space so big that it could fit a Manhattan city block complete with 40-story skyscrapers.

You don't have to plunge into a dense jungle to stumble across some of the world's most interesting caves. Located in central Slovakia, the Ochtinska cave is a UNESCO World Heritage Site filled with peculiar tufts and spikes of aragonite like a natural Chihuly sculpture. Pop over to neighboring Austria and you will find the world's largest ice cave just outside of Salzburg.

World's coolest caves
Fingal's Cave on the Scottish Inner Hebrides island of Staffa.
The distinctive quartzite Tepuis of #Venezuela provided the magical setting for Arthur Conan Doyle's - #TheLostWorld. In the book the #explorers traveled by very traditional means, but for us last month, we had the advantage of flying around in a helicopter to search for #caves. We were very lucky to find this spectacular #cave entrance, which was large enough to fly the helicopter straight into! Can you spot it on the rocks to the left of the lake? Huge thanks to the team of La Venta, #Theraphosa, @geomagazin @Rolex Award, and so many others. Thank-you! #Tepui #exploration #raulhelicopter #GranSabana #CuevaFantasma
Detail of aragonite shape from Slovakian aragonite cave
Werfen, Salzburg Province, Austria, Europe
WAITOMO, NEW ZEALAND - DECEMBER 07: Waitomo Glowworm cave on December 07, 2010 in Waitomo, North Island, New Zealand. (Photo by EyesWideOpen/Getty Images)
URAL, RUSSIA - UNDATED: EXCLUSIVE Cave divers from the Orda Cave Awareness Project explore the beautifully transparent Orda Cave in Russia's western Urals region. A team of daring cave divers have produced an incredible photo-reportage of the longest underwater gypsum cave in the world. Gypsum is a mineral that can form into clear crystals and is responsible for the amazingly transparent mineral water and eye-popping natures of the gullies and rock formations. The Orda Cave in Russia's western Urals region is three miles of eerily dramatic natural channels created by water so clear divers can see over 50 yards into the deep. Over a period of six months the intrepid team led by underwater photographer and journalist, Victor Lyagushkin, 40, from Russia explored the water filled cave tunnels at temperatures barely above freezing. Together the divers documented their journey into Orda Cave as part of a project to raise awareness of the beauty and fragility of this little explored natural wonder. Even air bubbles can damage the ceiling of the cave - which meant Victor's team had to construct an underwater funnel to take their air bubbles safely to the mouth of the cave. In France Gypsum was commonly ground up and used as plaster in construction - which is where the name 'plaster of Paris' is thought to have come from. (Photo by Victor Lyagushk / Barcroft Media / Getty Images)
This Ice-cave is in the largest glacier in Europe, Vatnajokull in Iceland. The roof is translucent letting the daylight in.
View of formations along the wall of the Big Room, near Crystal Spring, Carlsbad Caverns National Park, New Mexico, 1942. (Photo by Ansel Adams/National Park Service/Buyenlarge/Getty Images)
Throwback to a photo of @justsuboi and I in the most amazing place in the world, Son Doong Cave in Quang Binh, Vietnam. In the last few days, there have been reports that a large Vietnamese corporation has been visiting the cave to plan for a massive cable car construction project. There is a grassroots movement in Vietnam to save Son Doong and we're hoping it's successful. Environmental treasures like this need to be preserved and protected, not exploited for commercial gain. #savesondoong #tbt
USA, New Mexico, Carlsbad, Carlsbad Caverns National Park, Awe-Inspiring Carlsbad Caverns (Photo by: JTB Photo/UIG via Getty Images)
Beautiful Skocjan Caves, Natural Heritage Site in Slovenia
BORNEO, MALAYSIA - UNDATED: *** EXCLUSIVE *** Deer Cave in Mulu National Park, home to over 3 million bats that roost in the roof of the cave some 140m above the floor in Borneo, Malaysia. Incredible never-before-seen pictures show the latest British expedition into a never-ending cave network that contains the largest cave chamber in the world, the largest cave by sheer volume in the world, and the largest cave passage in the world. In an historical British venture that stretches back to 1978, the British team has been visiting and attempting to map the twisting chambers of Mulu National Park. With new caves discovered regularly the ever-expanding task of creating a definitive subterranean map just keeps growing. Over 30 years ago the Royal Geographical Society led the first expedition - of which current team member Andy Eavis was part of. Since then over 186miles have been mapped out with the latest team - a group of avid underground scientists and cavers - adding a few more miles. Using lasers and other equipment, they record the dimensions of each unmapped area. This year the intrepid homegrown team also helped Borneo's National Parks authority to help map the area above the caves so tourists trekking between the hundreds of cave mouths know where they are in relation to the caverns below them. (Photo by Robbie Shone / Barcroft Media / Getty Images)
Majlis al Jinn is the second largest known cave chamber in the world. Never in my life have I thought I will be descending the cave which @chris_sharma rock climbed and @officialfelixbaumgartner based jumped. Thank you @toufic_13! #nofilter
Capri Island
Hemis.fr RM
A caver descends a distance longer than the Chrysler Building to get to the floor of the Cave of Swallows in San Luis Potosi, Mexico. Reaching the bottom gives you a feeling of relief that nothing went wrong with the descent, and the environment down there feels other-worldly—like setting foot on the moon. Photo by #MHWAmbassador @josh_hydeman
I am currently curating an assignment with @natgeoyourshot called "Facing Your Fears," inviting you to use your photography as a creative canvas to understand and express your fears. To submit your photos and stories, go to natgeoyourshot.com. There are only 6 days left! Following a college art project in which I painted giant oil, acrylic and linseed oil canvases of the view looking down skyscrapers in Manhattan, NYC, I had faced and overcome my fear of heights, enabling me to take photographs like this one deep underground in China in one of the worlds largest vertical pits. At over 1500ft (500m) deep, Miao Keng in Wulong, China is taller than the Petronas Towers in Kuala Lumpur. Link in my bio #natgeoyourshot
Cave entrance
Up Next

More from AOL.com:
How to make the most out of your vacation