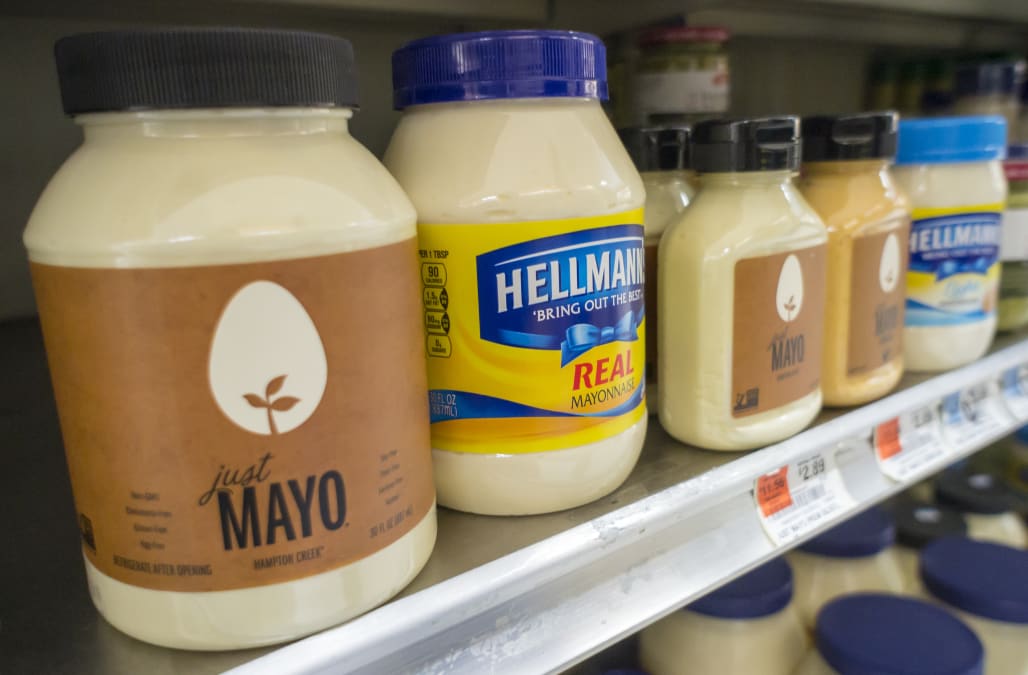 Mayonnaise might be one of the most polarizing condiments on the face of the planet. You either love its creamy, tangy goodness, or you audibly gag at the mention of it. (If you're in the latter category, we suggest you stop reading NOW.)

Even those who are mayo lovers have strong opinions on which brands are best (yes, there is a world beyond Hellmann's). So to determine which mayos are the real cream of the crop, we came together as a team and forced ourselves to try a variety of popular grocery store brands. Luckily, we had ample waffle fries to help us on our quest, and to our pleasant no one's surprise, the combination was pretty freakin' delicious.

Judging on a combination of texture and flavor, we put the classics to a blind taste test. Though no light varieties were allowed, we did throw two vegan options into the mix. (Spoiler: Most of us couldn't tell which were vegan and which weren't.) In the end, a few brands rose to the top, claiming their place as the true sandwich spread kings of mayo-dom.

The best brands of mayo you can find at the grocery store
Our Top Picks
(1) Sir Kensington's All-Natural Mayonnaise, $5

With a punch of tangy lemon, a distinctly artisanal taste and smooth texture, Sir Kensington's quickly topped our list as the most gourmet mayo of the taste test. Our editors felt that it tasted almost homemade, wasn't too thick or too sweet, and made the perfect dip for fries or spread for a sandwich (although it resembles more of an aioli than a mayo). In the end, it was the most expensive for its small 10-ounce size, but the quality was worth the price.

We know what you're going to say: Miracle Whip isn't exactly mayo. It has all mayo's key ingredients, but also has added seasonings that really set it apart in this test. Editors thought it tasted nostalgic in the best way: like something they'd put on a ham and cheese sandwich as a kid, with a familiar sweet onion or pickle-like taste that's bound to be a favorite among kids. It has a great fluffy texture (hence the "Whip" part) and quickly stole our hearts.

The mayo by which all others are often measured wasn't immediately our favorite, but its classic taste still landed it in our top three. Tangy, subtle and creamy, it was described as "very standard" mayo by our tasters. You can never go wrong with Hellmann's, but it lacked some of the added punch of our other favorites.

For a vegan mayo, this brand's taste was pretty exceptional. None of our tasters could detect the lack of eggs, and its zesty tang tasted almost identical to its original counterparts. The texture, however, was distinctly thicker and "gloopier" than egg-based mayo, making it harder to dip and spread, and left a slight waxy film on the palate. Still, for those seeking a vegan option, this brand can't be beat.

This classic brand was everything a mayo should be but still very standard in its taste. Subtle and eggy with a light and airy texture, it made for the perfect sandwich mayo but left little to be desired as a dip for fries.

Unlike Just Mayo, the fact that this option was vegan was a little more obvious to our tasters, although many were still fooled by its flavor. Very white in color and a bit waxy in texture, it came off as slightly more artificial than regular egg-based mayo but still had a pleasantly garlicky, salty taste. Although it couldn't hold up to the other mayos, it was a strong contender in the vegan category.

Disagree with our ranking? Let us know in the comments.

More from Tasting Table:
95 Percent of San Marzano Tomatoes Sold in the U.S. Are Actually Fake
Make a Fourth of July Menu to Remember
7 Restaurants L.A. Locals Don't Want You to Know About