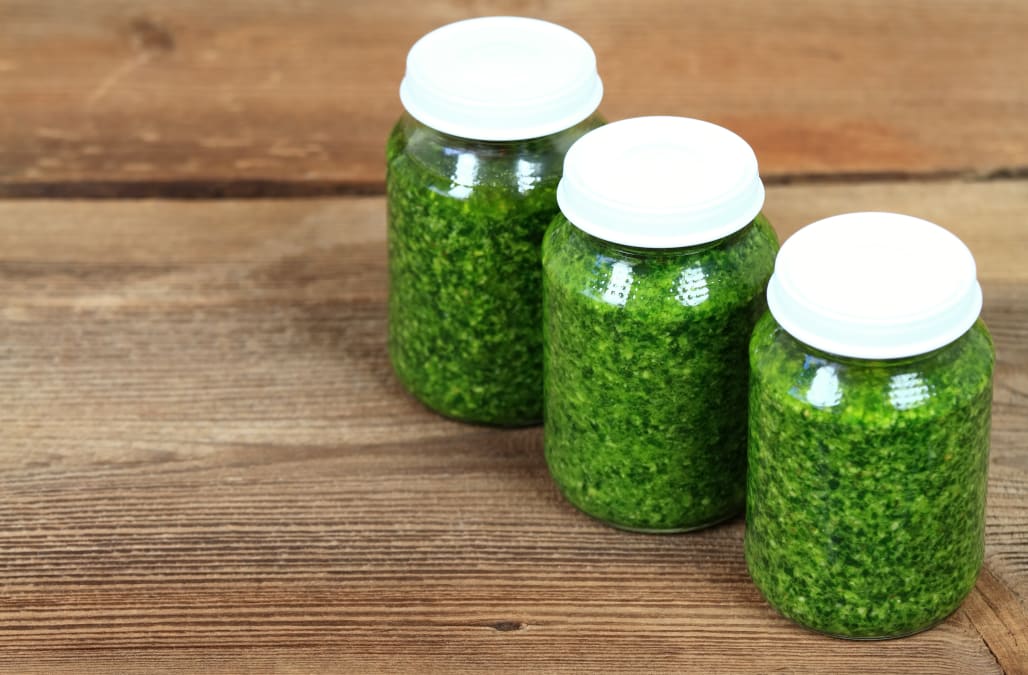 We all hate that we can only take 3 ounces of liquids in our carry-ons at the airport and inevitably end up wasting half the product trying to get it into those tiny little bottles.

Well, an airport in the Italian city of Genova is allowing people to carry up to 17 ounces of one liquid on their flights... pesto pasta sauce! Pesto is Genova's favorite food, originating in the Northern Italian city in the 16th century.

It is made up of garlic, pine nuts, basil, cheese and olive oil crushed together.

Learn how to make an Italian wedding soup like never before.

Get the Recipe: Italian Wedding Soup

"If you don't have super-ripe tomatoes, don't fret -- the true cheese connoisseurs of La Sorgente prefer slightly underripe tomatoes so the juice stays in the tomato and not on the plate, and underripe tomatoes provide a nice acidity that complements the dense mozzarella."

Get the Recipe: Caprese Salad

"This is not your grandmother's lasagna--which might call for two pounds of cheese (2,930 calories and 189 fat grams)--but it will resonate in flavor and, just as important, take less time to assemble and cook."

Get the Recipe: Lasagna Bolognese

Get the Recipe: Pollo Al Forno

"This is a great dish for anyone who loves fish."

Get the Recipe: Tuna Crudo

"When you're cooking the sausage, don't put the heat on full blast or you will risk breaking the casings."

Get the Recipe: Sausage and Peppers

Orecchiette with Sausage and Broccoli Rabe

"Paired with (high-fat) pork sausage, this dish is a staple of Italian-American menus."

Get the Recipe: Orecchiette with Sausage and Broccoli Rabe

"Because most Italian green sauces are uncooked, they go together quickly in a blender or food processor and are excellent at the last minute on grilled or poached seafood, meats, poultry, and vegetables."

Get the Recipe: Swordfish with Salsa Verde

"You can enjoy this classic fettuccine guilt free."

Get the Recipe: Cacio e Pepe

"Thick, boneless chicken breast is swaddled in whole wheat panko bread crumbs instead of the usual entombment of nutritionally bankrupt white bread crumbs. This is followed by a veneer of tomato sauce and a layer of fresh mozzarella and Parmigiano Reggiano."

Get the Recipe: Chicken Parmigiana

Peaches and Prosecco with Almond Cream

"Peaches are a perfect dessert unembellished, but this dessert version of the Bellini cocktail, combining the peaches with Prosecco (Italian sparkling wine), is not to be missed."

Get the Recipe: Peaches and Prosecco with Almond Cream

"Like pasta, farro absorbs whatever flavors you add to it, making it a great substitute for the typical white rice in risotto."

Get the Recipe: Farro Risotto with Mushrooms

"Pomodoro simply means “tomato” in Italian. This pasta is basically just that, pasta and tomatoes. This dish embodies the core philosophy of great Italian cooking: Few ingredients at their peak equals lots of flavor."

Get the Recipe: Spaghetti Pomodoro

The city is very proud of their pesto history and airport security was getting frustrated of having to throw away perfectly good food.Now the locally made sauce is exempt from the liquid limit.

With a 50 cent donation to Flying Angels, a local charity that helps children travel overseas for treatment of serious illnesses, passengers can take their delicious souvenir home with them and feast on a delicious pasta genovese.

Plus, you won't have to spend any time filling up those pesky little bottles.

Related: Best airports in the world:

15 best airports in the world

Why it's awesome: Copenhagen is one of the busiest hubs in northern Europe and is a major base of operations for Scandinavian Airlines and Norwegian Air Shuttle.

Skytrax reviewers lauded the airport for its clear and well-placed signs and the efficient, though sometimes crowded, facilities.

Why it's awesome: Narita is the first of the two Tokyo airports to appear on the list. Located 35 miles outside of Japanese capital, Narita handles most of the international traffic going in and out of the city. The airport serves as a major hub for ANA, Japan Airlines, Delta, and United.

Why it's great: Vancouver takes home the prize as the top-ranked airport in North America for the eighth year in a row, and for good reason. Customer reviewers on Skytrax cited YVR's friendly staff, high level of organization, and easy access to downtown Vancouver as some of the best things about the airport.

Vancouver International also boasts a floatplane terminal, as well as a sizable collection of art from the Pacific Northwest.

Why it's awesome: Located on an artificial island in the Osaka Bay, Kansai International is a major hub for ANA and Japan Airlines.

Why it's awesome: Amsterdam's Schiphol Airport is one of the busiest airports in Europe and serves as a hub for KLM, Transavia, and Delta.

Opened in 1916, Schiphol is noted for its wide variety of leisure activities and has a library in which fliers can cozy up with a good book while waiting for their flights.

Why it's awesome: Frankfurt Airport is the fourth-busiest airport in Europe and one of the most important transit hubs in the world. FRA is home base to Lufthansa's fleet of more than 270 jets.

Skytrax reviewers praised the airport for the ease of transit between terminals and the abundant shopping and dining options. Some, however, have complained of lengthy lines at immigration.

Why it's awesome: Heathrow is the world's third-busiest airport and the largest of the five primary airports serving London.

Heathrow is in the midst of a major renovation with the addition of a new Terminal 2 building. It's eight-year-old Terminal 5 building was named the best airport terminal in the world by Skytrax.

Heathrow serves as the main hub for British Airways and Virgin Atlantic.

Why it's awesome: Just 8 miles from the heart of Zurich, the airport serves as the home for Swiss International Air Lines and as a hub linking Switzerland's largest city with the rest of the country.

For passengers with an extended layover, Zurich Airport offers bicycle and inline-skate rentals and excursions to the Swiss Museum of Transport Lucerne.

Why it's awesome: Built on an artificial island in the middle of Ise Bay near the city of Nagoya, Central Japan International — also known as Centrair — is a focus city for Japan Airlines and ANA.

Centrair holds the distinction as the best regional airport in the world.

It has a 1,000-foot sky deck, where passengers can watch ships sail into the Port of Nagoya. There's also a traditional Japanese bathhouse, where you can have a relaxing soak while watching the sunset over the bay.

Why it's awesome: Hamad International opened for business in 2014 and is now home to Qatar Airways.

The airport and its two terminals sit on 5,400 acres of land and cost $16 billion to construct. Skytrax describes the facility as the "the most architecturally significant terminal complex in the world, as well as being the most luxurious."

Why it's awesome: Built on an artificial island off the coast of Hong Kong, HKG has become one of the most popular facilities in the world since it opened in 1998.

One of the busiest airports in Asia, Hong Kong International serves as the home to Cathay Pacific, Hong Kong Airlines, and Dragonair.

Be sure to play around at the SkyCity Nine Eagles golf course near Terminal 2.

Why it's awesome: Located northeast of downtown Munich, MUC is one of the busiest airports in Europe and the second-busiest in Germany, after Frankfurt.

Munich serves as a major hub for Air Berlin, Lufthansa, and Condor, and it features airy, glass-heavy architecture. A nearby visitors park features mini golf and a display of historic aircraft.

Why it's awesome: Incheon maintains its place as once of the world's elite airports with a third-place finish. Located on an island just outside of the South Korean capital, Incheon is home base to Korean Air and is the 24th-busiest airport in the world. It opened in 2001.

Incheon's highly regarded facilities feature an array of shopping and dining options, in addition to a bevy of cultural performances. The airport even has a Korean culture museum.

Why it's awesome: Haneda is one of two major international airports that serve the Tokyo area. Located a few miles from the heart of the Japanese capital, Haneda has proved to be a popular port of entry for business travelers and tourists.

The world's fifth-busiest airport, Haneda is known for its service efficiency, cleanliness, and shopping.

Why it's awesome: For the fifth year in a row, Changi takes the crown as the world's best airport. Changi serves as home to Singapore Airlines, Silkair, and Tigerair, and it's the 16th-busiest airport in the world.

The Singaporean airport has received praise from flyers for its beautiful architecture, efficient operation, luxurious amenities, and dining and shopping options.

Flyers passing through are treated to movie theaters, a multimedia entertainment deck, spas, and a wild corkscrew slide.

16 of the best puffer coats to shop this winter

Here's how to sign up for Peacock free of charge